Our partner, the Belize Foundation for Research and Environmental Education, tells us the community and farmers were excited to show off the new nursery that they and BFREE have set up. Credit: BFREE

What makes it outside the box? The funding comes from a $3.7 million restoration settlement with companies responsible for contaminating the land and water around an Ashland, Mass., industrial site. The settlement was reached in 1998 for natural resources harmed by mercury and other contaminants at the Nyanza Chemical Superfund site. 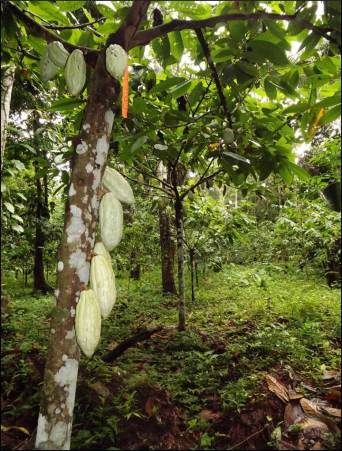 An example of a cacao forest, which provides habitat for overwintering birds. Credit: BFREE

How is it going down? Interested farmers will transition from intensive agricultural to sustainable agroforestry for cacao. Cacao, unlike pineapple and banana, can be grown under a mixed forest that provides great feeding and resting habitat for neotropical migratory songbirds and nesting habitat for resident songbirds. Farmers will be trained and receive funds to reforest cleared land and develop shade-grown agriculture, providing significant cost-effective benefits to birds and remaining economically sustainable for the local community!

Who’s doing it? The funding was allocated with public input by the government natural resource agencies in Massachusetts (called natural resource trustees), including the U.S. Fish and Wildlife Service, the state and the National Oceanic and Atmospheric Administration. The Belize Foundation for Research and Environmental Education is overseeing the effort on the ground.

Settlement funds will also go to 10 other projects restoring migratory and coldwater fish habitat; protect land to conserve wildlife habitat; create public access to the river in Ashland and Sudbury; create a nature preserve in Framingham and Ashland; and control invasive aquatic weeds in the Sudbury River to improve recreation and wildlife habitats and diversity.

Here’s an example of a degraded farm/banana growing operation. Farmers will convert from these to sustainable agroforestry for cacao. Credit: Mark Barash/DOI

A photo of the nursery for the cacao plants. Credit: BFREE

These natural resource damage settlements fund restoration projects where the contamination occurred or at an alternate location which, when restored, provides a suitable replacement for the injured or lost resources. Sometimes the responsible party donates land to be restored and protected. Restoration can also be in the form of restoring populations of injured resources such as birds or freshwater mussels.

In this situation, funds are going to help birds that visit the Sudbury River watershed but that need conservation in their wintering grounds. With a relatively small investment of restoration dollars, we are already having an impact on restoring habitat for neotropical migrants in Central America.

Read more about the Belize project in the restoration plan.

9 thoughts on “Growing chocolate for the birds”