As part of the Young N’ Wild series we are running all summer, meet Audrey Bonk, a participant in the 2013 Career Discovery Internship Program, which is a partnership between the Service and the Student Conservation Association. Audrey is working at the Service’s Chesapeake Bay Field Office in Annapolis, Maryland as a biological intern. Check out this entry from her blog, originally published on 6/23/2013!

This past week has been out of this world! It was my first time (and certainly not my last) being out to Poplar Island, a 1,140-acre reconstructed island in the Chesapeake Bay, about a mile east of Tilghman Island. I was on the island every day this week except for Monday.

Basically my week consisted of this. . . 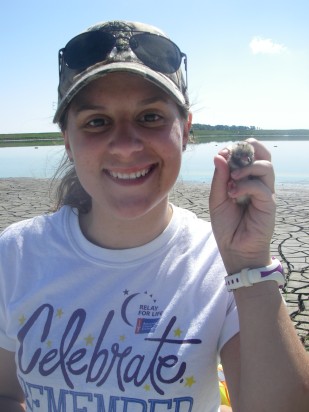 Me holding a least tern chick! 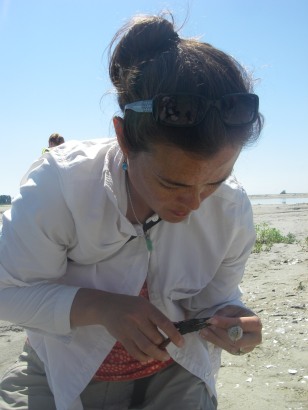 Least tern and common tern nest surveys and chick banding! Not only was it my first time seeing any kind of tern but I also got to hold a couple of the chicks!

There are many bird colonies on Poplar Island, which is a habitat restoration project, and terns are one of the many. A group of us walked through common and least tern colonies and checked the status of the nests. After a walk through, we began collecting chicks to band. Each chick got two bands, a metal one with an I.D. and a plastic one that you can read from afar with a scope. We took the weight of the chick, approximate age, a couple feathers (for another project), and put a dab of colored sharpie on it’s breast. If the chicks were about four days or older they could move pretty quick! And they’re pretty hard to spot when they’re hunkered down, which they usually are. Like this: 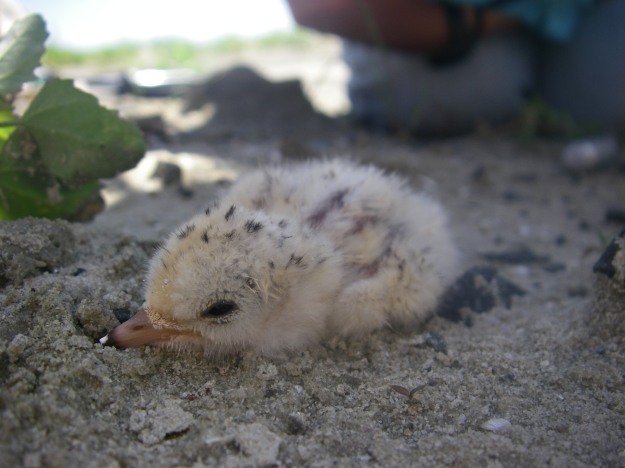 We also did some re-sighting of the chicks during the week. This just means that someone sits with a scope and tries to spot chicks that were previously banded. And this is where the plastic band and the sharpie come into play. Unfortunately the plastic bands aren’t too easy to read if the chick isn’t standing up, so the colored sharpie helps with identifying individual chicks.

Even though this week has been focused on the Terns, I’ve been meeting lots of new and wonderful people and seeing many new things for the first time. I’ve met people working with the University of Maryland, USGS, Maryland Environmental Service, Animal and Plant Health Inspection Service, other interns, and a couple of volunteers. It’s amazing to see how each person I’ve met absolutely loves what they do and I feel inspired by watching them work.

With that said, I leave you with a game. I am getting better at it with practice. . .find the eggs! 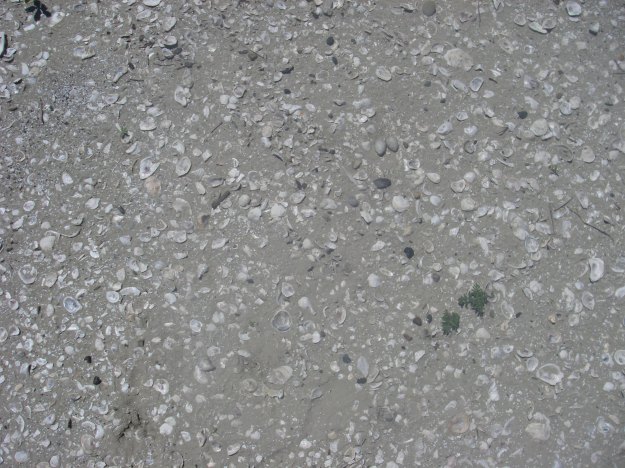 Follow Audrey on the rest of her journey this summer at her blog! >>