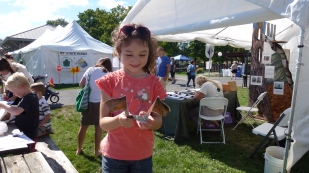 I’m Bethany Holbrook, and I work at our New York Field Office. You’ll be hearing from me every week! Stay tuned for tales from the great state of New York.

OK, so I’ve got a few words to share. Cut me some slack for our first Wordless Wednesday!

The Great New York State Fair kicked off last Thursday, and we had a crowd of excited fairgoers lined up to learn about bats at our booth!

We talked to visitors about the benefits that bats provide to our environment — and explained how detrimental it can be to kill bats, especially in the midst of the deadly bat epidemic known as white-nose syndrome.

White-nose syndrome is a fungal disease that has devastated bat populations in New York and other states. Bats with the disease exhibit uncharacteristic behavior during cold winter months, including flying outside in the day and clustering near the entrances of hibernacula. More than 5.7 million North American bats have died.

Most fairgoers were interested to learn how they could save bats, especially once they learned how many insects a bat will eat in one night – up to 300!  While parents learned how to construct bat boxes for their properties, children were busy creating a flying bat craft or exploring the inside of a bat hibernaculum exhibit.

The Great New York State Fair will continue through September 2, so venture out to Syracuse to share your crazy bat stories and get a taste of New York from a variety of vendors.

2 thoughts on “A Wordless Wednesday: Going batty at the New York fair!”