One little boy stood our our endangered species booth and held up a necklace made from elephant ivory. “This…this is NOT worth a life,” he said.

For Endangered Species Day in May, we continued our partnership with Zoo New England and spent an afternoon talking with more than 100 visitors to Boston’s Franklin Zoo about the animals that have been affected by the international crisis of wildlife trafficking, and we also shared with them ways to protect some of their local endangered species (threatened piping plovers and other shorebirds).

The event was led by Patty Levasseur, reptile and amphibian intern for Eastern Massachusetts National Wildlife Refuge Complex. She and refuge volunteers set up a booth with a nesting shorebird exhibit, a dress-up area for visitors that wanted to check out the life of a biologist or wildland firefighter, and a table of products made from wildlife and confiscated by our law enforcement. 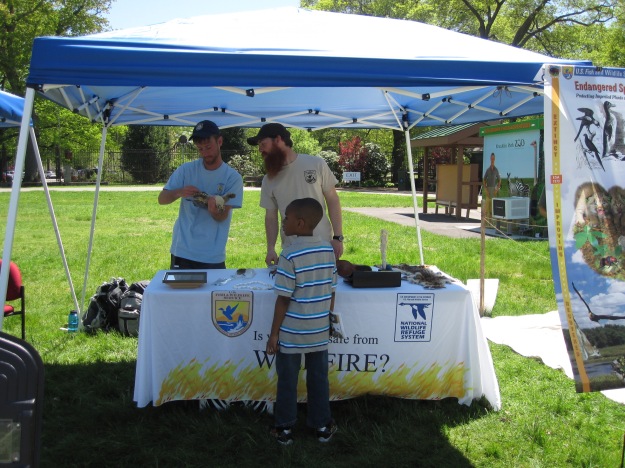 “At the confiscated wildlife products table, we talked about what each item was made from, and how that animal had to give its life to make that item,” Patty said. “We also explained how it is illegal to have these items and that some of them are made from endangered species that can be seen at the zoo.”

A roped-off area of sand with eggs and tern figures composed the shorebird exhibit.

“We talked about terns and how they are colonial nesters, so most visitors can see them and know when they have been disturbed because the whole colony will fly up in the air,” Patty said.

They showed images of the plovers to demonstrate how hard they are to see, and explained that flushing the birds off their nests could potentially kill their eggs or chicks.

“The closing and main point of our talk was to drive the importance of staying out of the fenced off areas–that even though you may not see any birds, they are most likely there, you just can’t see them (referring to the piping plovers), and that all these birds are protected by both or at least one of the state and federal endangered species laws,” she said. 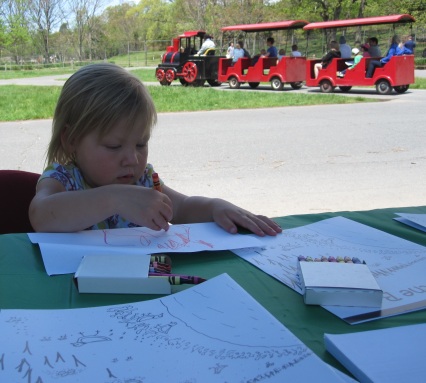 A little boy tries on the biologist shirt and binoculars at the Endangered Species Day event booth. Credit: USFWS

Visitors learn about the shorebirds that visit Massachusetts in the summer. Credit: USFWS 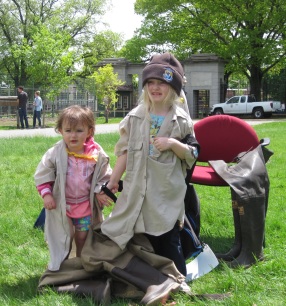 These two are ready to hit the beach and monitor some threatened piping plovers. Credit: USFWS

Eight-year old Jaime Heitkamp is ready to be a wildland firefighter! Credit: USFWS

Eleven-year old Kaela Heitkamp is ready to hit the swamp in the biologist shirt and waders! Credit: USFWS

“I think we touched more than a handful of the visitors that stopped by, especially with the nesting shorebirds,” Patty said. “I feel as though even if one person walked away with positive knowledge or even a change in perception, then it was a successful day.” 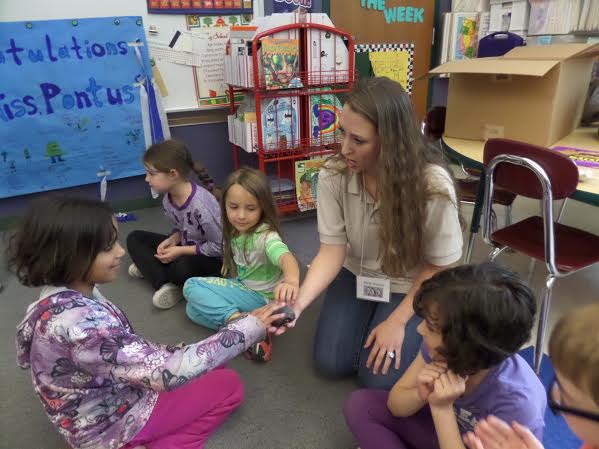 Biologists Kayla Easler (pictured) and Pamela Shellenberger of our Pennsylvania Field Office recently visited Park Forest Elementary School in State College to talk with the first-grade students about endangered species. “Kayla and I talked about what threatened, endangered and extinct mean and discussed federally listed species in Pennsylvania,” Pamela said. Students were able to see a threatened bog turtle that the office is permitted to use for education. The bog turtle was confiscated by law enforcement from a landowner that had removed it and kept it illegally in captivity for a couple years. Credit: USFWS