“Perfect is the enemy of good as the saying goes,” she says. “If you’re waiting for the perfect project, you’re going to miss the good ones.”

Naley has worked as a biologist for the U.S. Fish and Wildlife Service for more than three decades, spending time in California, Washington D.C, and Massachusetts. She currently works out of the Service’s Fishery Resource Office in Sunderland, Massachusetts, and continues to seek out projects that have just the right mix of benefits and partners. Habitat restoration has been the focus of Naley’s work throughout her career, and she’s always looking for opportunities that will benefit both the environment and the taxpayer.

Primarily as a result of the 1985 Farm Bill, Naley and Service colleagues recognized the long-term benefits of private land restoration (then not an agency priority) and helped develop the Service’s Partners for Fish and Wildlife Program nationwide. Today the program is the Service’s premier tool for conservation delivery on privately owned land. Naley says it is now commonplace for Service programs, including the National Wildlife Refuge System, to recognize, value and fund private land restoration .

Flood damage is a huge problem after storms like Hurricane Sandy. Many outdated culverts were built with the simple objective of draining water over time rather than the multiple objectives of moving flows, sediment (sand, gravel, boulders etc.), logs, branches, leaves and fish during high flows.

Installing larger culverts that can pass streams without persistent pinching and delays can dissipate stream energy and naturally transport sediment and river wood and keep our road crossings out of harm’s way. Naley says culverts that don’t clog reduce the risk of damage and the associated costs of repeated repairs and maintenance and they have greater potential to pass fish upstream and downstream.

Dams also present challenges, especially in fish passage. In Massachusetts alone, there are more than 80,000 dams more than three feet tall, which impede the ability of fish and other aquatic species to migrate. Naley says removing the dams and updating the overall infrastructure will help increase fish passage and reduce costs in the long run by eliminating safety hazards and increasing our quality of life.

Working through permit procedures that were designed to keep big yellow machines out of streams is often a costly barrier to dam removal, culvert replacement and stream restoration, but Hurricane Sandy funds have helped to reduce some of these challenges. By drawing attention to the benefits of building flood resilient communities and by providing some of the upfront cost, Sandy funds enable communities to get projects off the ground in ways they couldn’t before. The grants help towns replace culverts and remove dams and to realize long-term benefits that may not have been achievable due to constraints of short-term budget cycles. Sandy funds are building cost-effective solutions, Naley says, not “buying expensive Band-Aids.” 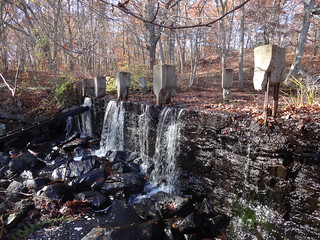 Martha Naley is leading the Shady Lea Mill Dam removal from the Mattatuxet River in Rhode Island, funded through Department of the Interior by the Disaster Relief Appropriations Act of 2013. Credit: U.S. Fish and Wildlife Service

“The Sandy funds make it possible for people to do the right thing – in terms of the environment and the economy,” Naley says.

Naley is currently involved in the $2 million Sandy-funded Shady Lea Dam Removal project in North Kingstown, Rhode Island. This project is still in its permitting and engineering phases, which according to Naley may take several months. But when the dam is removed, habitats for migratory fish such as the river herring and American eel will be restored.

She hopes people will begin to see projects like this, notice the long-term benefits and encourage their local boards and administrators to carry out similar work.

“It’s most rewarding to see the ripple effect,” Naley says. “You can start out small, and once you get the money and support, things can really take off.”

4 thoughts on “Opportunity After the Storm”

Brittany Bowker is a Hurricane Sandy youth story corps Student Conservation Association intern and a communications specialist for the Service’s Hurricane Sandy restoration work. She’s also a student at the University of Massachusetts Amherst, where she wrote for the Massachusetts Daily Collegian and worked with the undergrad television studio. You’ll be hearing from her often over the next few months, so keep an eye out for her work on the blog.