What is a “living shoreline?” An article recently posted in the Spring 2015 edition of Fish and Wildlife News and the Service’s Open Spaces Blog details how this natural method of shoreline protection is being used to support four Hurricane Sandy recovery projects led by the U.S. Fish and Wildlife Service. In the article, Brittany Bowker, a former Hurricane Sandy youth story corps Student Conservation Association (SCA) intern, provides an overview of the federally funded living shoreline projects making progress in New Jersey, Maryland and Virginia. 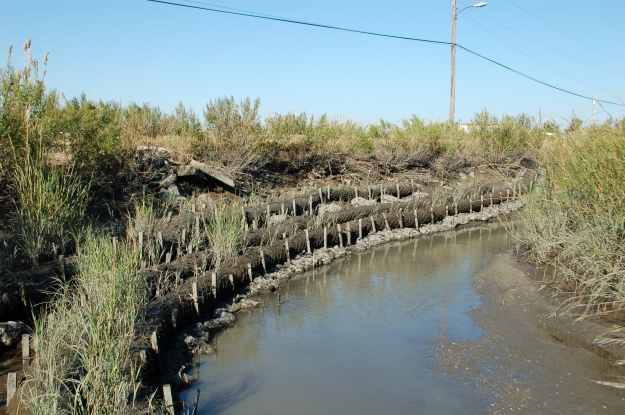 Coir logs, an example of a living shoreline technique using interwoven coconut fibers bound together with biodegradable netting, are set in place at Gandy’s Beach on the Jersey shore to provide temporary physical protection to a site while vegetation becomes established. Credit: Katie Conrad/USFWS

There was a time when shoreline protection often meant installing hard structures like bulkheads or riprap to armor the coast against erosion and rising sea levels. But starting in the early 1980s, a “softer” approach — called “living shorelines” — has been transforming the conservation of these important natural areas by allowing the coast to heal itself.

By using a variety of natural materials such as sand and marsh grasses combined with some structure, this method not only protects vulnerable coasts, but also maintains their ecological continuity and stability. Living shorelines have become a new and widely used method of shoreline protection, according to the Maryland Department of Natural Resources website.

3 thoughts on “A Natural Approach to Building a Stronger Coast”

Margie Brenner leads Northeast Region communications and outreach for Hurricane Sandy recovery, and is happy to share her passion for recycling on the Green Team. When not writing stories about coastal restoration, she likes to pick her own veggies from a local farm share, bike the Minuteman Trail into Boston, or hike in the woods with her "cavapoo" pup in tow.