Lee Halasz is a native of Australia and is a former conservation professional with the Queensland State Government. He and his family now reside in western Massachusetts, and he volunteered his time with us in 2015. This spring, we feature a series of bird stories Lee wrote to celebrate #birdyear.

Most of us have probably heard of and even seen a blue jay, and probably a bluebird, too. Perhaps some people know of indigo buntings – the males are almost entirely bright blue. But what about a cerulean warbler? The sky on a beautiful clear day is often described as cerulean blue. 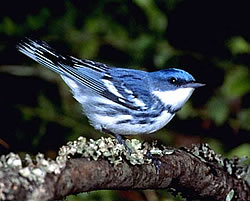 Well, it was just that sort of day in May two years, on an outing with my then three-year-old son, when I saw one.

The Right Place at the Right Time

We were doing a loop walk around the top of a local mountain. He did really well, though towards the end it was only snacking on salty carbohydrates that kept him going. As we were approaching the car, I heard a song that I instantly knew was different from the usual bird songs. It was a male cerulean warbler, singing with all his might.

Given my son was getting low on patience, I whipped out a lollipop, knowing it would give me a few minutes to enjoy the bird. Seeing it at such close quarters, and hearing it sing so loudly, really made my day (and the lollipop made my son’s!). It’s my one and only experience with a cerulean warbler.

It turns out that we were in exactly the sort of habitat that cerulean warblers like: ridge-tops and steep upper slopes, dominated by large oak trees, facing south, in large patches of forest. Sometimes finding wildlife is just about looking (or being) in the right place.

However, there is another ‘right’ place for cerulean warblers, and that is in the northern parts of South America. In fact, they spend just a few months in eastern North America, and most of their time in countries including Venezuela, Colombia and Ecuador. Twice a year they also spend a few weeks in migration traveling between the two areas.Unfortunately in the last half century, populations of cerulean warblers have declined by more than half. However, much can and is being done to address this decline. The Cerulean Warbler Technical Group has shown that targeted forest management in the United States can increase breeding populations, and they have published guidelines for forest managers. There is now a Cerulean Warbler Conservation Reserve in Colombia, and landowners around it are being supported to make the surrounding area desirable for the species.

How You Can Help

Something very tangible anyone can do is to purchase ‘bird-friendly’ shade grown coffee (produced under canopy trees), rather than ‘conventional’ coffee grown in open fields.

Is the average person ever likely to see a cerulean warbler? Probably not. But imagine if you were out walking, enjoying a beautiful blue sky spring day, and just happened to see one of these tiny birds?

I hope my son can see one again during his lifetime, if he wants to, when he can take in the whole experience, perhaps without a lollipop!

Tanya Lama is a pathways biological intern in the Northeast Region working on spanish-language communications and outreach. She pursues a doctoral degree in conservation genomics at UMass Amherst, and enjoys biking, swimming and gardening.