Every spring, small worm-like larvae emerge from eggs in shallow riffle areas of brooks and rivers, where they are carried downstream by the current until they reach a point of repose on the bottom, and all but disappear. For four years, they are concealed in the mud, blindly feeding on microscopic plants and animals, sightless and unseen.

Then in just a matter of weeks, a horrifying metamorphosis takes place. The larvae develop eyes and a suction-cup like mouth, lined with concentric rings of jagged teeth, encircling a file-like tongue. If you’ve seen Return of the Jedi, the Great Pit of Carkoon may come to mind. If you haven’t, Google “sarlacc”. Also, really? Drop everything and watch Return of the Jedi. Now. 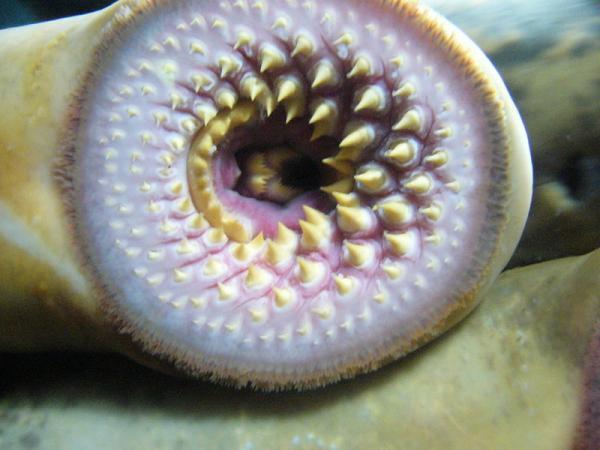 What lies beneath: After four years living on stream bottoms, sea lamprey transform into blood-sucking parasites in search of aquatic hosts like salmon. But what scares fish biologists working in the Lake Champlain basin is the scale of the sea-lamprey population in the system, not the creature’s gruesome face. Credit: FWS.

It’s the stuff of science fiction, but the vile mouth described above doesn’t belong to an imaginary creature from the fictional planet of Tatooine. It belongs to sea lamprey — parasitic, eel-like fishes that at this moment are emigrating from natal streams in Vermont and New York into Lake Champlain (on planet Earth) in search of an aquatic host. Anything with gills and a heartbeat will do.

When sea lamprey zero in on a target like salmon, “They use that suction-cup mouth to stick to its body, and scrape a hole through its flesh with their tongue,” explained Steve Smith, a Fish Biologist at the U.S. Fish and Wildlife Service Lake Champlain Fish and Wildlife Conservation Office.

“Then, they start sucking out its body fluids,” he said. “Whatever they can get.” Blood, bile, serum, pericardial fluid, you name it.

“In the time they spend in the lake as parasites — which is only about 12 to 18 months — a single lamprey can kill what amounts to 40 lbs of fish.”

The loss of fluids essential for temperature regulation, nutrient transport, digestion, and more, can mean death for a relatively small fish like a walleye or a juvenile salmon. But even a fish with enough heft to withstand multiple lamprey hits may eventually succumb to infection from a resulting wound.

Even if a sea-lamprey hit doesn’t kill a fish immediately, the open wound left behind can become infected, leading to secondary mortality. Credit: FWS

For anyone who sleeps with the lights on after watching a scary movie, it’s a nightmare-inducing scenario. But for a fish biologist, it’s not the parasitism that’s scary; it’s the proportion.

While there is debate as to whether sea lamprey are native to Lake Champlain, or were introduced when the Champlain Canal was built in the 1800s, “Whether they have been here for 10,000 years or not, they are out-scaled for this system,” said Smith.

In some systems, they not only fit the scale, but play an important role in keeping a balance, said Fish Passage Coordinator Madeleine Lyttle. In the Connecticut River basin, adult sea lamprey swim upriver from the Atlantic Ocean to spawn, juveniles head out into the ocean in search of hosts after their metamorphosis, and both forms make valuable ecological contributions by enriching the sediment on the river bottom and providing food for other organisms.

The difference? The sea. “Here, they are landlocked, so Lake Champlain is their ocean,” she explained. “It’s just not a very large area to be feeding from.”

In other words, the other fish that inhabit Lake Champlain have no place to hide. So when efforts to restore native fisheries through coordinated restocking efforts got underway in the 1970s, the young fish became fodder for a sea-lamprey population explosion.

In 1990, the Lake Champlain Fish and Wildlife Collaborative struck back, launching a pilot program to see if they could control the sea lamprey population with temporary barriers designed to keep adults from migrating upstream to spawn, and pesticides designed to kill larval lamprey in natal streams before the dreaded metamorphosis occurred. The results were promising. The wounding rate for lake trout dropped from about 100 wounds for every 100 fish to about 30.

But when the experimental program ended in 1998, lamprey numbers skyrocketed, as did salmon and lake trout mortality. “We saw wounding rates on lake trout back at 100 percent,” said Smith.

Fresh wound from a sea lamprey

It wasn’t just that the lampricide treatments were suspended while the Service completed an in-depth Environmental Impact Statement for the program in accordance with the National Environmental Policy Act (NEPA), it was that the problem had been more extensive than they realized all along. It turns out that unlike salmon, which return to the streams from whence they came to spawn, sea lamprey don’t have a so-called natal bias. When it’s time to spawn, they make their way to the closest stream that smells like larval lamprey.

“For years, the control efforts had targeted areas where lamprey were known to spawn,” said Lyttle. “We thought we were getting a handle on them, but they just went somewhere else.”

So the sea-lamprey team took stock, and laid out a strategic plan for an extensive, integrated, science-based, long-term control program for the Lake Champlain basin.

“They really upped the game,” said Lyttle. Today the Lake Champlain Sea Lamprey Control Program involves a five-step process designed to evaluate and manage sea lamprey from natal stream to grave. Wounding rates are down from about 100 wounds per 100 fish to about 30 for lake trout, and 20 for salmon.

With numbers approaching a level that is proportional to the rest of the system, the sea lamprey problem is starting to seem manageable, and the creatures themselves a little less horrifying.

“They are actually pretty amazing, even just in the fact that they are such an ancient species,” said Lyttle. Sea lamprey have been found in fossil records dating to the Pennsylvanian period. For non-geologists, that pre-dates Jurassic, the park and the period.

“They may sound nasty, but anything is when it’s out of control,” said Lyttle. Like cell division, or zombies.

“Things are much better now that everything is recovering,” she said, pointing out that a range of different species are benefiting from the lamprey control program, from salmon to lake trout to walleye to lake sturgeon, a state-listed endangered species in New York.

The lamprey program, along with complementary and integrated programs in research and assessment, stocking, fish passage restoration, and restoration of wetland and riparian habitats by the Service’s Lake Champlain Fish and Wildlife Conservation Office and their partners are allowing these species to come back.

1 thought on “Invasion of the body fluid snatchers”