As the supervisory biologist at Chincoteague National Wildlife Refuge, Kevin Holcomb is responsible for implementing management strategies to counter the impacts of climate change and sea-level rise. Seeing the positive outcomes that these practices have on both the wildlife and the opportunities it provides for public engagement fulfills the Service’s mission and rewards Holcomb. Credit: Steve Droter

After getting a degree in geography, Amy Ferguson served in the military for five years before attending graduate school at the University of Virginia. The partnership with The Nature Conservancy, Virginia Marine Resources Commission and USFWS allowed Ferguson to research and explore different management practices like building oyster reefs to create a more resilient coastline. “If you can enable natural processes to take care of themselves, that’s always ideal over hardened structures,” says Ferguson.

What makes a “living shoreline” come alive is not just the live oysters that create the foundation, but the ecosystem that it can support. The oysters provide food and habitat for shorebirds and aquatic species. Since the reef is organic, it is able to move and adapt to the predicted changes of climate change and sea-level rise. Credit: Steve Droter 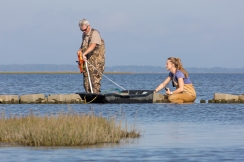 These cement “castles” are acting as a substrate for oysters to cling onto and form reefs. As the oysters grow and begin to build up, a natural reef will occur creating a “living shoreline.” Holcomb, pictured here with Amy Ferguson, a University of Virginia graduate student, explains that as waves from storm events go over the reef they will attenuate, or become less intense – saving the coastal salt marshes from damage. Credit: Steve Droter 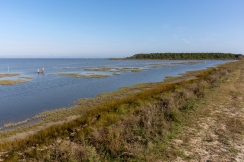 Chincoteague NWR is one of the most visited refuges in the country with more than 1.2 million visitors each year. “Most of them go to the beach and tour the refuge,” says Holcomb. “The sites were selected to provide visitors the opportunity to view the oyster castles up close and watch them evolve into living reefs. When visitors and volunteers can get close, help build, and understand this shoreline management technique, they are more likely to create similar shorelines on their personal properties as well.” Credit: Steve Droter

An osprey, also known as a “fish hawk,” perches above a snowy egret along Beach Access Road, directly across from Tom’s Cove visitor center. This bird of prey poses no threat to federally threatened and protected least tern and piping plover. The refuge provides excellent feeding and loafing areas for migratory waterfowl and shorebirds. Credit: Steve Droter

Chincoteague NWR has over 17 miles of beach along the Virginia side of Assateague Island. The barrier island spans both Virginia and Maryland and is owned and managed by multiple government agencies, including USFWS, NPS, and the State of Maryland. The diverse habitats are protected from development but provide recreational opportunities that attract visitors from all over the world. Credit: Steve Droter

“You don’t see crowded boardwalks or high-rise hotels. It’s a wonderful beach experience,” says Holcomb. “It’s a very remote and natural feel. You can walk for miles and not see another person at some times of the year. It’s nice to get that solitude sometimes.” Credit: Steve Droter

A popular attraction that has brought recognition to both the refuge and town are the Chincoteague ponies. It’s easy for visitors to view the ponies and an array of wildlife at the refuge. The 150 ponies located on the Virginia side of Assateague Island are actually managed by the local Volunteer Fire Company and graze through the refuge because of a special use permit. Credit: Steve Droter

“It’s been great to see the different organizations cooperating, the government, the nonprofit, and the academic institutions all coming together to work on a similar project with a great goal in mind,” says Ferguson. “[I also] love the waders and the mud.” Credit: Steve Droter

More frequent storms surges have continued to sculpt habitat and public access along the Virginia coastline. At Chincoteague National Wildlife Refuge — one of the country’s most visited refuges — supervisory biologist Kevin Holcomb is using oysters to face the challenges of sea-level rise and climate change.

This past spring, Holcomb and partners installed a living shoreline totaling over 3,650 linear feet of oyster reef at the refuge. The oyster reef protects the refuge’s shoreline and access roads by slowing down the speed and intensity of incoming waves. Amy Ferguson, a graduate student from the University of Virginia, is measuring this slowing down process — called attenuation — as part of a partnership with The Nature Conservancy.

“Anything that can help nature help itself — like artificial oyster reefs or marsh enhancements — I think is a great thing to consider when looking at shoreline protection methods,” says Ferguson.

What makes a shoreline come alive? Coasts are often protected by grey, hardened infrastructure such as bulkheads and sea walls that don’t provide habitat for estuarine wildlife and can lead to even more damage to the ecosystem over time. In contrast, a living shoreline such as an oyster reef creates habitat and buffers wave energy — instead of the wave hitting a wall at full force, its energy is dampened by the breakwater reef.

The oyster castle blocks act as substrate for oyster spat to cling on to. The blocks are stacked so that as oyster colonies grow, they increase in size until a reef forms. It takes around three years for the reef to form, but Holcomb says that the benefits can last decades — benefits such as filtration of nutrients and water, food for shorebirds and biodiversity.

These oyster reefs will enhance Chincoteauge’s rich coastal environment and natural treasures. And the refuge’s popularity with visitors — whether for wildlife observation, nature photography, hunting or fishing — is also a valuable asset for the local community. A 2006 economic study by the USFWS estimates that tourism from the refuge contributes $315 million in annual spending and 3,766 jobs.

“Chincoteague has a wonderful array of wildlife for easy observation by the public,” says Holcomb. “Our visitors come to see the birds, beach and the Chincoteague ponies which make the refuge and the town famous.”

When Hurricane Sandy made landfall four years ago in October 2012, most of the damage to the refuge was downed trees and road washouts, which threatened tourism areas. To prepare for the next big storm event, refuge managers and biologists like Holcomb wanted to use natural methods like a living shoreline. Chincoteague NWR received more than $500,000 in federal funding from the Hurricane Sandy Disaster Relief Act to work with their partners to enhance, restore, and build a more resilient natural defense system to make their community #StrongerAfterSandy.

This is the third in a five part series of photo slideshows highlighting the people who have been working to defend their coastal ecosystems against storms in the wake of Hurricane Sandy. In previous weeks we have looked at Matt Whitbeck and Miles Simmons, combating climate change in the Chesapeake Bay and Julie Devers, assessing fish barriers and culverts in Maryland.  You can view the continuation of this series and other news regarding our restoration and recovery projects on our website.

3 thoughts on “People Behind a Stronger Coast: Kevin Holcomb and Amy Ferguson”

Patricia Murphy is a Student Conservation Association intern focusing on Hurricane Sandy recovery and restoration communication. When she is not drinking coffee, playing with her two pet lizards, or working, she studies natural resource conservation and journalism at UMass Amherst.