As the national lead biologist for the recovery of the threatened red knot, and the Service’s state lead (N.J.) for threatened piping plover, Wendy Walsh thinks a lot about managing the impact people can have on the habitat these species depend upon: sandy beaches and tidal inlets. 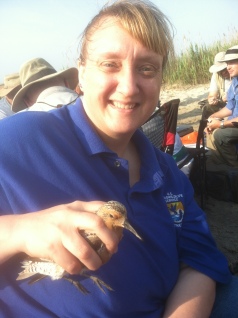 A new inventory of modifications to beach and tidal inlet habitat from Maine to Virginia has given Wendy Walsh — the Service’s lead biologist for the recovery of the threatened red knot — new perspective on habitat availability for shorebirds. Credit: FWS

During Hurricane Sandy, barrier beaches overwashed around Little Egg Inlet, an opening into Great Bay in the wilderness portion of  Edwin B. Forsythe National Wildlife Refuge. And that turned out to be a good thing for plover. “It created great habitat,” Walsh said. “Plover numbers really increased.”

Today, Walsh said, “Beaches around Little Egg Inlet provide habitat for about a third of the plover population in New Jersey, as well as habitat for concentrations of migrating red knots, and for the threatened plant seabeach amaranth.”

But now proposed activities in and around the inlet threaten to interfere with the natural processes that are necessary to maintain this habitat complex. “There has been drift of sand from nearby beach fill, and a plan to dredge the inlet,” Walsh explained.  It’s not yet clear how these activities may affect the habitat.

In the face of these threats, an inventory of beach and tidal inlet habitat compiled by coastal geologist Tracy Rice has provided valuable perspective to help make the case for careful management around this inlet. Although Little Egg Inlet was previously considered important plover habitat in New Jersey, the inventory revealed something new:

“Little Egg Inlet is one of only two unmodified inlets between Montauk, N.Y., and Chincoteague, Va., a shoreline distance of nearly 350 miles,” said Walsh. “That means that nearly all other inlets along that entire stretch of coastline have been stabilized, dredged, sand mined, or altered in some way.” 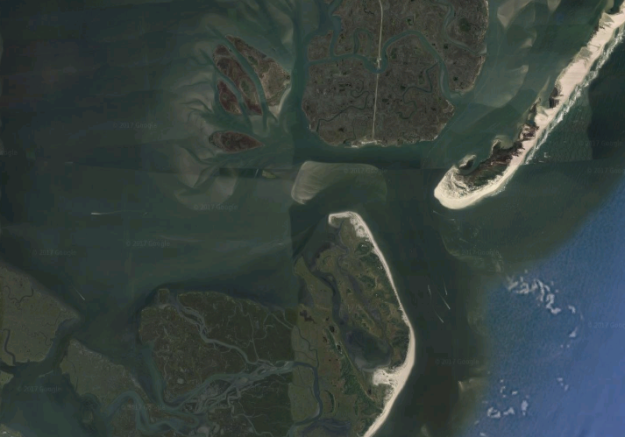 Developed using imagery from states, private organizations, and Google Earth, the habitat inventory revealed that Little Egg Inlet in New Jersey is one of just two unmodified tidal inlets in a 350-mile stretch of coastline within the breeding range of piping plover and red knot. Credit: Google Earth

It seems Little Egg Inlet is an even rarer natural asset than anybody realized, and that’s important to know given the Service’s emphasis on prioritizing habitats that are considered to be of high value to at-risk species.

All three of Forsythe’s listed beach-dependent species thrive in the shifting habitats that surround the natural inlet. “We knew these species favor these kinds of inlet sites, and we knew most of them were altered, but we didn’t know it was all but two,” said Walsh. “The data provided a landscape perspective that enabled us to say Little Egg Inlet is unique, at least in the Mid-Atlantic,” she said.

“It just took someone adding it all up.”

That someone was Rice, with support from the North Atlantic Landscape Conservation Cooperative (LCC). Before she could even begin tallying all of the beach armoring structures (seawalls, revetments, giant sandbags) and inlet modifications (structures, dredging, mining for fill, opened artificially, closed artificially, or relocated) in the region, she had to find all of the things she needed to count.

Rice described the process as similar to assembling a puzzle with scattered pieces. She began by reviewing the literature, including maps dating to the 17th century, for any and all pre-existing data, then completed the picture with imagery from Google Earth, Google Maps, state agencies, municipalities, and private organizations.

The completed inventory provides a comprehensive look at the location, status, and condition of potential piping plover breeding grounds from Maine to Virginia in three periods: before Hurricane Sandy, immediately after Hurricane Sandy, and three years after post-storm recovery efforts.

The inventory encompasses a suite of products — including habitat assessment reports, Google Earth data layers, Microsoft Excel databases, and Data Basin shapefiles — that are available for anyone to download on the North Atlantic LCC’s Beach and Tidal Habitat Inventories product page. 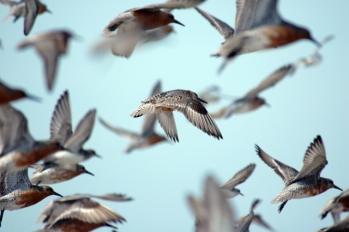 The products dovetail with Rice’s previous work to inventory coastal habitat in the Southeastern portion of the U.S. Collectively, these resources provide a comprehensive view of the red knot’s coastal habitat, and Walsh is already considering using the information in an upcoming project to develop a recovery plan for red knot.

“The recovery outline will give us perspective to think about future habitat availability, how much of that is managed, and how much is undisturbed,” she said.