Today we hear from Elizabeth Rogers, with the National Park Service at Fire Island National Seashore in New York State. Elizabeth spent some time this spring and summer working as a Public Affairs Specialist with the U.S. Fish and Wildlife Service, sharing the stories and science of resilient coastal communities and systems. On her days off, she can be found exploring the outdoors or dabbling in the kitchen.

Millions of people come to beaches along the Atlantic Coast every summer to swim, stroll, and sunbathe. Piping plovers, federally protected beach-nesting birds, return to sandy stretches from Newfoundland to North Carolina each year to look for love.

When it comes to finding the right place to nest and raise their young, piping plovers are picky. Nests are often found along the upper beach in sparsely vegetated areas of sand, pebbles, or shells above the high tide line. 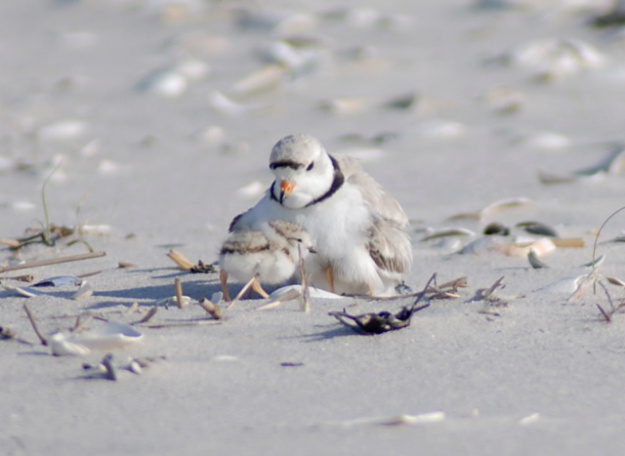 Ideal nesting habitat has long been identified and protected with string fencing at federal, state, and local parks across the Northeast. Until recently, however, there was little information to help land managers understand the importance of local nesting habitat within the broader range of this species.

Two studies funded through Hurricane Sandy relief aid are helping to change that.

Since Hurricane Sandy struck, researchers from Virginia Tech have banded and monitored piping plovers near a channel, or breach, that opened during the storm within Fire Island National Seashore’s wilderness area in New York. The study shows that natural, unmodified channels like this breach are a big deal for breeding plovers. Annual surveys have shown that the breach shoreline and nearby overwashes and flood shoal islands are attracting new piping plover pairs.

Due to the dynamic nature of sandy coastal environments, there is an abundance of flat, open habitat with little vegetation. An ample supply of potential nest sites and edible insects make the shoreline near the natural inlet a draw for an increasing number of piping plovers.

When Hurricane Sandy struck in 2012, it opened a channel in the wilderness area at Fire Island National Seashore, seen near the top of this photo. Credit: NPS

Since the storm, researchers from Virginia Tech have been banding and monitoring piping plovers near the channel. Credit: NPS

Over the course of the five-year Virginia Tech study, more than half of the adult birds have returned to the site year after year. One adult flew over 30 miles from its nesting site to feed near the breach and was observed the following year nesting at the wilderness breach. This year, two adult plovers banded as chicks from different nests have returned and paired up —  a true summer love story.

An inventory compiled for the North Atlantic Landscape Conservation Cooperative (NALCC) by coastal geologist Tracy Rice identified piping plover habitat on a regional scale during three distinct time periods: before Hurricane Sandy in 2012, and after the storm in 2013 and 2015. The Fish and Wildlife Service is a supporting partner in the NALCC.

The inventory shows how sands — and potential nesting habitat like natural tidal inlets — have shifted over time across the Atlantic Coast. With a broader view of breeding grounds, the location of prime piping plover habitat and the impacts of habitat modification come into clearer focus.

Little Egg Inlet on Edwin B. Forsythe National Wildlife Refuge in New Jersey is one of just two unmodified tidal inlets in a 350-mile stretch of coastline within the breeding range of the piping plover. Credit: Google Earth

Rice’s inventory found the wilderness breach at Fire Island and Little Egg Inlet, an opening into Great Bay in the wilderness portion of Edwin B. Forsythe National Wildlife Refuge in New Jersey, are the only natural, unmodified channels in a 350-mile stretch of coast from Montauk, New York, to Chincoteague, Virginia. Beaches near natural inlets, shaped and reshaped by the tides, can provide an abundant supply of nesting habitat and food resources for shorebirds. Identifying these natural assets on a regional scale provides land managers an important perspective.

Taken together, these studies deepen our understanding of how landscape change within a species’ range can influence breeding success. This new information will guide how shorebird nest sites are protected in the future. Good news for piping plovers looking for love along the Atlantic Coast.