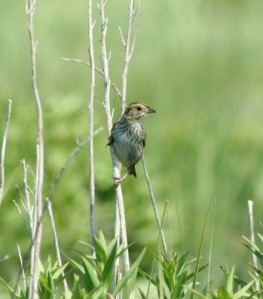 Picture, if you will, a coastal marsh in New England where closely related sparrow species — the Saltmarsh Sparrow and Nelson’s Sparrow— interbreed where their ranges overlap. The birds produce hybrid offspring that can backcross with either parent species, until a large percentage of mixed-species birds forms in the area.

Beyond TV science fiction, Kate O’ Brien, a biologist with the U.S. Fish and Wildlife Service’s Rachel Carson National Wildlife Refuge, has helped author a recent study of hybrid zones with lead author Jennifer Walsh and Adrienne Kovach of the University of New Hampshire, Gregory Shriver of the University of Delaware, and Brian Olsen of the University of Maine. The five are members of the Saltmarsh Habitat & Avian Research Program, a collaboration of academic, government, and nonprofit researchers focused on the conservation of tidal marsh birds.

“Even given the significant challenges the Saltmarsh Sparrow faces, it is a fortunate species to be the focus of numerous talented researchers in the SHARP community,” O’Brien says. “It is a species that has gone from relative obscurity to one of intense focus.  Only by learning more about the species will we be able to monitor, manage and conserve it.”

O’Brien and the other researchers found that appearance alone is not enough to identify these hybrid zone birds, and that birds from further backcrossed generations were often indistinguishable from the parent species. Fifty percent of birds identified as pure Saltmarsh or Nelson’s Sparrows in the field turned out be the descendants of hybrids when their DNA was analyzed.

They examined birds in the hybrid zone on the coast of Maine, New Hampshire, and Massachusetts. Each bird was classified based on its appearance as a Saltmarsh Sparrow, Nelson’s Sparrow, or a hybrid, and then a blood sample was taken so that the accuracy of this identification could be confirmed with DNA.  The genetic data was compared with data the researchers collected on plumage, bill size, and body size to determine if physical traits could be used to predict genetic species and hybrids. While the physical traits could not distinguish pure species from hybrids, they could reliably separate birds with primarily Saltmarsh Sparrow gene pools from those with primarily Nelson’s Sparrow gene pools.

These findings have important implications given the restricted range of the Saltmarsh Sparrow. Currently about 150 miles (or 15 percent) of the range falls within the hybrid zone, where both species occur, while mixed individuals occur well beyond the boundaries of this zone. Since individuals thought to be either “pure” Saltmarsh or “pure” Nelson’s may frequently carry hybrid genes, the researchers suggested DNA identification may be required to ensure accurate monitoring of the degree of hybridization and the population status of Saltmarsh and Nelson’s Sparrows within this area. The jury is still out, however, on the significance of hybridization — particularly when it comes to adapting to climate change.  Some scientists theorize that novel gene combinations may result in increased adaptation and increased resilience to climate change, while others suggest they could result in decreased survival of hybrids. Only time — and future research — will tell.

Learn more about this research here.

When we think of river life, for many of us a handful of animals may come to mind – trout, smallmouth bass, muskie. But in the Southern Appalachians, waters of the Upper Tennessee River Basin are alive with a whopping 255 species of fish and mussels.

Despite this incredible diversity of stream life, contaminants affecting water quality, low population size and habitat fragmentation have combined to threaten many species. Twelve of the 172 fish species known from the basin are on the federal endangered and threatened species list, as are 24 of the 83 known mussel species. Those numbers add to 36 threatened or endangered animals across a river basin covering an area about the size of West Virginia.

For years, the U.S. Fish and Wildlife Service and its partners have worked cooperatively to recover these rare animals, employing a variety of strategies. In looking at how best to move forward, the Service decided to consider where and how it could use its limited resources to have the greatest impact on these rare animals. The result is the Imperiled Aquatic Species Conservation Strategy for the Upper Tennessee River Basin – a flexible tool to help Service biologists and managers decide where to focus their efforts and identify opportunities in coordination with partners.

Searching for mussels in the South Toe River. Photo by Gary Peeples/USFWS

To imagine how this might work, consider the collection of globally rare freshwater mussels that are found in the rivers of the basin. Mussels help filter and clean river water, which make them important to people. Unfortunately, there are many stretches of river where mussels survive in very low numbers. In some areas, mussels are nonexistent due to past water quality problems that may have since been corrected.

By focusing partner resources and collaborating on mussel propagation and augmentation programs, says Brad Kreps, Director of The Nature Conservancy’s Clinch Valley Program, partners can restore and expand mussel populations across the river system. They also can continue to address water quality problems and habitat issues wherever concerns still exist.

Roberta Hylton of the Service’s Southwestern Virginia Field Office, part of a team of FWS scientists and managers who developed the strategy, says all of this adds up to a healthier and more sustainable resource for wildlife and people in the basin.

“People do not live apart from the Upper Tennessee River Basin ecosystem; they are connected to it,” Hylton says. “Working to conserve aquatic biodiversity means we will also be working to protect water quality and the interests of citizens.”

Memorial Day weekend is the gateway to summer — when long, warm days call us outdoors to appreciate the wonders of nature through hunting, fishing, hiking, and dozens of other recreational pursuits. But more importantly, it is a time for remembering the contributions of our nation’s veterans and the sacrifices they’ve made to protect our country. Throughout the Northeast Region, many U.S. Fish and Wildlife Service field stations provide special opportunities to connect veterans with nature as a way to honor their public service. Here are a couple of examples.

Since its start in 1992, the Veterans Fishing Program at Cronin National Salmon station in Sunderland, Mass. has served more than 5,000 wounded veterans. The program, run in partnership with the Department of Veteran’s Affairs and the Soldiers Home of Holyoke, provides an opportunity for wounded veterans to socialize, enjoy the outdoors and learn about fishing.

Retired hatchery manager and Vietnam veteran Micky Novak developed the program as a way to give back to the community and make connections with local veterans. Once a month, veterans come to the hatchery to fish in the pond stocked with trout from federal and state run hatcheries. The program also has attracted local veterans who volunteer at the events, helping participants fish and lending a friendly ear and smile.

At Patuxent Research Refuge in Laurel, Md., veterans participate in the “Wounded Warrior” turkey hunt, which the refuge has hosted for nearly a decade. During this year’s hunt on May 7, volunteers from the National Wild Turkey Foundation and Meade Natural Heritage Association helped support the hunt on the refuge’s North Tract — and helped four out of five hunters harvest a turkey. Afterward, the veterans were treated to lunch donated by a local vendor.

“The veterans who participate in the hunt are very happy to have the opportunity — it doesn’t matter whether they are successful or not,” said Refuge Manager Brad Knudsen. “This year was one of the most successful hunts we’ve had, but they are just glad to be back in the woods getting connected — or reconnected — to the outdoors.”

This weekend we honor and remember those who gave the ultimate sacrifice for their country and all those who have served and continue to serve to protect the nature of America.