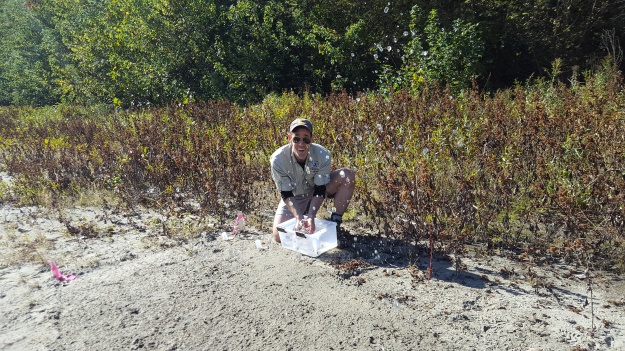 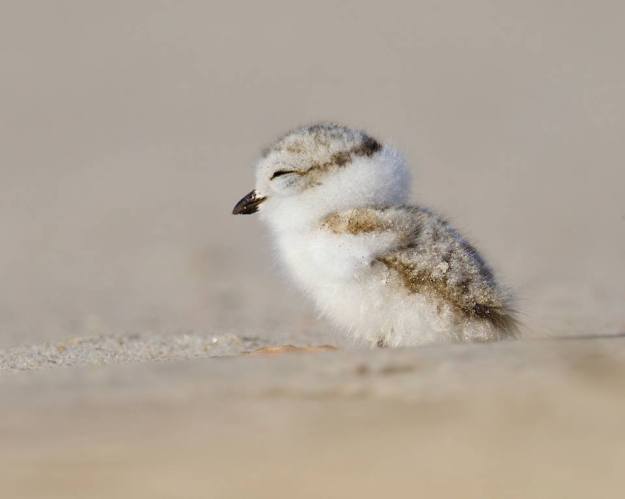 Did you know that this year marks 30 years since the piping plover was protected under the Endangered Species Act? Things didn’t look so good for this little shorebird back then. Thanks to decades of dedicated conservation efforts, the plover has more than doubled its population along the Atlantic Coast. If you’re headed to the beach this summer, find out how you can help us reach recovery!

(This story comes to us from The Sandpaper)

The overwash areas of Holgate have been very good to piping plovers this year and to other beach nesting birds, including least terns and American oystercatchers.

“If there is one thing to take away from our conversation is that Hurricane Sandy was not a bad thing for plovers,” said Paul Castelli, lead wildlife biologist at the Edwin B. Forsythe National Wildlife Refuge, which owns and manages the wilderness areas of Holgate and Little Beach in Little Egg Inlet.

Beach-nesting birds prefer areas that are sparsely vegetated and flat so they can better see predators approaching and their fledglings can negotiate their way to the surf for their first meals of organisms living in the surf zone.

What Superstorm Sandy did in October 2012 was send a series of waves right over much of the Holgate wilderness area, flattening dunes and killing vegetation. It was a loss for some nesting birds, but a boon for beach nesters.

So far this year, volunteers and scientists have counted 77 piping plovers on Holgate and Little Beach –mostly on Holgate – and 55 piping plover nests that have fledged over 30 chicks. In addition there have been 51 American oystercatcher nests and 427 adult least terns with 155 chicks.


“It’s been very busy down there,” said Castelli. “These are the largest numbers of beach-nesting birds we’ve ever seen, or at least in recent years. It’s a combination of over-wash areas (for nesting) and good habitat management and protection.”

Castelli said last year was also a good year contributing to plover numbers, but the species is still considered in decline in New Jersey and is on both the federal and state endangered list and needing protection. In 2015, there were 24 nesting pairs, double the number that nested in 2014. Now it has doubled again. [EDITORIAL NOTE: The population doubled following Hurricane Sandy from 12 to 24 pairs last year. The 2016 population remained high at 25 pairs!]

Least terns are also on both lists, and the American Oystercatcher is a species of concern in New Jersey. Foxes and raccoons are the worse predators of nests, but those have been kept under control, and the practice of enclosing nests to keep predators out while allowing birds in and out has been carried out by volunteers.

“Mostly it’s the sheer numbers of people that we need to protect them from,” said Castelli. “I know it’s controversial to close beaches to people, but it really pays off, especially in years like this.”

This year, Jonathan Cohen and an intern Michelle Stantial from the State University of New York, Syracuse, College of Environmental Sciences and Forestry, have been banding the birds.

“This makes it easier to better calculate which birds are successful at breeding, which birds are re-nesting and which birds are leaving to go to Cape May or somewhere else to nest. It’s a big deal to get a handle on the behavior of an endangered species,” said Castelli. “Banding is only done by individuals that are trained and have a high level of competency,” he added.

Plovers and other shorebirds are just starting to migrate south, a process that goes on for about two months. Ones that are landing to rest and fuel up at Holgate today may have come from as far away as Canada’s shores.

The Edwin B. Forsythe Wildlife Management Area is run under the auspices of the U.S. Fish and Wildlife Service. This year the service joined with the nonprofit Conserve Wildlife Foundation of New Jersey and its state coordinator and manager for the beach nesting birds project, Todd Pover.

According to Pover, piping plovers have very strong site fidelity, so adults tend to come back to the same site year after year, often to the same patch of beach. The young will return to the same patch of beach but have to lay claim to their own territory as existing pairs fight for theirs. This territorial fight may be why a single nesting pair of plovers has staked a claim on the tip of Island Beach State Park, closing that area to fishermen through the summer.

Pover hires seasonal workers to inform tourists on why the Holgate Wilderness Area is closed during the summer and the importance of the wilderness beach to beach-nesting birds. The Holgate Wilderness Area can be visited when volunteers are there for one-hour guided walks that start at the Holgate bulkhead. Be prepared for walking, wear appropriate clothing, and bring water, sunscreen and insect repellent. Loaner binoculars and pamphlets are provided.

Lee Halasz is a native of Australia and is a former conservation professional with the Queensland State Government. He and his family now reside in western Massachusetts, and he volunteered his time with us in 2015. This spring, we feature a series of bird stories Lee wrote to celebrate #birdyear.

Will you be at the beach this summer? Keep an eye out for breeding shorebirds.

The beach is a fantastic place to be. All year round it is a fun and inspiring element of our landscape, and part of that enjoyment comes from being around distinctive coastal birds.

Most of us only go the beach in summer, when we can enjoy the weather and water to relax and have fun. Summer is also an important time for many shorebirds; it is when they come to Northeast beaches to breed.

The beach is a thin strip of naturally precarious habitat in a dynamic environment. It is subject to the power of waves and wind, and extremes of temperature. Despite these challenges, this is where beach-nesting shorebirds have successfully bred through time.

The increased use of beaches by humans has introduced a new variable. The Northeast becomes home to more people every year, and over time society has become more affluent and gained greater freedom to enjoy coastal areas. These patterns have resulted in greater impacts on coastal environments and coastal wildlife, and consequently we need to take actions to ensure that beaches remain a safe place for shorebirds.

Beachgoers can drastically reduce the breeding success of beach-nesting shorebirds. The eggs and chicks are well camouflaged and can unknowingly be crushed by people walking above the high tide line. Also, if adults are flushed from the nest, chicks and eggs can suffer heat stress without the protective shading offered by the parents, and unattended eggs and chicks can be destroyed and eaten by predators.

There are some great shorebird recovery success stories. In Massachusetts, targeted actions have seen piping plover populations bounce back dramatically in recent decades, and American oystercatcher populations are recovering impressively since returning to the Northeast in the last half century.

Some of this success is attributable to programs like the Atlantic Flyway Shorebird Initiative that increase the focus on shorebird conservation. For example, many of the contributing partners organize summer beach stewards who raise awareness of nesting shorebirds, educate people about them, monitor nests, and notify authorities if protective action is needed.

How You Can Help

There are things all beachgoers can do to minimize their impact on breeding shorebirds:

Perhaps the most important thing anyone can do is to recognize that shorebirds live and breed on the same beaches that people enjoy.

Summer is coming. Enjoy it, but please enjoy and respect the shorebirds also.