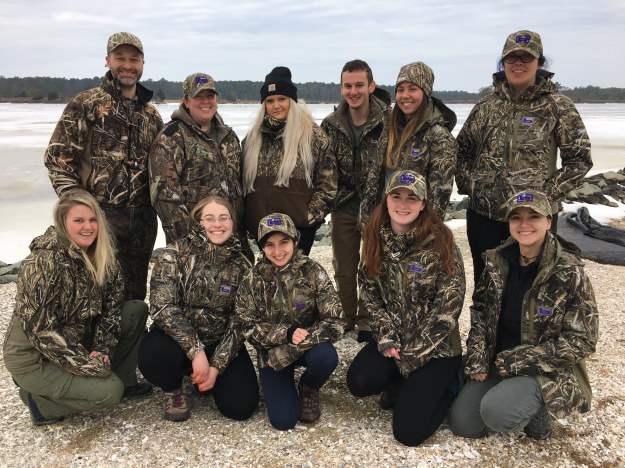 Students from the University of Delaware pose for a group photo during their waterfowl hunting education course at Blackwater NWR, Credit: Chris Williams

Recently, a group of University of Delaware students visited Blackwater National Wildlife Refuge in Maryland to learn about waterfowl hunting and wildlife conservation. Although they’re each pursuing studies in natural resources, all of them were first-time hunters. 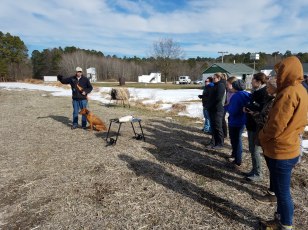 Aside from the practical training and experience in the field, the program prompted the students to explore their feelings about hunting in general. Here are some of their individual thoughts about the experience.

How I dealt with feelings of  guilt:

“My fears spawned from the action of the hunt itself; if I do succeed, how will taking that life affect me, either on site or after I come home? Can I personally consider taking a life, “success”? Will I let my leaders down if I cannot bring myself to squeeze the trigger after all the effort in training me?” 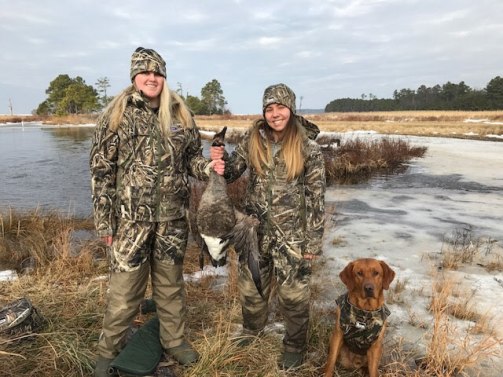 How I made it through my first hunting trip:

“In fact, I was calm up until it was time to shoot. Everything happened so quickly. I am not used to shooting a gun, I am used to shooting clay birds, and I have no idea how a bird even lands in the water. I shortly found out, very quickly. I am up first. I see birds coming in as Jerry tells me to get ready. I respond as if I have never shot a gun before. I forget how to even hold the stock into my shoulder. As I am struggling to think straight, the birds see us and fly away.” 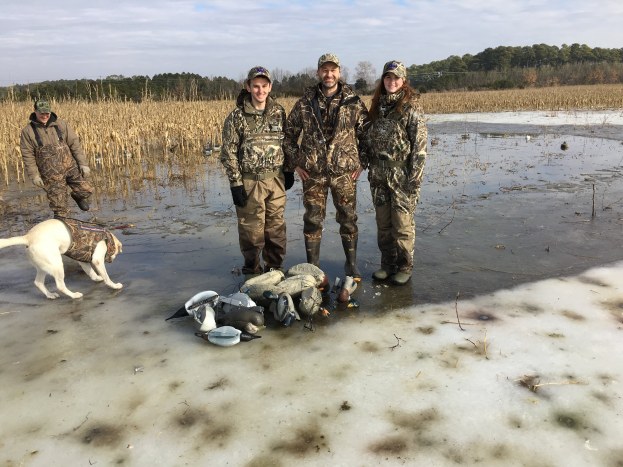 How my opinion on hunting has changed:

“I find that my opinion of hunting has changed considerably through the course. I always knew intellectually that hunting was an integral part of managing many species across the globe, but really honing in on the specifics and taking a part in that management connected me to the topic more. I learned so much about how setting goals for certain waterfowl species can aim to stabilize their population, and I got to participate in making those goals a reality.” 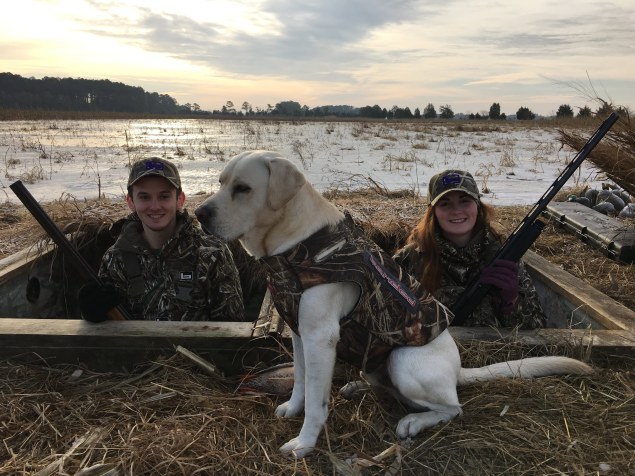 My final reflections on the day:

“The one time I began to feel guilty and question exactly why I went hunting was when I talked to my boss about it. She knows there are population control benefits to hunting, but wasn’t sure why I personally wanted to be a part of it. Like many of my friends and family members, she was surprised to hear that I, animal lover extraordinaire, truly enjoyed killing an animal. It was difficult to explain why I wanted to and enjoyed the hunt when put that way, but I was able to “change her mind a bit” after I told her about the economic benefits, the reasoning behind certain policies, impact of invasive species, and so on. I will certainly have to do some more self-examination to determine my true stance, but that is a challenge I welcome.”

Imagine knowing the abundance, distribution, habitat preferences, breeding ecology, migration pattern, and wintering habitat for 100+ bird species in the State of Connecticut. This is no simple task, but it is one that the University of Connecticut and the Connecticut Department of Energy and Environmental Protection, along with many other partner organizations, citizen scientists, and bird lovers alike are willing to take on. The Connecticut Bird Atlas, starting in Spring 2018, will be the second such atlas conducted in the state, with the first Atlas of Breeding Birds in Connecticut published in 1994. 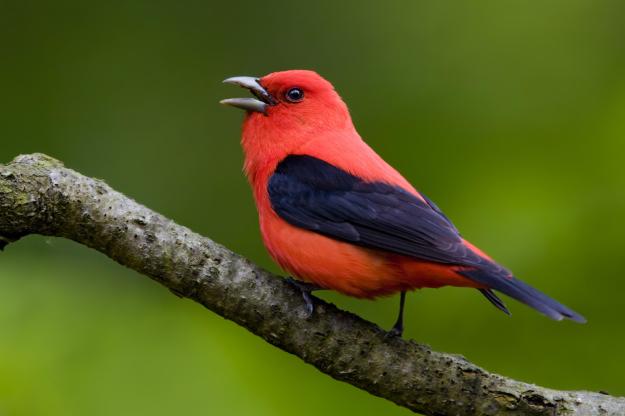 Unlike the first Connecticut Breeding Bird Atlas which aimed only to identify breeding distributions of Connecticut’s birds, the new study will survey distribution and abundance patterns throughout year, during both the breeding and non-breeding seasons. “The assessment will give us more detailed ecological information in terms of breeding dates, timing of migration, when wintering species arrive to overwintering areas, and how long they stay in overwintering areas,” says Randy Dettmers, senior migratory bird biologist for the U.S. Fish & Wildlife Service division of Migratory Birds, and contributor to the Connecticut State of the Birds. 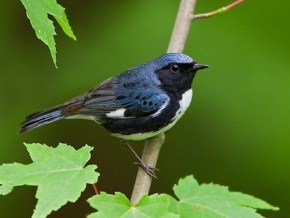 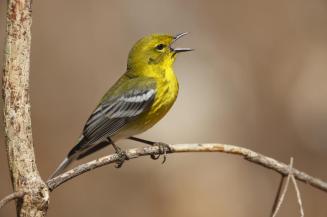 Almost three decades since the first Atlas, the habitat for birds in Connecticut has changed significantly. Development and expanding infrastructure have fragmented habitats, a benefit to birds who are habitat generalists but a detrimental change for species that require large areas of undisturbed forest; reforestation of previously developed land has benefited birds that use both mixed hardwood and coniferous forest, but presents challenges for birds that rely on early successional habitats (young forests); loss or conversion of agricultural lands has negatively impacted birds that prefer the old agricultural fields or grasslands but benefit birds who prefer forested habitat; and more variable climate conditions have resulted in birds with a historically “southern” range to now reside in Connecticut year-round. The new Atlas will capture the changes in abundance, distribution, and species composition as a result of these habitat changes, and the data will have implications for creating sound conservation plans, including the Connecticut State Wildlife Action Plan, that will benefit birds and other wildlife. 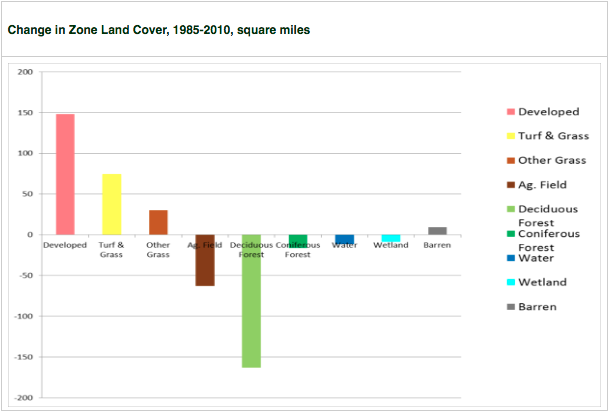 Birds are an indicator species for the health of our environment, meaning the presence, abundance, or absence of birds is indicative of a change in the biological health of an ecosystem.

Birds make an excellent proxy for diagnosing the health of an ecosystem which includes birds, other wildlife, and people. They serve as an indicator for how we are adapting or not adapting to the changing landscape and changing climate, making the new Atlas an essential decision-making tool for land managers, municipal planners, developers, state and federal agencies, and conservationists alike. 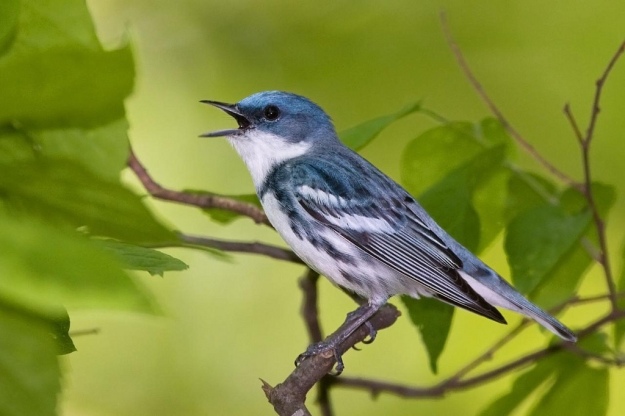 The cerulean warbler was identified as a “Forest Health Indicator Species” by the Connecticut Forestlands Council Forest Ecosystem Health Committee for deciduous woodlands. Among the rarest Neotropical migrant songbirds, their populations continue to decline due to loss of breeding, migrating, and overwintering habitat.

As often stated, birds do not recognize boundaries, and can be thought of as having dual citizenship. Therefore, the new Atlas will not only provide important implications for the state of Connecticut, but will be used to develop and implement comprehensive, region-wide conservation management strategies. “The updated information from the new Atlas will help us understand how different bird species are shifting their distributions and abundance in southern New England,” says Randy Dettmers. “When comparing the data to information from surrounding states, we will gain a better understanding of how birds are responding to larger environmental changes, including changes in land use, levels of contaminants in the environment, and changes in temperature and precipitation patterns.” 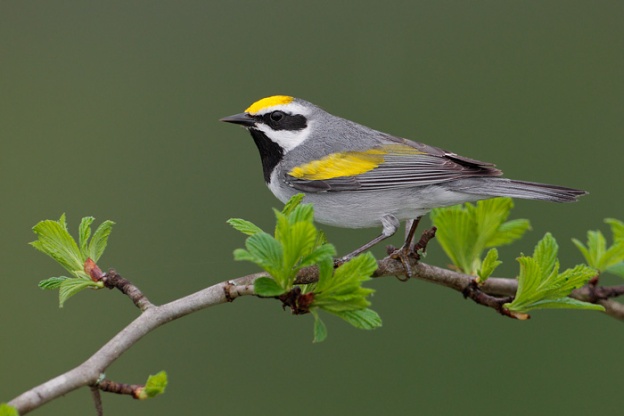 The golden-winged warbler was identified as a “Forest Health Indicator Species” by the Connecticut Forestlands Council Forest Ecosystem Health Committee for shrubland and young forest habitats. Populations are declining due to loss of breeding and wintering habitat.

Without citizen science, scientists would not be able to collect the necessary data to accomplish the task at hand.

The CT Bird Atlas project will be accomplished through the collaborative work of professionals and citizen scientists. Interested in taking advantage of this opportunity to learn about birds and their habitats, gain science skills, and connect with nature while giving back? Check out the CT Bird Atlas website here to see how you can get involved! 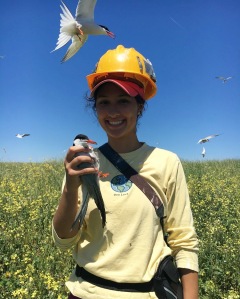 I’ve caught what some people call the “bird bug” – AKA the overwhelming joy that follows after working with cool avian critters.

I took in the full expanse of the beach, with lapping waves and a calm endless stretch of sea. It was about 8 in the morning.  I waded up to my knees carrying my provisions above my head. As I climbed aboard the boat, I buckled my life vest and grabbed the metal pole beside the steering wheel. Kate Iaquinto, Monomoy National Wildlife Refuge’s wildlife biologist, took the helm and we started across the open water. The ocean smelled amazing. It was clear skies and sunny, and the rush of the speed and ocean breeze made it very comfortable. The little furry brown heads of seals popped up from time to time, curious about our passing.

After about 10 minutes, we dropped anchor and we waded our way through the water past trails of horseshoe crabs and onto shore.  As I looked ahead, birds were everywhere.  As I wasn’t too confident in my bird identification abilities yet, I asked myself were all of these birds terns?

I followed behind Kate until we came to the camp site set up with tents. In a stretch of sand about 7 miles long, I was informed there were 11,723 pairs of common terns on the island! After not being in the tern colony for more than 2 minutes, poop flew down from the sky onto Kate’s face barely missing her mouth. It was inevitable really, and it could only mean good luck, right? 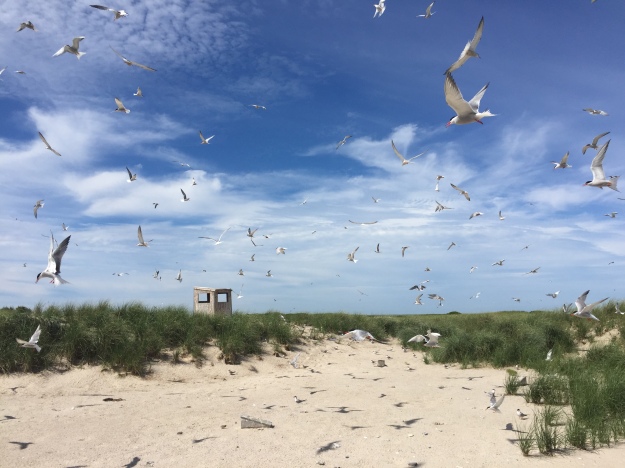 I was informed to grab a yellow hard hat with marker flags to protect the terns and my head, and off I went with Kate and four Student Conservation Association interns.

Four speckled white and black eggs in the sand. I was surprised at the tern interns’ intense enthusiasm about these eggs. We had passed dozens of nests already. I shortly learned, these were very different. The four interns told me this was a skimmer’s nest. I had never heard of a skimmer bird. Apparently, there had not been a skimmer’s nest observed on the island for quite a long time. What a success! 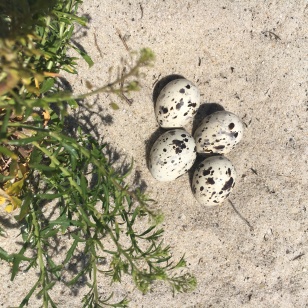 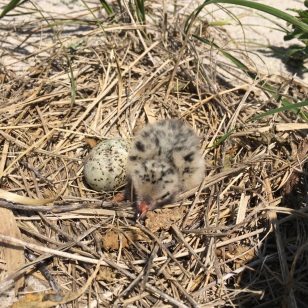 As we went out into the field, we surveyed the nesting plots where nesting adult terns and their chicks resided.  And boy are the little ones expert hiders. They can find the smallest pieces of vegetation, and under its protective cover they blend in perfectly with the sand. 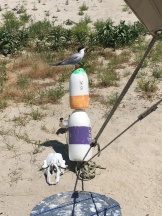 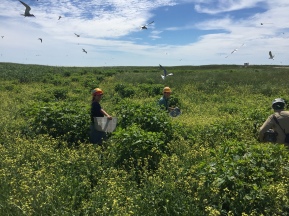 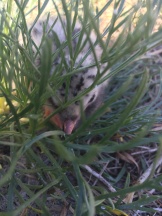 I read off their band numbers ensuring they were present and healthy, while admiringly looking at the squirmy bodies of fluff. This process of surveying helps Kate and the tern interns identify success of terns nesting on the island. As we moved from plot to plot, laughing gulls called out in hysterical ‘has’ and I couldn’t help but also laugh myself.

Common terns fledge, developing feathers for flight, between 22-28 days old. Their eggs come in a variety of colors: green, creme, turquoise, and brown, with speckled dark spots. They generally have a clutch size of about 1-4 eggs. Roseate terns, a federally endangered species, often reside within common tern colonies. Although common terns are not endangered, they are a species of concern in Massachusetts. 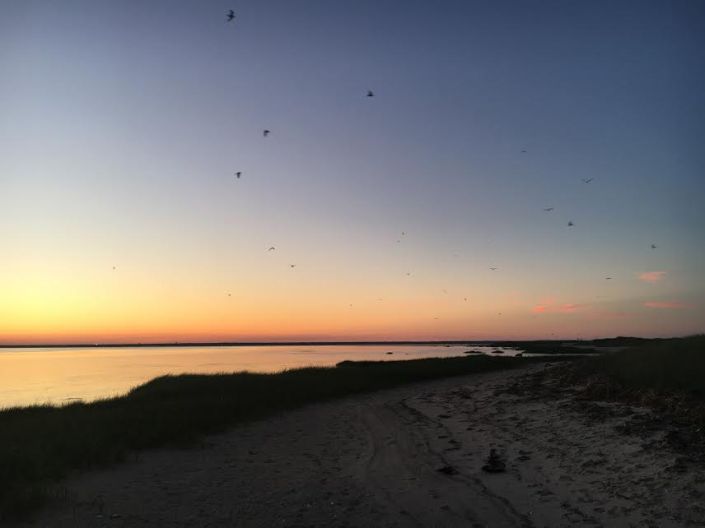 Throughout the course of the day, I had banded four birds with the help of Kate. As I sat on the beach taking pictures, the sun cast a fine glow of colors across the horizon and a pair of oystercatchers moved along the shoreline nearby.

Overall, it was amazing going out into the field at Monomoy and I am grateful to have experienced this unique adventure during my inTERNship.