A wave of energy rolls off the bus with sleeping bags and tents slung over shoulders. Roughly 30 kids are setting out on a new adventure in an unlikely place. The murmurs of excitement grow louder as the campers approach their campsites.

At the foot of Cayuga Lake in central New York, Ithaca Children’s Garden champions opportunity to connect people to the outdoors in an urban environment. The all-inclusive green space welcomes anyone from anywhere to explore, play, and learn.

For the first time, Ithaca Children’s Garden partnered with the Service’s New York Field Office (NYFO) to offer an overnight camp out for kids that may have never had the opportunity to sleep outside*. A youth summer camp of the Greater Ithaca Activities Center (GIAC) was the piloting crew for the camp out.

“This is just absolutely beautiful” exclaims one of the counselors, named Derek, as he walks through the Garden. He is 57 and says he is embarrassed he has never been camping before now, but is eager to change that.

It’s a warm July evening and the Garden is full of life – from the plants and wildlife to the energetic kids. After a brief walking tour, everyone breaks into teams to learn how to pitch their tents.

Thanks to Cornell Outdoor Education and Eastern Mountain Sports, the group was well-supplied with tents, sleeping bags, pads, and headlamps. Food was generously provided by local markets including Wegmans, Aldi’s, GreenStar, and Ithaca Bakery.

Once sleeping arrangements were set and everyone was fed, it was time to play and learn. The NYFO organized an interactive “bat echolocation” game, much like “Marco-Polo,” where players had to rely on sound to catch the “prey.” Campers also learned how to identify various nocturnal wildlife sounds.

Of course, no camping trip is complete without a campfire and s’mores. Everyone learned how to safely build a fire outdoors before roasting their marshmallows. Later in the evening, sugar highs were expelled through games of spotlight tag. Tired campers enjoyed stories and social time in their tents before finally drifting off to sleep.

Campers enjoy a fire they learned how to build themselves.  Photo: Justin Dalaba/USFWS

Cornell Lab of Ornithology loaned binoculars for an early morning bird walk led by ornithologists Robyn Bailey and Paul Paradine the next day. “The cool thing is that the kids don’t realize we’re tricking them into learning,” says Courtney, a longtime counselor with GIAC. 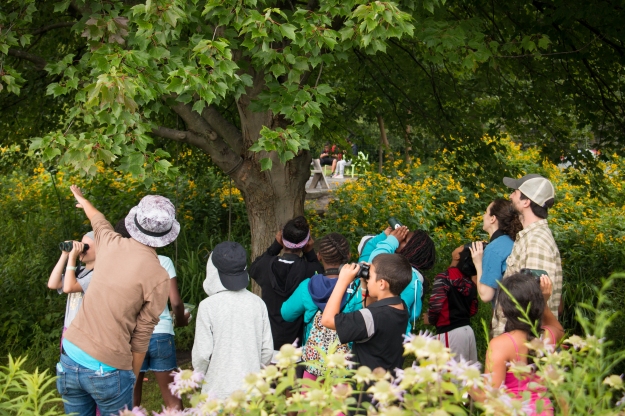 One of the campers later told GIAC counselor, Derek, that it was the best day of his life. Another camper said they “loved camping at the Garden” and “want to do two nights or a week!”

The success of this first camp out speaks to the partnership efforts to pull together resources for the greater benefit of urban youth. For an event like this, the Garden took on a whole new sense of belonging to campers who had never spent a night outdoors.

*Please note that ICG is free and open every day during daylight hours, and camping is not allowed without express city approval for special events.