A Tree Swallow on our farm in Swoope. (Photo: R. Whitescarver)

Today we share a story from Bobby Whitescarver, of Whitescarver Natural Resources Management, about recent work to study and mitigate the effects of a mercury leak on tree swallows in Virginia. The research helped secure a settlement from DuPont, the synthetic fiber production plant responsible for the leak. Read the original post here

There are many harbingers of Spring in Swoope; the yellow blooms of daffodils and forsythia, the sounds of spring peepers, and pastures changing from brown to green are only a few. My favorite harbinger of Spring is the arrival of Tree Swallows, Tachycineta bicolor. I start looking for them in late February. This year they arrived in Swoope on March 18.

Our Tree Swallows migrated almost 2,000 miles North from Florida and Cuba. They come here to breed and raise their young, returning South in the fall.

We maintain forty-eight nest boxes for them and other cavity nesters such as Eastern Bluebirds and Carolina Chickadees. There must be a hundred Tree Swallows along Trimbles Mill Road and the Middle River. There are often two or three birds around each nest box.

Anytime we drive a truck or tractor into a pasture it disturbs insects. The Tree Swallows come to get them. They are joined by Barn Swallows, Cliff Swallows and Northern Rough-wing Swallows in the feeding frenzy. It’s an amazing show of flight with colorful dives and swoops.

The College of William and Mary Research Team
We have always had a few nest boxes but in 2005 Dan Cristol, Chancellor Professor of Biology from the College of William Mary asked us if we would participate in a research project to study the biomagnification of mercury up the food chain. He and his students put up hundreds of nest boxes along the Middle, South, and North Rivers in Augusta County. On our farm, they added thirty nest boxes to the ones we already had. 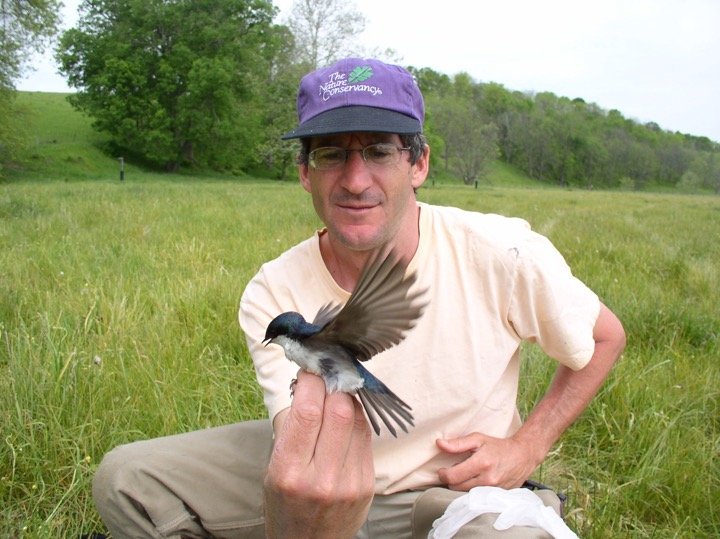 Dr. Dan Cristol, Ornithology Professor at the College of William and Mary. He is holding a Tree Swallow captured along Middle River in Swoope, VA. (Photo: R. Whitescarver)

Mercury Contamination of South River
Waynesboro, Virginia, was the site of a Dupont synthetic fiber production plant that discharged mercury into the South River from 1930 to 1950. The Middle and North Rivers were used as reference sites in the research because they didn’t have legacy mercury discharges in the River.

Tree Swallows Were the Main Species of Study
Tree Swallows were their main species of study because during the breeding season they eat only flying insects. Insects such as mayflies, dragonflies, caddisflies, and stoneflies spend their immature life in streams and rivers. The ones in the South River spent their aquatic life in the sediments contaminated with mercury. When these aquatic insects hatch from the water becoming flying insects, many are eaten by Tree Swallows. Subsequently, they feed their babies these insects and they, in turn, ingest the mercury.

Their groundbreaking research was published in Science magazine in the April 2008 edition. The article, “The Movement of Aquatic Mercury Through Terrestrial Food Webs,” states,

“Mercury is a persistent contaminant that biomagnifies up the food web, causing mortality, reproductive failure, and other health effects in predatory wildlife and humans.”

Their studies proved that mercury, in fact, does biomagnify up the food chain; twenty times higher than in the reference birds on our river.

Their six years of field research was, to their knowledge, “the first study to suggest disruption of multiple endocrine functions by mercury in wild animals,” one research paper attests. Cristol and his students published over fifty papers on their findings of mercury in wildlife. 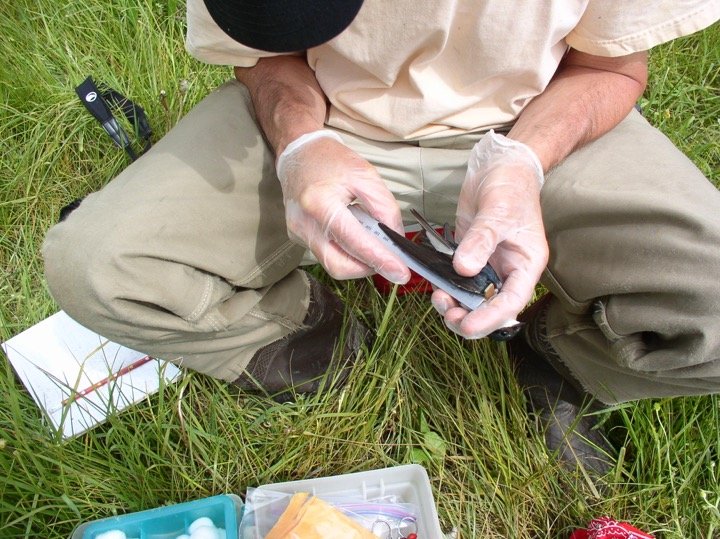 Mercury Greatly Reduced Tree Swallow’s Ability to Withstand Heat
“The mercury-exposed swallows suffer a reduced hormonal response to stress, altered thyroid hormone levels, suppressed immune system, twenty percent fewer offspring annually, and most interestingly, a greatly reduced ability to withstand heat waves. Normally hot weather is great for them because of the increased number of insects flying around, but on the contaminated sites, that is when the babies tended to die…so there is trouble ahead when mercury and global climate change run into each other,” Cristol wrote.

The William and Mary field research ended in 2010 but we still maintain the nest boxes and added even more. It is a joy to see their metallic blue/green upper bodies and white breasts flying around the pastures in pursuit of insects.

The College of William and Mary was a member of the South River Science Team that used research to understand, educate and reduce the effects of mercury in the South River.

We are very proud to have been a small part of this massive research project that resulted in some form of environmental justice for the decades of mercury contamination of a major river.

Tonight our New England staff are meeting with southeastern Massachusetts and Rhode Island communities around Buzzards Bay to share our proposal to use $4.8 million in oil spill settlement funds to fund projects restoring public access and recreational use of natural resources and restoring some shoreline and aquatic areas.

“I’m thrilled that we have the opportunity to work with our partners and the public to improve the quality of Buzzards Bay and surrounding natural areas,” said Tom Chapman, the head of our New England Field Office.

Here’s an aerial view of Round Hill Marsh in Dartmouth, Mass. The central portion was filled nearly 100 years ago. Under the proposal, fill would be excavated from the historic salt marsh and tidal flow would be re-connected to restore up to 12 acres of salt marsh. The opportunity to reclaim this valuable coastal ecosystem is only possible because of a partnership and cost-sharing effort utilizing Bouchard oil spill settlement funds, New Bedford Harbor NRDAR settlement money, and a grant from the DOI Hurricane Sandy Resiliency effort. Credit: Massachusetts Division of Ecological Restoration.

Check out the below post from another one of the natural resources trustees in the proposal, our partner NOAA.

PCBs released from General Electric facilities on the Upper Hudson River present a serious and long-term threat to the health of the entire Hudson River ecosystem. Living resources at every level of the Hudson River’s aquatic, terrestrial, and wetland-based food chains are contaminated with PCBs. The Service, NOAA, and NYDEC are measuring the harm caused by this contamination.