I’m Bethany Holbrook, and I work at our New York Field Office. You’ll be hearing from me every week! Stay tuned for tales from the great state of New York.

The launch was packed with reporters, interested locals, several resource agencies, and 11,000 juvenile lake sturgeon ready to be released into the wild. All were present for the annual sturgeon stocking, a program led by the New York State Department of Environmental Conservation (NYSDEC) with supportive funding from the State of New York and our agency’s Fish Enhancement, Mitigation, and Research Fund.

You could feel the heightened excitement as hatchery trucks from pulled into the boat launch parking lot: the end to a 1,000-mile journey from the Service’s fish hatchery in Wisconsin, where all 11,000 sturgeon were raised. Reporters were busy talking to biologists, spectators were busy snapping pictures, and the truck drivers were busy prepping the fish and the nets for the release. 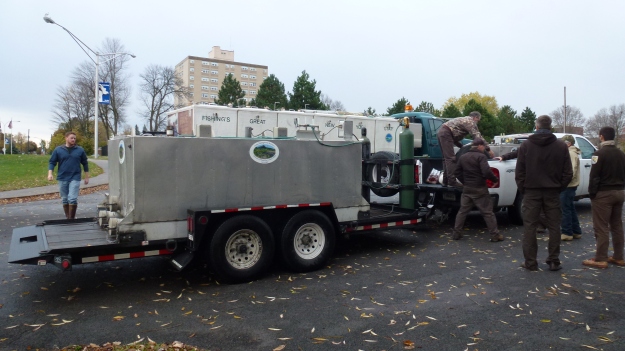 Biologists started by transferring approximately 3,000 fingerlings from the Service’s truck to the NYSDEC Chateaugay Fish Hatchery truck. One by one, biologists would scoop a large net (capable of holding 300-500 fingerlings) into the giant coolers holding hundreds of gallons of water and thousands of fish, and transfer them to a cooler on the other truck.

From here, the NYSDEC truck would travel to six other locations on three separate rivers while our truck would release 7,000 fingerlings, net by net, into the St. Lawrence River at the boat launch. Additional fish were raised at the NYSDEC Oneida Fish Hatchery in Constantia, N.Y., and were released in Cayuga Lake and the Genesee River in mid-October.

Transferring about 3,000 fish from the Service’s truck to the NYSDEC truck. Credit: USFWS

Fish from the Service’s truck are transferred to the tanks in the NYSDEC truck. Credit: USFWS 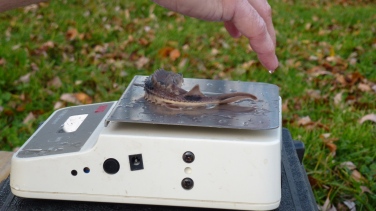 Service biologists took a sample of 50 fingerlings and measured their weight to find an average. Credit: USFWS

Service biologists took a sample of 50 fingerlings and measured their length to find an average. Credit: USFWS

Seven thousand fingerlings are released from the truck into the St. Lawrence River, one net at a time. Credit: USFWS

From Ogdensburg, the Genoa National Fish Hatchery truck stopped at the St. Lawrence Power Project in Massena and released the remaining 500 fingerlings below the dam.

The NYSDEC hatchery truck left Ogdensburg and traveled to the Pine Ridge Campground in Constable, N.Y., where another 500 sturgeon fingerlings were released in the Salmon River.

Students from the Akwesasne Freedom School were present at the site to help with the release and receive a hands-on lesson about lake sturgeon.

Students were able to hold the fingerlings in a touch tank set up at the site, and also help biologists with weight and length measurements for several fingerlings.

Students releasing buckets of fingerlings in the Salmon River at the Pine Ridge Campground. Credit: USFWS

Students took turns measuring the length and weight of the fingerlings. Credit: USFWS
After leaving the Pine Ridge Campground, the NYSDEC truck made another stop along Route 37 in Fort Covington to release an additional 500 fingerlings in the Salmon River. From there, the truck traveled to Brasher Falls and Brasher Center to release 1,000 fingerlings at 2 locations on the St. Regis River. Next, the NYSDEC hatchery truck drove to Raymondville and finally reached the end of its journey in Massena Springs to release another 1,000 fingerlings at 2 locations on the Raquette River.

One of our biologists, Scott Schlueter, releasing sturgeon in the Raquette River in Massena Springs. Credit: USFWS

The fingerlings were four months old and measured approximately 4-6 inches in length. I was amazed to see how calm the fingerlings were when handled; they would allow you to pick them up and hold them without much resistance. The intimidating sharp-looking bony scutes on their backs weren’t sharp at all, but instead provide the juveniles with great defense against predators, boosting their survivorship rate.

Sturgeon have a hard, spiny exterior, but their bony scutes along the top and sides of their skin are not as sharp as they appear. This protects them from predators as they feed on the bottom of the river. Credit: USFWS

The sturgeon stocking program has proven to be extremely effective, as we are just starting to find young wild sturgeon in stocked areas, a sign that indicates successful reproduction of stocked fish in past years. With continued commitment from resource agencies in stocking efforts, we can hope to see more of this prehistoric species in New York waterways as the program continues.