On June 23, seven people were working at the USFWS hatchery in White Sulphur Springs, WV, when flood waters hit.

“It was raining hard that day, but we get high-water events around here. The hatchery has a berm to keep out high water at 100-year flood levels, so we weren’t too concerned at first,” says Tyler Hern, a fish biologist at the hatchery.

But it wasn’t long before Hern and the other staff realized that this was not a “normal” high-water event.

“First the culvert flooded, then we saw water coming in the raceways and realized this was serious,” continues Hern. “Water was just rising before our eyes. We went from normal to emergency in an hour.”

The staff decided to retreat to higher ground to a partner station on a nearby hill. But Hern, who lives at a house on the hatchery grounds, decided to go home.

“My house is about 200 yards away up on a hill and my girlfriend was home calling me – she was anxious about the water,” says Hern.

So Hern did what any fast-thinking, resourceful biologist would do – he climbed the nearest tree.

“I think I did a pretty good job of picking a tree,” he laughs. By then the water was about 6.5-7 feet deep and moving very fast, with debris floating in it. But Hern felt safely ensconced in the sturdy hemlock. 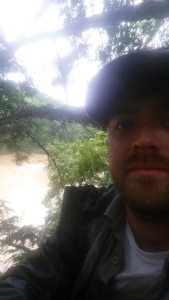 Tyler in the hemlock

“I only got worried once the thunderstorms came. I was in the tallest tree and didn’t want to get struck by lightning,” he says. To be safe, he positioned himself on a branch in such a way that if he were knocked unconscious, he wouldn’t fall out of the tree into the water.

And then he waited. For about five-and-a-half hours, during which time his cell phone rang off the hook with staff and his girlfriend checking in on where he was. The noise of the rushing water was deafening. Finally, at about 8pm, Greenbrier County Rescue Squad showed up . They were able to drive a front-end loader through 6-7 feet of water and get Hern down safely.

Hern wasn’t the only one receiving rescue assistance. The devastating floods killed 23 people and damaged or destroyed 1,200 homes across Roane, Kanawaha and Greenbrier Counties. It’s estimated that 8-10 inches of rain fell in just a few hours, an amount considered to be a 1-in-1,000 year event.

In the days since the floods, Hern says the community has really banded together.

“I’ve never seen people come together better and faster than here. The support we’ve received and given each other is just great,” says Hern. “When things like this happen, everyone’s a West Virginian. Neighbors help neighbors.”

Restaurants in town have been cooking up free food for people and the Greenbrier Resort, which was supposed to host a PGA tour this week, is closed except to people who lost their homes. Help has poured in from all parts of the state and beyond. A crew from the USFWS regional office in Hadley, MA, went down to the hatchery to help conduct damage assessment and others are helping with the clean-up – shoveling mud and removing debris from the facility.

“It’s pretty devastating to look around the hatchery now,” says Hern. “It’s hard to see all our hard work get washed away.”

The hatchery sustained significant damage to buildings and equipment from the floods. Worse, all 45,000 rainbow trout were lost – 15,000 adults died and another 30,000 juveniles survived but had to be released due to contamination. The hatchery, which was established in 1902, has raised trout as part of the National Broodstock Program along with mussels and crayfish for recovery of rare species. One positive note is that all of the 9 endangered and imperiled species of mussels at the hatchery survived.

“The mussel facility took the brunt of the flood but when the waters came in, all the mussel tanks floated. So that saved the day there,” explains Hern.

Despite the destruction, Hern is optimistic about the future. The Service is committed to reopening the hatchery and returning to full operations again as soon as possible.

“It’ll take time to get back up and running, but we’ll get there. I can’t say enough about how great our staff is – their dedication and hard-work is inspiring,” says Hern. “It’s a major disaster but a minor setback.”

Conserving fish and keeping rivers and lakes healthy for all nations for all people takes cooperation and collaboration. The Northeast Fisheries Program of the U.S. Fish and Wildlife Service works with Native American governments to bring back self-sustaining populations of native fish–Atlantic salmon, Atlantic sturgeon, American shad, lake sturgeon and lake trout, to name a few. 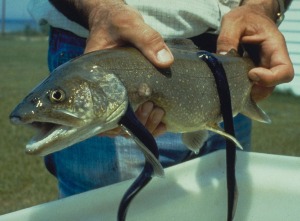 Together we share funding and brain power to determine biological needs, decide where to focus habitat restoration, monitor overall health and distribution of wild fisheries and determine when to use hatchery-rearing and stocking to give a boost to wild populations.

Our biologists have helped tribal groups from Virginia to Oregon learn about shad and freshwater mussel culture. We produce lake trout at Allegheny National Fish Hatchery to stock into tribal and public waters. And we help the Seneca Nation to control sea lamprey, which have had devastating effects on native lake trout. We also work with the Six Nations of the Iroquois to restore lake sturgeon. 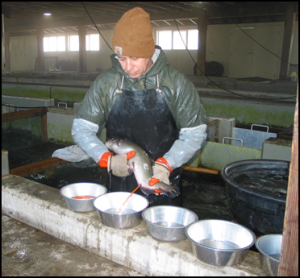 Mike Whited is spawning rainbow trout at the White Sulphur Springs National Fish Hatchery. These rainbow trout eggs are destined for someone’s fishing pole and dinner plate after they have been reared to stock-able size at tribal and other national fish hatcheries. Credit: USFWS.

This ongoing collaboration reverses 200 years of degradation by removing several dams, returning thousands of river miles for migratory fish such as Atlantic salmon, Atlantic sturgeon, shortnose sturgeon and American shad. It makes the river healthier for all fish, too. 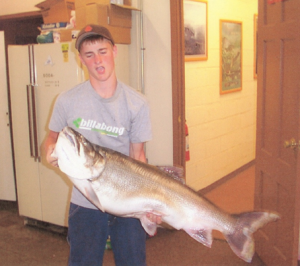 This Lake trout caught in 2003, weighed 41.5 lbs and measured 42.5 inches, and still holds the New York state record. Because the fish was tagged, we can trace the fish back to an Allegheny National Fish Hatchery stocking event in 1985. Credit: NY State Department of Environmental Conservation

Our scientists at the Northeast Fishery Center in Lamar, Pennsylvania regularly monitor health of the rainbow trout, to certify the eggs disease-free.  This is critical to prevent the spread of aquatic diseases that could harm native fish, and threaten the health of aquatic ecosystems across the country.

Relationships with tribes to restore rivers, lakes and healthy fish populations enhances recreation and the economy on tribal and public lands across our nation and embodies the mission of the U.S. Fish and Wildlife Service: “working with others, to conserve, protect and enhance fish, wildlife, and plants and their habitats for the continuing benefit of the American people.”

For months I tried to imagine what it would be like to leave the hatchery, to say good bye to the almost one million babies that I had cared for since they were just fry, less than an inch long. When I left last week, the salmon that would be remaining in the pools through the winter were as long as 7 inches. Big kids!

For weeks, in preparation for setting free the smaller parr, we had been hand feeding the young salmon three times a day alongside the 100 pound mechanical food dispersers that fling food off and on all day long.

The threat of a government shut down loomed increasingly large over everyone’s head. As we fed, the tempo of grading and separating the fish for distribution increased with each passing day. Could everything that needed to be done to save the fish be accomplished in time?

Every day tanker trucks filled with tens of thousands of parr drove north to place the young fish into their home river streams to grow. Setting free the smaller parr: At release, thousands of young fish travel down a pipe from the tanks and enter a  shallow, gravely stream. Out of the rushing water they leap and fly…up into the sun. All around, autumn leaves shine scarlet and gold through the evergreens. Time for things to end. They have come home to a place they do not know, but will always remember. Carefully created by the fishery biologists, their genes know they have arrived. …Read the rest at their blog!