When winter storm Jonas barreled up the eastern coast last weekend, it wasn’t just the snow that left a path of destruction behind; it also caused serious coastal flooding along the mid Atlantic shoreline. The storm happened to coincide with a full moon, which in itself leads to extreme high tides. Add 80 mph hurricane force winds blowing water toward the coast, and freezing cold floodwaters move ashore.

Chincoteague National Wildlife Refuge, located on the coastline of Virginia and Maryland, was one location affected by the wind-driven tides. Their beach parking lot, consisting of sand and crushed oyster shells over a clay base and managed and maintained through a special agreement with the National Park Service’s (NPS) Assateague Island National Seashore in Maryland, was mostly washed away.

A view of the eroded beach parking lot at Chincoteague National Wildlife Refuge. What remains of the clay base layer is visible on the right side of the image. Credit: USFWS

This damage, though expensive and unsettling, has become a frequent occurrence due to the vulnerability of the extreme southern end of Assateague Island. The parking lot was built on unconsolidated sand deposited by the Atlantic Ocean since the 1850s. Because there is no supporting landmass to anchor this ​portion of the island ​in place, ​it ​​has slowly been moving west into Tom’s Cove (see image below). This dynamic movement of sand ​on a barrier island is natural but ​makes the parking lot vulnerable to erosion, especially during storms. 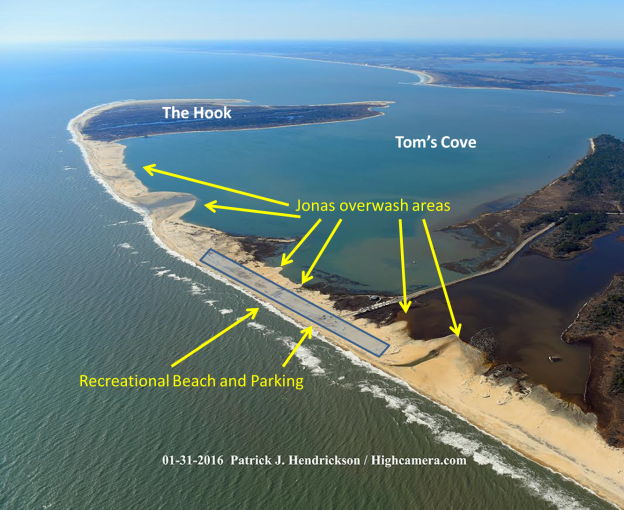 When there are storm surges or extreme high tides, seawater over-tops the beach and flows into the parking lot, sometimes causing damage as it did with this storm. Although the USFWS and NPS have tried various resiliency techniques (sand fence placement, dune construction, etc.) at this site over the past 50 years, at great cost to taxpayers, all attempts have failed because the site is constantly shifting.

Pictures of the current beach parking lot, before and after the storm.

In recent years, global climate change has led to an increase in the number and intensity of major storms affecting the shoreline at Chincoteague NWR, making the location of the current parking lot even more worrisome. For this reason, the refuge has approved a plan to move the parking lot to a more stable area one and a half miles north of the current location. The supporting land mass to the west of the new recreational beach and parking lot site and large man-made dunes  on the ocean front, add to its resiliency to storm damage.

The new recreational beach and parking lot location was virtually unaffected by the storm, further supporting the need to relocate. Unfortunately, winter storm Jonas hit before this new lot was in place.  Although uncertainties exist with regard to the severity of future storms, the amount of resulting damage, and the availability of federal funding, the FWS and the National Park Service have committed to maintaining the current lot until the new beach and parking lot is open and ready for use.  Therefore it seems likely that the parking lot at the current site will be rebuilt, a project that could cost taxpayers as much as $800,000.

“What this really comes down to is economic and environmental sustainability,” says Kevin Sloan, Project Leader of Chincoteague NWR Complex. “Over the past 50 years, taxpayers have been burdened with repetitive beach parking lot repair costs – an estimated $6-8 million since 2003 and now another $800,000.  And, another storm could be just around the corner.”

Sloan says continuing on that course and in the face of climate change and sea-level rise would be “fiscally irresponsible and unsustainable.”  Once the beach recreation infrastructure is relocated to the resilient site, he says, natural processes will continue to reshape the beach, providing tremendous habitat for migrating and nesting shorebirds.