I grew up spending my summers on the Cape. When I traveled there for Thanksgiving, my family discussed the impending erosion many of their neighbors are facing. Living about one hundred yards from the beach, they joked that sooner than later they’ll own beachfront property. Extreme, yes, but unlikely, no. As sea levels rise with a changing climate, the geology of these areas change and their natural resilience to intense storms is threatened.

Imagine if your beach front “backyard” suddenly crumbled into the ocean, or the streets of your town filled with water. Imagine losing all of your belongings, photo albums and objects holding dear memories. More importantly, imagine if you were injured – or worse, a loved one or family member was killed from these natural impacts.

Flooded homes in Tuckerton, N.J., on Oct. 30 after Hurricane Sandy made landfall on the New Jersey coast on Oct. 29 (US Coast Guard via AFP/Getty Images)
Credit: Boston.com

It has been argued that warming ocean temperatures contributed to the strength and impact of Sandy. As oceans warm, tropical storms and hurricanes that gather heat and energy through contact with warm ocean waters become larger and more powerful.  In addition, as ocean water warms and expands, global sea levels rise. Increased melting of ice caps and glaciers also contribute to rising sea levels. Storm surge from hurricanes on top of these higher sea levels will add up to increased erosion and inundation of coastal communities.  Predicting at risk areas is crucial, yet difficult, as beaches, barriers, and marshes all respond differently to warming, rising seas and storms.

Long Island Sound, part of the Connecticut River Watershed, is a perfect example of these effects. Home to an estimated 8 million people, Long Island Sound is a hotspot for heavy storm damage, due to high storm surge flooding, coastal erosion and rising sea levels.. Scientists expect a sea level rise of approximately 4 feet or more by 2100 in this area. Coastal resilience tools have estimated billion dollar coasts in damages and interrupted business if preventative tools are not implemented.

Most communities in the United States were built based on past rather than future trends. But, as storms like Hurricane Sandy devastate communities once thought to be safe, science is playing a key role in informing measures to protect human communities and help people and nature weather the storm.

The North Atlantic Landscape Conservation Cooperative (LCC), Northeast Climate Science Center and U.S. Geological Survey have joined forces on an effort to identify areas along the Atlantic Coast likely to be affected by stronger storms and rising sea levels and areas likely to be the most resilient. Mapping these areas will help inform better management decisions, ranging from preventative action to protection during a storm event. It is likely that more storms like Sandy are heading this way, so it only makes sense to learn from past experiences and plan for the future.

Destinations like Cape Cod and Long Island are bound to change. Residents are likely to see their backyards disappearing and the walk to the beach becoming shorter, some areas sooner than others. The question is not IF anymore, but when.

Our job now is to adapt, plan, and prevent.

While it seems counterintuitive, students can learn the most when they’re not at a desk. And that’s the mission of the Schoolyard Habitat Program — to teach students about the outdoors, while outdoors.

Hands-on learning is the name of the game here, with students and educators working with the U.S. Fish and Wildlife Service to assist students in restoring the natural landscapes around or nearby their schools.

If my teachers had brought me outside to learn when I was in grade school, I know I would have been paying attention — partly because it’d be impossible to read a book under my desk if I was walking in the woods, but mostly because being outside and actually witnessing the plants and animals you’re learning about is a tremendous boon to kids.

And to further assist anyone — teachers, parents, students, community leaders, whoever — that wants to learn more about the program, the Service has launched a new website. Check it out here.

Not only are students in New Haven actively working to create or restore patches of habitat for wildlife, the program teaches the value of conservation — something that’s difficult to teach indoors. But by getting their hands dirty and seeing the results of their work, students in the Schoolyard Habitat Program can learn about plants and animals they may find in their backyards while actually engaging with the habitat around them in a practical way.

Students, educators and Service biologists work together to improve patches of habitat around schoolyards. Credit: USFWS

The focus of the newly-launched website, the Schoolyard Habitat Program is located around the Long Island Sound area in Connecticut, and is focuses on initiatives by urban students. This area is typical of many in the Northeast — urban, developed and densely populated. Even in the midst of the urban landscape of southern Connecticut, restored patches of habitat are critical stop-overs for wildlife, as well as filtering water for pollution before it reaches Long Island Sound.

Through technical assistance and the help of biologists, this Program is a partnership between the Service, Audubon Connecticut and the EPA Long Island Sound Study. 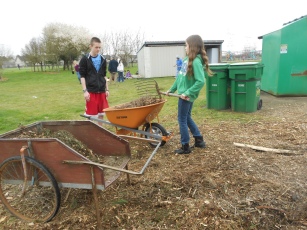 Not only does important habitat get restored, but students learn about nature through proximity, not via textbooks. Credit: USFWS.

This schoolyard habitat joins other habitats created throughout the Northeast, such as at Dunloggin Middle School, as well as others in the Chesapeake Bay region. At Dunloggin, students worked with the Service’s Chesapeake Bay field office to create a half-mile of nature trails and a riparian wetland to reduce surface runoff, earning the school a Maryland Green School certification and National Wildlife Federation habitat certification. In 2012, Browns River Middle School in Vermont participated in the Schoolyard Habitat Program, where students planted approximately 400 native trees and shrubs to increase wildlife habitat and provide a better buffer of forest for the river.

It’s hard to understate the importance of establishing a connection with nature at a young age. And with the Schoolyard Habitat Program, educators can help students make that connection.