This week is National Police Week and on this occasion we’d like to shine a spotlight on the Northeast Region Refuge Officer of the Year Jay Perez. Officer Perez is a federal wildlife officer serving the Maine Coastal Islands National Wildlife Refuge and other national wildlife refuges in Maine. He  was recognized for his notable efforts to protect a witness who was being threatened for providing critical information to law enforcement in a 2017 case of unlawful trapping on refuge lands.

Today, we’ll hear from Officer Perez about how he became interested in a wildlife law enforcement career, how his work impacts wildlife and conservation, his most memorable achievements so far and why he loves his job.

What is your background? Did you always want to pursue a career in conservation?

I fostered a love for the outdoors, especially hunting and fishing, growing up in Seymour, Connecticut. After graduating high school, I played minor league baseball as a catcher for the Houston Astros and Colorado Rockies. I went on to play professional baseball for three years before deciding I wanted to pursue a career in conservation law enforcement. I knew this career change would allow me to work in the outdoors and be closer to my true passions of hunting and fishing. I went on to attend Unity College in Maine where I received a degree in Conservation Law Enforcement and was lucky enough to work as a law enforcement intern for the U.S. Fish and Wildlife Service through the former Student Career Experience Program.

Officer Perez enjoys coming home from a long days work and being welcomed home by his son, Credit: Lori Perez

In what ways does your work impact wildlife and conservation?

Federal wildlife officers enforce laws and rules that are designed to benefit wildlife, protect people, and conserve public land. Without enforcing laws that protect wildlife it would be difficult for other programs within the Service to do their jobs. I’ve learned it is essential to provide enforcement and education to help other programs within the agency function properly.

What do you consider the most rewarding part of your job as a federal wildlife officer?

The most rewarding part of being a federal wildlife officer is seeing people enjoying the outdoors and abiding by the rules and regulations set in place, without any law enforcement engagement. I enjoy my job because I get to see kids hunting or fishing and overall enjoying the outdoors. Many of the kids who visit our refuges look up to law enforcement officers and wish to become one or even a game warden someday. This is a truly humbling thing to witness for me.

Are there any moments you’re particularly proud of?

I am particularly proud of the recent conviction on a case that helped me earn the Officer of the Year Award. The reason I am so proud of this is because the outcome affected so many people. It gave closure and security to the witness who came forward to the authorities with evidence and was later threatened by the defendant in the case. The case helped build partnerships between many of the law enforcement agencies in Maine.  It hopefully will stop the harassment that many of the residents in the area had endured for many years. Finally, it will protect the wildlife in the area from being illegally killed because the person convicted may not possess a firearm for the rest of his life.

Officer Perez has worked for the Service as a Federal Wildlife Officer for 12 years.  We’re really lucky to have him, and so many others like him, working for the Service.

Steve Agius has traveled the globe visiting many exciting and interesting places, including working in Antarctica with penguins and elephant seals. He’s now recently settled in Vermont as the new manager of the Nulhegan Basin Division of the Silvio O. Conte National Fish and Wildlife Refuge. I had the opportunity to ask Steve a few questions about his experiences, and I’m sharing some of his adventures here with you today.

How did you end up on your career path?

Growing up in New Jersey gave me the opportunity to explore the coast and many great state parks. In middle school I became interested in rock and ice climbing, and backpacking. I made a deal with my parents that if I could make the honor roll than I could take extended weekend backpacking trips to the Adirondack, Catskill and White mountains. By high school, my grades had dramatically improved and I was allowed the freedom to explore the mountains of New England. In the late 90s, I spent a month north of the Brooks Range in the Arctic National Wildlife Refuge. To be honest, I have never been the same person since visiting the Arctic. That refuge sparked a conservation passion inside of me that continues to this day.

Steve and some penguin buddies in Antarctica

Tell us more about your professional background?

I have a B.S. in Ecology and a M.S. in Zoology. My formal training has focused on birds, specifically colonial nesting seabirds. As far as conservation jobs, I have worked for the Service in California, Maine and Vermont, and for NOAA in South America and Antarctica. I have also worked for the State of Maine’s wildlife program, and for the Peregrine Fund at the Grand Canyon and Zion national parks. I have dabbled as an adjunct professor at Unity College and the University of Maine. 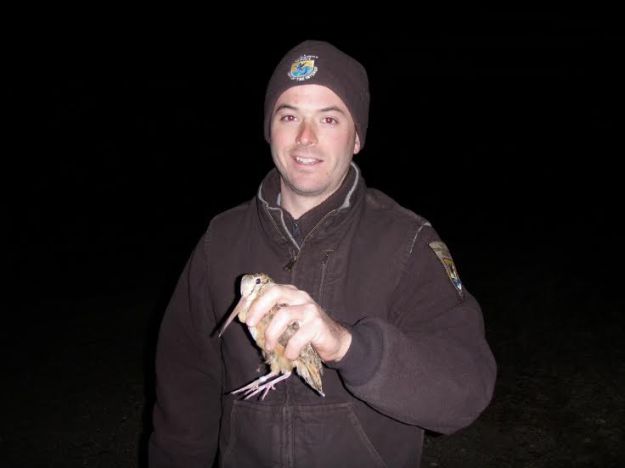 How is the Nulhegan refuge different from other refuges where you’ve worked?

From 2002 through 2010, I worked at the Maine Coastal Islands National Wildlife Refuge Complex. In 2011, I moved inland and worked at the Northern Maine refuge complex. The forest management focus at the Conte refuge is VERY different from seabird management. I loved being on the water in the Gulf of Maine, but working to develop and implement long term forest management plans (though daunting) is exciting work. Trying to restore forests that have been substantially altered by more than a century of industrial timber practices, while promoting priority wildlife species is a not an easy task.

Steve out exploring with his dog

Would you share a story about your greatest accomplishment and what it meant to you?

It can be hard as a federal employee to immediately recognize our accomplishments. We spend so much time responding to emails and focused on a screen that it can be a challenge to come up for air and see the world around us. Often it’s not about the big success stories that make a difference, but the little triumphs that keep us smiling and motivated. I take pride in the simple accomplishments like finalizing an agreement that prevents the National Guard from driving hummers in upland sandpiper habitat at Aroostook refuge, or performing a logistics support role to improve aquatic organism passage on lands around Moosehorn refuge, or overseeing the installation of 600’ of boardwalk at Sunkhaze refuge. Sure, we all love flashy success stories, but my pride comes from the little triumphs that add up to a bigger success.

Do you have a personal motto about your life and career?

I believe in integrity.  A person has to be accountable for their actions, respectful of others, and honest at all times. Maybe it has to do with being an Eagle Scout, but I would say that integrity best defines how I operate.

You’ve heard us talk about the incredible migration of the rufa red knot, but did you know the Arctic tern undertakes the longest migration in the animal kingdom? Check out what the Maine Coastal Islands National Wildlife Refuge is doing to unravel some of the mysteries of its journey.

Summer with the seabirds

Arctic Terns have arguably the most impressive migration of any bird – they travel from the Arctic to the Antarctic and back again just about every year of their lives.  While we’ve known for a while where the terns travel, how they get there has been something of a mystery. Do they travel along the coastline? Do they take a direct route from Maine to the Antarctic coast? Do they do a marathon flight from pole to pole, or make pit stops along the way?  These questions were nearly impossible to answer until very recently, for the simple reason that following a single tern (or even a flock of them) is nearly impossible. Terns are small birds – a little over 100 grams, or 3.5 ounces – so they can’t be equipped with heavy satellite tags. They also do mostof their traveling over water, so the odds of spotting a…