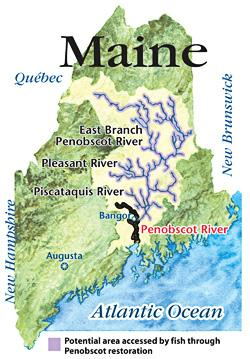 The Eastern Algonquian language is common to coastal river communities from Nova Scotia to North Carolina. The East Branch is named Wassategwewick for its fishing, and it is critical for restoring populations of Atlantic salmon. The Picataquis, meaning “little branch stream,” is very important to the Penobscot people as it is a travel route that has spawning habitat for Atlantic salmon.The lower Penobscot is where the name of the “Penobscot” came from, but the river is now dammed. Photo Credit: Atlantic Salmon Federation

Mattamiscontis means “a fishing place for alewives”. It is the stream that enters the west side of the Penobscot River above Howland, Maine. Migratory fish, including alewife, would fill the Penobscot River by the millions until dams were constructed in the 1830s and later. Traditionally, native peoples of the Northeast, including the Penobscot Indian Nation, used stone weirs along streams to harvest migratory fish. Atlantic salmon have not been able to be harvested because of the lack of sea-run fish above the Veazie dam. However, a wooden weir exists today in the Penobscot River drainage to capture adult American eels as they migrate to the ocean to spawn (Penobscot River Restoration Trust, 2017).

The Atlantic salmon was listed as endangered in 2011. The decline in the population was mostly from lack of habitat and connectivity of rivers used by spawning fish. For example, The Milford dam, West Enfield dam, and Weldom dam decrease the chances of connectivity for Atlantic salmon near the Penobscot Indian Nation’s territory. Additional riverbed damage occurred in the 1980’s from timber harvesting activities, destroying small protective pools for spawning fish.

The Penobscot Indian Nation applied to the Service’s Tribal Wildlife Grants (TWG) program and received funding for their 2017-2019 plan to increase the health of the culturally significant Atlantic salmon. The Tribe has been involved in the relicensing process for local hydropower dams, and in Federal Energy Regulatory Commission (FERC) meetings. Additionally, the Penobscot Indian Nation has delivered several projects to restore stream connectivity in the Mattamiscontis River.

Daniel McCaw, the Fisheries Biologist for the Penobscot Indian Nation, has been leading the aquatic efforts. In fact, McCaw hopes to see a significant increase of blueback herring and alewife in the Mattamiscontis outlet, East, and South Lake. 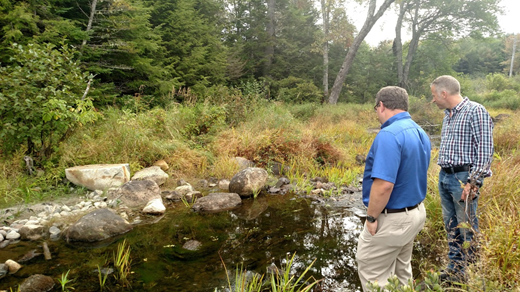 The Penobscot Indian Nation’s Atlantic Salmon Enhancement project has created passages for spawning fish that haven’t existed since the Penobscot River was rerouted by roads and logging enterprises. The project has included the installation of arch culverts to increase stream connectivity and natural flow passages to improve migratory fish passage. “My five-year dream is to have tribal gatherings here with smoked alewife,” says Daniel McCaw, Tribal Wildlife Biologist.

The Atlantic Salmon enhancement project has been visibility successful by reconnecting the Penobscot River to its natural route. In Mattamiscontis stream, Atlantic salmon parr (juveniles) have been found. They were taken to Craig Brook National Fish Hatchery to increase the population for release back into the watershed. 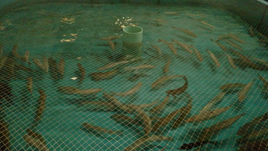 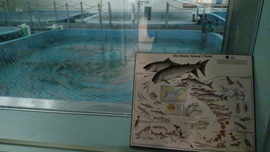 The Atlantic Salmon Enhancement project was made possible by the dedication and efforts of the Penobscot Indian Nation and the Tribal Wildlife Grant program of the Service. For more information on the program, please contact Richard Zane, richard_zane@fws.gov (the Northeastern TWG program coordinator) or Timothy Binzen, the Native American Liaison for the Service’s Northeastern and Southeast Regions timothy_binzen@fws.gov.