Katie Kain is a biologist at the Lake Champlain Fish and Wildlife Conservation Office in Vermont. Photo credit: USFWS

It’s pollinator season, and this week we are honoring these hard working animals that pollinate the flowers and plants we often take for granted. Today, Partners for Fish and Wildlife biologist Katie Kain shares her story on two projects that restored critical habitat for these small, but mighty animals.

A buckwheat plant is visited by a well know pollinator. Photo credit: USFWS

Did you know that more than 75 percent of all flowering plants are pollinated by animals? That includes plants that produce foods we love to eat, such as apples, almonds, honey, tomatoes and even chocolate!

But unfortunately many of the animals we rely on to pollinate are declining in numbers, and losing critical habitat for survival.

The landfill in Burlington, Vermont prior to preparing and seeding the site for restoration. Photo credit: USFWS

This is where the Service’s Partners for Fish and Wildlife Program is stepping in to help turn this trend around, and work with private landowners to create habitat that many pollinators need to thrive and survive.

Service staff at the Lake Champlain Fish and Wildlife Conservation Office in Vermont worked with the city of Burlington to convert an abandoned and grass capped landfill into a blooming sea of flowers and plants that would attract a variety of pollinator species, including the declining monarch butterfly. In addition, we worked with a private landowner and a local watershed organization, the Friends of Winooski River, in the state’s capital of Montpelier to create a riparian buffer planting on the landowner’s property. 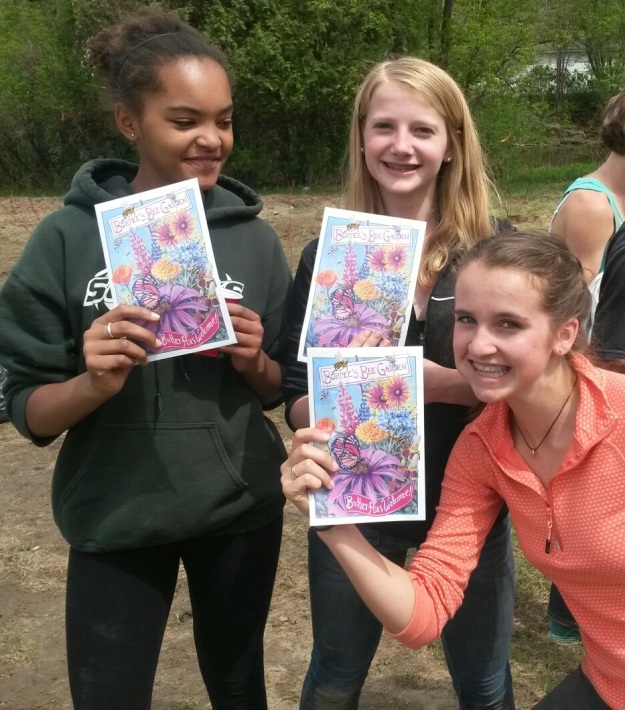 These enthusiastic students helped prepare and seed the area, while also learning something about the importance of pollinators. Photo credit: USFWS

Our team of wildlife biologists, along with student volunteers from nearby schools, began the projects with site preparations such as tilling and plowing the area to remove the existing sod layer. Next we seeded the area with a mix of native pollinator plant species, as well as a cover crop of buckwheat. When used as a cover crop, the buckwheat helps suppress weeds, increases soil organic matter and improves soil nutrients. And even though it is not a native species it is known to attract pollinators. By next season, the perennial native plants will have become solidly established and will provide a diverse array of plants to attract pollinators.

The buckwheat cover crop at the landfill after planting. Photo credit: USFWS

The field at the abandoned landfill sits adjacent to a well-used city bike path and will be enjoyed by many local residents and pollinators for year to come. Plans are already in the works to restore another section of the landfill in coming months. 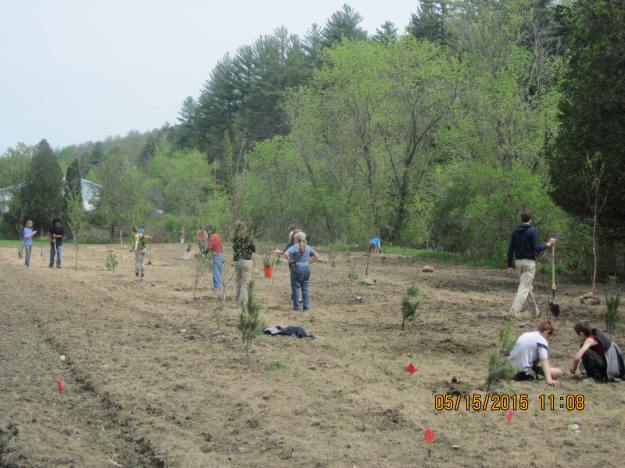 As for the riparian location, we were fortunate enough to work with a landowner whose interest in pollinators allowed us to modify the restoration plans to incorporate trees, shrubs and other plants that provide high quality pollinator habitat. The landowners are so pleased with the results that they promote the Partners for Fish and Wildlife Program with other interested landowners. In Vermont alone, the program has restored 225 acres of wetland habitat and 43 acres of upland habitat in 2015. 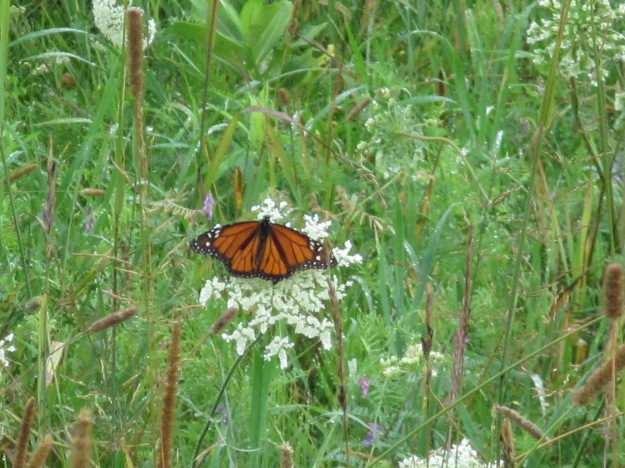 As we do with all our restoration projects, we will continue to monitor both these sites to determine the level of success in attracting pollinator species and refine methods for future, similar projects.

Learn more about the Partners for Fish and Wildlife Program.

It’s early November and, monarchs have finally completed their migration! The ones who have beat all the odds and survived predators, parasites, storms and a 3,000 mile flight, are ready to rest for the winter months in the Transvolcanic Mountains of Mexico.

During winter, the normally solitary monarchs will roost in large groups to stay warm and maintain fat reserves they’ve accumulated from the fall, clinging tightly to each other in oyamel fir forests. These tiny, dwindling stands of trees provide a microclimate with ideal temperature, humidity, and elevation for monarchs to overwinter. On brief, sunny occasions, monarchs will venture off in search of water, never straying too far from the protective cover of the mature fir canopy.

Monarchs cluster on oyamel fir branches and trunks for much of November through mid-March. Caption and Photo by Andy Davis.

Note the orange color of the monarchs and the deforestation that has occurred up to the colony edge. Caption and Photo by Lincoln Brower.

Monarch populations are monitored during the winter months because their distribution is so widespread during the migration and breeding seasons. While breeding populations in late summer are much larger, many monarchs don’t survive the migration and therefore do not contribute to the next spring’s generation. NatureServe and The Xerces Society for Invertebrate Conservation estimate monarchs occupy about 1.65 acres of oyamel fir forests across 12 different locations, a sharp decline from the 50 acre stand used by wintering monarchs in the late 1990s. As many know, the populations have dropped significantly in the last 20 years. Last winter marked the smallest overwintering monarch population that has ever been recorded. There are many factor influencing the decline of monarch populations. The occurrence of episodic weather events and loss of summer breeding habitat contribute to declining numbers, while illegal logging and invasive species have fragmented and compromised the integrity of the oyamel forests in which the monarchs overwinter. 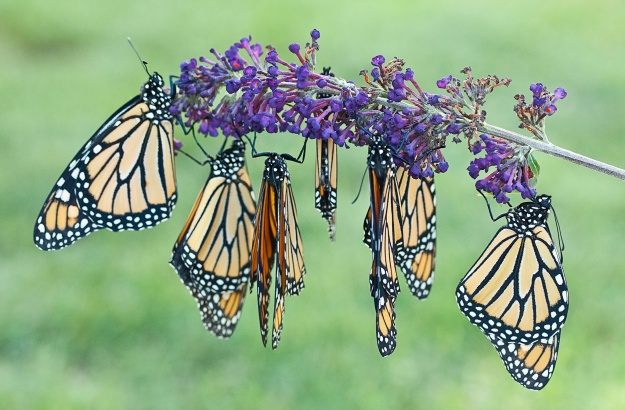 If this fascinating journey and tale of survival wasn’t interesting enough, the arrival of the monarchs coincides with a significant event in Mexican culture. October 31 marks the beginning of  “El Dia de los Muertos” or Day of the Dead, a time when everyone comes together to celebrate and remember deceased family, friends, and ancestors. Monarchs arriving at the wintering grounds in Mexico this time of year are the “great grandchildren” of the monarchs that began the migration cycle in March of the previous year. Unlike their parents and grandparents that lived for several weeks, the migrating generation will live upwards of nine months as they overwinter in Mexico.

“The Monarch Returns.” by Ryan Conners

Day of the Dead coincides with the Christian holy days, All Hallows Eve, All Saint’s Day, and All Souls days which are celebrated October 31 through November 2. As Catholic traditions and indigenous cultures mixed, monarchs have come to represent the souls of loved ones returning to visit each year.

Autumn is full swing at John Heinz National Wildlife Refuge at Tinicum. While the leaves are changing and the temperatures are cooling, our monarch butterflies are continuing their 3,000 mile journey to Mexico. On their great trek, they will encounter tough storms, ocean winds, cold temperatures and more. This inspiring butterfly has caught the interest of local 4th graders and their teachers at Penrose Elementary and they show how monarchs can be used as an interdisciplinary tool in the classroom!

Moments before the release 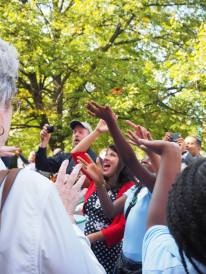 U.S. Fish and Wildlife Service Director Dan Ashe demonstrating how to tag a monarch to students

Earlier this month, we held an event with several partners at Penrose Elementary to designate the Philadelphia Urban Wildlife Refuge Partnership. During the event, each student learned how to tag and release butterflies. Having experienced these beautiful  insects first hand, students at Penrose are incorporating their memorable experience of releasing butterflies into their work assignments for class. The monarch butterfly can be easily adapted to subjects across the curriculum, including Language Arts, Math, Science, Art and Geography.

Students at Penrose have been reading poems and writing essays about monarchs as part of their Language Arts assignments. Below, a student uses details from the poem to reflect on its meaning and how the poem emphasizes the importance of being happy with who they are. Using a personal experience and tying it into language arts can be extremely helpful and allow the students to better relate to conservation and nature. 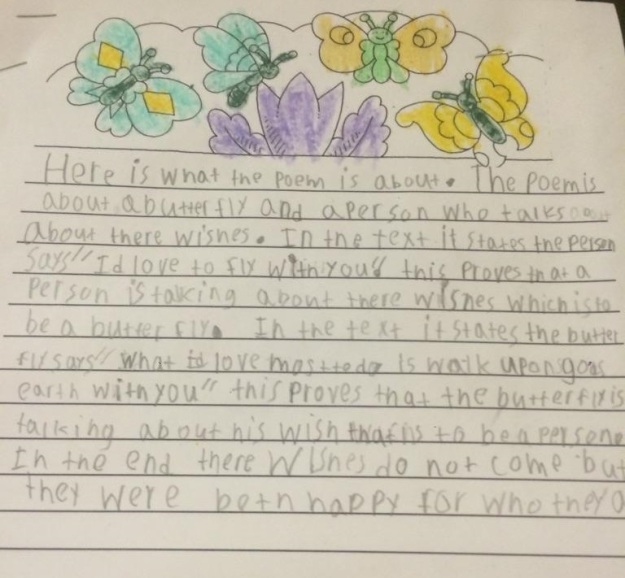 An essay that cites details from the poem and draws conclusions.

Monarch migration can also be adapted into a math or geography lesson. Using map skills and identifying migration routes can help students visualize the United States and the surrounding countries. They can also get an idea of how far away 3,000 miles is and where Mexico is in relation to Philadelphia. Students also used butterflies to solve more complex math equations and as an inspiration for art.

While insects and butterflies are commonly used as a lesson in science, Penrose Elementary students have shown how monarchs can easily be used in other subjects as well. This truly shows how invaluable the story of the monarch is and how it can have a lasting impact on young students.