Hartley looks on while a student examines a tufted titmouse. Credit: Bennett Gould

Asking me what my favorite refuge is for birding isn’t a hard question…  It’s an impossible question!  It’s a bit like asking me which of my children I love the most.  To me, birding is about experiencing the wonder and diversity of nature in its many forms.  I have more refuge birding memories than I can count, many of them uniquely special and irreplaceable. 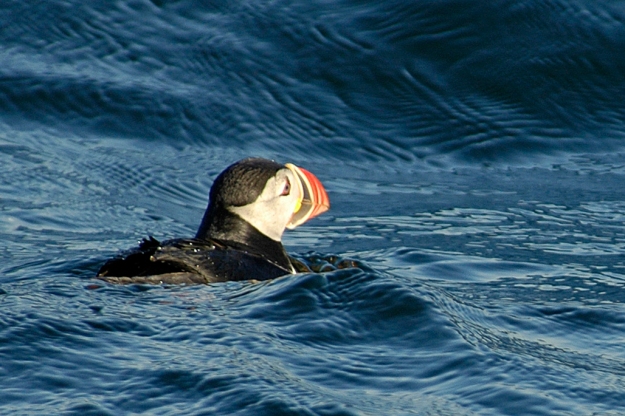 That includes seeing Atlantic Puffins and Razorbills up close on Maine’s Seal Island NWR, hearing–and feeling–the force of hundreds of wingbeats as flocks of shorebirds poured over my head (a Peregrine Falcon in close pursuite) at Montezuma NWR in New York, and waiting patiently to get a great look at one of the more secretive–and rarest–birds on the Atlantic Coast, the tiny Saltmarsh Sparrow, at Parker River NWR in Massachusetts.

I was lucky enough once to visit some of the hundreds of potholes that make up the refuge system’s Wetland Management Districts in North Dakota, surely some of our most productive “refuges” on a per acre basis.  I had more exciting and satisfying duck hunting in a few days there than I had experienced over twenty five years in other states.

The joy of birding is seeing new species, seeing something you haven’t seen in a while, or just getting a great look at something unusual.  I’ll never forget the first rail I saw in the open, walking along the edge of the marsh at New Jersey’s Forsythe NWR.  But it’s nearly as exciting when a Whimbrel lands near you on the Eastern Shore of Virginia, or you get really clear views of a Magnolia Warbler, Bay-breasted Warbler, and Blackburnian Warbler in the same conifer forest at Umbagog NWR in New Hampshire.

Each visit to a refuge is another great chance to have one of these unexpected moments, where I get the thrill of feeling like I am connected directly to nature.  I look forward to those encounters every time I’m birding, whether they involve a relatively common bird or a rarity from far away.

During 20 years as a wildlife biologist I have been lucky enough to spend numerous hours watching and studying birds, both on and off the job. Some of my most memorable bird experiences have been on National Wildlife Refuges across the country. Here are a few of my favorites:

Hakalau National Wildlife Refuge, Big Island of Hawaii: Some of the rarest birds in the world find sanctuary from threats such as avian malaria and habitat loss among the massive native koa and o’hia trees on this jewel of a refuge. One of my favorite birding experiences was at Hakalau while helping to lead public birding tours during a refuge open house. Many species of native forest birds fluttered from tree top to tree top, from the flame orange ‘Akepa, to the long-billed ‘Akiapola’au.  I can’t think of another refuge where you can see so many incredible endemic forest birds in one place.

Don Edwards San Francisco Bay National Wildlife Refuge: Amidst the hustle and bustle of the San Francisco Bay area, this refuge provides critical habitat to a huge variety of waterfowl, shorebirds, and marsh birds…Not to mention bird lovers. In 1996, while a Student Conservation Association Intern at Don Edwards, I lived in a staff trailer only feet away from one of the most beautiful brackish marshes I have ever encountered. Every day after breakfast, I’d grab by binoculars, climb down the steps of my trailer, and stroll the boardwalks of my ‘home’ marsh. I really got to know the birds that lived next to me.  This experience helped solidify my career path.

Credit: TJ Gelhing
Monomoy National Wildlife Refuge: Many miles of ever-changing sands and marshes of Monomoy refuge jut off the ‘elbow’ of Cape Cod and out into the ocean as far as the eye can see. A great number of breeding, migratory, and wintering birds call this spectacular place home. Since 1998 I have had the opportunity to go out to (and even fly over) Monomoy several times to help hard-working Refuge Biologists and other partners study shorebirds and waterbirds, including the listed Piping Plover and Roseate Tern. My times on Monomoy have always been memorable, from watching the sun set over a tidal flat with several hundred foraging Red Knots, to the cacophony of thousands of Common Terns circling above my head.

If you would like to go on a birding adventure at a nearby Refuge, plan your visit on the Northeast Region National Wildlife Refuge System website!

It’s National Wildlife Refuge Week, a week to get out and visit your national wildlife refuges! We would be remiss if we didn’t pause to thank all of the volunteers who make all of the work we do possible.

Each year, thousands of migratory birds stop at Bombay Hook during migration.

Birdwatchers flock to see them.

The 16,000 acre refuge along the coast of Delaware is a birding destination and an important vestige of natural coastal area along the Atlantic coast. Since 1937, the U.S. Fish and Wildlife Service has managed the refuge for migratory birds and waterfowl, and many other animals benefit from this work.