Right now in offices all along the eastern seaboard, shorebird technicians are hunched in front of computer monitors tapping numbers into spreadsheets. A mundane end to six months spent observing life and death on the beach, but an important step to capture what played out during the breeding season.

A piping plover at its nest. Credit: Bill Byrne

“From when the birds arrive in March to when they leave in August, we are checking on them every day, recording progress with eggs and chicks, and tracking predator species, so you can only imagine the amount of data we collect,” explained Emily Heiser, a wildlife biologist with the Conserve Wildlife Foundation (CWF) of New Jersey who assists with running the state’s monitoring program for the federally listed piping plover.

“There is a data sheet for every pair, and a pair might have several failed nest attempts in a season, and there are more than a hundred pairs,” she said. “You do the math.”

I did. It adds up to a lot of data, and until this year, you would have had to triple that amount to capture the total workload for her staff. All of the data that was recorded into notebooks in the field had to be transcribed onto paper datasheets in the office, and then transferred into a spreadsheet at the end of the season.

But no longer in New Jersey. “There is no transcribing. There is no data entry. Now you just collect it in the field and all you have to do is check it at the end of the season to make sure the information accurately reflects what happened,” said Heiser.

That’s because shorebird biologists in the Garden State aren’t using notebooks anymore. They’re using NestStory, an application for their smartphones.

I know what you’re thinking: It’s 2017. What took them so long? Well that’s what Jim Verhagen was thinking too.

A seasonal resident of Long Beach Island, N.J., Verhagen had developed a relationship with staff at CWF over the years based on a shared appreciation for the local bird community. As an avid wildlife photographer, he too spent a lot of time observing birds in the field. But as a computer programmer, he knew he could harness technology to use his time more effectively.

“I made an app for myself for tracking the birds I was sighting — particularly piping plover and peregrine falcon — so I could try to map their exact locations for the purposes of taking better photos,” he explained.

As Verhagen figured out how to use smartphone technology to more accurately track beach nesting birds, he realized that the people who really needed precise information on these species were still doing things the old-fashioned way.

“I was going out in the field with scientists all the time, and they were recording data in such complex ways, all compiled with little notes,” he said. “I was struck by the amount of time that was being wasted, and the potential loss of accuracy.”

He showed his app to a few people in the plover world, but met resistance. “They would say, ‘We tried something like that once. It didn’t work,’ ” Verhagen recalled.

Then he showed it to Michelle Stantial, a PhD student at the State University of New York College of Environmental Science and Forestry (SUNY ESF) who is studying factors that limit reproductive success of the federally listed piping plover in southern New Jersey.

Stantial recognized the potential immediately. She coordinates data collection at nine study sites in the state in collaboration with a number of different organizations.

The application provides a common format for collecting data, a central repository for storing it, and a platform for communicating with others who are doing the same thing.

It’s also fun. “The main concept is that you run ‘missions’ at certain site, on a certain date, with a certain number of other people,” said Verhagen. Say you are on a mission at Barnegat Light, the app will automatically record the weather data and the tidal stage, and then open a checklist of required activities that you must complete — essentially nest checks.

“You are either looking for new nests or checking on old ones,” said Verhagen. “At each one, you enter how many eggs you see, how many chicks you see, and whether or not you see an adult female, an adult male, or an unknown adult.” 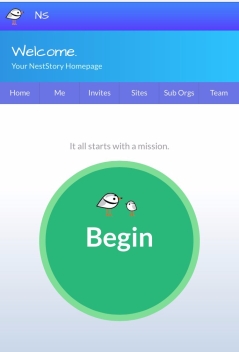 A screenshot from the NestStory app.

That’s all you have to do, but there are many other things you can do, such as take photos or record notes. You can even request to have a custom module — or questionnaire — added to the app a part of your team’s mission. For example, if you want to everyone to record certain information about predators or human activities.

But NestStory’s biggest selling point is that it was built with input from its target audience: biologists. Verhagen worked closely with Stantial to make sure the app would be practical for data collection in the field, and would also support the application of that data for management needs. NestStory outputs data to U.S. Geological Survey standards, and can feed data directly into another new tool called PiperEX, designed to help managers decide when to use a nest exclosure.

Stantial tested the app for her own data collection in 2016, and then presented it to her peers at the annual piping plover conference in the fall. This year, both SUNY ESF and the CWF agreed to pilot NestStory for their entire piping plover data collection efforts in New Jersey, including at the Edwin B. Forsythe National Wildlife Refuge.

“It might not seem like it because using notebooks and paper is common practice, but this is a really huge step into the future of data collection,” said Stantial.

Just ask Todd Pover, a Senior Biologist at CWF who oversees the field crew contracted by the Service to manage piping plover at Forsythe, home to one third of the state’s plover population. “This was my 24th season monitoring piping plovers, all of the previous ones done with notebooks and paper data sheets,” he said. “Change is always hard at first, but with NestStory, even after some initial bumps when we tested it, there was universal consensus among our Refuge field crew that this was a very good thing. I can’t imagine going back to the old way now.”

“It has transformed the way we collect data in the field,” said Heiser. “At the end of this season, instead of having to put data into spreadsheets, we are putting it into reports, and it doesn’t require someone spending hours on the computer.”