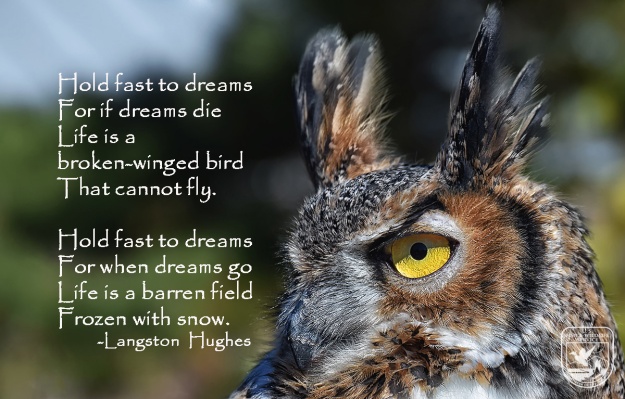 April 2016 marks the 20th anniversary of  #National Poetry Month.  Our Wednesday Wisdom features poet Langston Hughes, an American poet, novelist, and playwright whose African-American themes made him a primary contributor to the Harlem Renaissance of the 1920s.  His poem, “Dreams,” compliments the image of Galileo, the great horned owl, who lives at the York Center for Wildlife in Cape Neddick, ME.  Since his injury and rehabilitation he is now an ambassador for owl and raptor education for area children and adults.  Galileo can no longer fly but he is part of an organization whose mission and dream is to provide medical services, safe sanctuary and humane treatment for sick, injured and orphaned wildlife until they can be released back into the wild.  Our National Wildlife Refuges often partner with local wildlife rehab facilities for outreach and up close wildlife viewing and study.

This pine warbler at John Heinz National Wildlife Refuge in Philadelphia, Pennsylvania will return come Spring to the open pine forests of the Northeast from their wintering grounds in southern Florida and from even further south into Mexico.

This time of year the days are a little shorter and the nights a little longer. There is still beauty all around, don’t forget to stop and take it in.