Three years ago this week, Hurricane Sandy devastated communities along the Atlantic Coast with record storm surge, fierce winds and torrential rain. Earlier this month Hurricane Joaquin again reminded us of nature’s power, inundating much of the Atlantic Seaboard with heavy rains and chest-deep floodwaters and setting historic records in the Carolinas. And only days ago, Hurricane Patricia — the most powerful tropical cyclone ever measured in the Western Hemisphere with maximum sustained winds of 200 m.p.h. — threatened the coast of Mexico before weakening significantly after landfall.

Visit doi.gov/hurricanesandy to learn more about how Department of the Interior investments are helping to build a stronger Atlantic Coast three years after Hurricane Sandy.

In this age of uncertainty we have come to expect the unexpected. The science tells us that climate change will cause hurricanes and tropical storms to become more intense — lasting longer, unleashing stronger winds, and causing more damage to coastal ecosystems and communities. The question is, what can we do to help coastal areas stand stronger against the storm?

Federal funding for Hurricane Sandy recovery has spurred an unprecedented effort to strengthen natural defenses along the Atlantic Coast to protect communities and wildlife against future storms. The U.S. Fish and Wildlife Service and other Department of the Interior agencies are investing $787 million in hundreds of projects to clean up and repair damaged refuges and parks; restore coastal marshes, wetlands and shoreline; connect and open waterways to improve flood control; and increase our scientific understanding of how these natural areas are changing.

The Service is investing $167 million in more than 70 projects to clean up refuges, restore and strengthen coastal areas (marshes and beaches), connect and open waterways for better fish passage and flood protection and support other efforts to protect wildlife and communities from future storms. These investments support the goal of President Obama’s Climate Action Plan to make communities more resilient to increasingly intense storms predicted with a changing climate. They also create jobs and provide opportunities for fishing, hiking, wildlife watching and other recreational opportunities. Here are a few projects that have been completed or are under way: 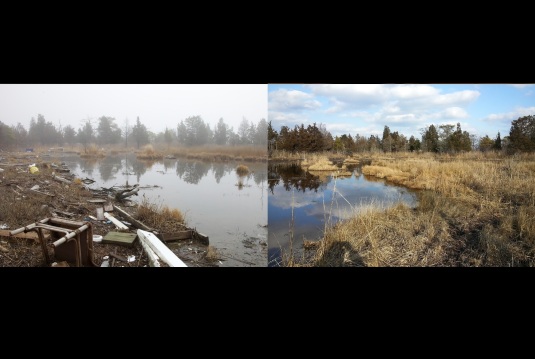 Post-Hurricane Sandy debris removal from the coastal marshes of Edwin B Forsythe National Wildlife Refuge in southern New Jersey, made possible through Department of the Interior funding. Credit: (before) Ryan Hagerty/USFWS, (after) Virginia Rettig/USFWS

Learn more about the Fog Point living shoreline project in this video.

Three years after Hurricane Sandy, communities, government and nonprofit organizations are working together like never before to better understand and adapt to changing conditions. Clearly it will take time and careful planning before we see a return on many of these investments. But the Service is confident the long-term benefits of building a stronger coast will far outweigh initial costs when it comes to protecting communities, sustaining wildlife and lessening the financial impact of damages resulting from future intense storms. To that end, we are establishing systems to carefully monitor and evaluate our progress to ensure this work is effective and lasting. The nature we care about and the public we serve deserve no less.

You can track the status of our projects and investments by visiting the Fish and Wildlife Service’s Hurricane Sandy website at www.fws.gov/hurricane/sandy/

Situated on the Jeremy River in Colchester, Conn., Norton Paper Mill is attached to one of several dams set for demolition. The mill building could be written into the pages of a Stephen King novel: fires and neglect have gutted much of the interior; the dilapidated roof is beyond repair; and surges of water shoot from cracks in the building’s foundation, becoming vertical geysers.

U.S. Fish and Wildlife Service biologist Georgia Basso, who is working with the Service’s Coastal Program to assess the removal of Pond Lily dam in Connecticut, says in the event of a big storm like Sandy, an obsolete structure like the Norton Mill dam could easily collapse, cause major flooding and create numerous threats for both wildlife and people.

“Connecticut River native fish—such as alewife, blueback herring and Atlantic salmon—don’t have access to their spawning grounds because of these dams.” – Georgia Basso, Service biologist 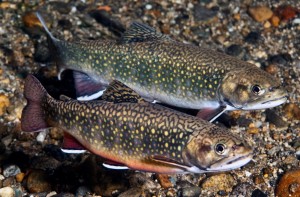 The Eastern Brook trout is one of several species of fish that will be free to move throughout the Jeremy River in Conn. – once Norton Mill dam is removed. Credit: Robert S. Michelson of Photography By Michelson, Inc Brook trout

Bolstered by nearly $102 million in federal funding for Hurricane Sandy recovery, the Service is working with partners to strengthen natural defenses that can help protect Atlantic Coast communities against future storms. Part of that strategy includes removing or evaluating 13 dams in 14 states. Nearly $7 million alone is being invested for on-the-ground conservation projects in Connecticut. These include five dam removal projects designed to create healthy habitats for fish and other wildlife, as well as reduce the risk of flooding to communities. 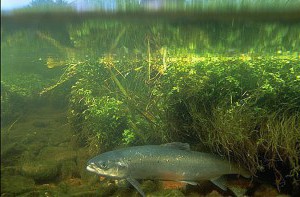 Signs of restoration could be immediate instream – according to Service biologist Phil Herzig – once demolition is complete. Fish could be migrating within in a day or two. Atlantic salmon photo credit: USFWS

Service fisheries biologist Phil Herzig leads Sandy-funded dam removal projects for Norton Mill and Flock Process dams in Connecticut. According to Herzig, once a dam breaks, tons of built up water and sediment would be released into the surrounding areas. The damage and flooding caused could be monumental.

Herzig says removing dams allows rivers to behave like rivers and gives fish an opportunity to live out their natural life cycle.

“Rivers tend to self-regulate if they’re healthy,” he says. “The benefit for fish and wildlife would be passage. Terrestrials as well as aquatics can move up and down without impediment.”   The result is a win- win investment to protect communities and help fish and wildlife.

During the summer of 2014, interns at Edwin B. Forsythe National Wildlife Refuge in New Jersey focused on monitoring piping plover and other beach nesting birds, as well as conducting salt marsh inventories and forest surveys.  Along the way, interns also banded Canada geese, wood ducks, salt marsh sparrows and ospreys, collected tiger beetles, and entered and proofed lots of data!  Much of the data collected by interns this summer will serve as a baseline for evaluating Hurricane Sandy resilience restoration and enhancement work that will begin next year.  The accompanying video was put together by the 2014 intern staff to document this work. Enjoy!