The rusty blackbird, a close relative to the grackle, is one of North America’s most rapidly declining species.

If you look carefully into the wooded swamps and woodlands of a boreal forest of our northern states, you may catch a glimpse of one, distinct in appearance from other blackbirds with its rusty featheredges and pale yellow eyes. Rusty blackbirds can also be spotted in our region into late summer and fall as they migrate from these breeding grounds towards their wintering areas in the southern U.S.

Once common, populations have dropped 85 to 95 percent in the last 40 years. The cause of the dramatic decline in numbers is unclear. While extensive loss of wooded forests and wetlands to agriculture on their wintering grounds is a likely factor, the principle cause is unknown. Scientists hypothesize that there is a “perfect storm” of factors that also includes:

The International Rusty Blackbird Working Group believed that the mystery of the rusty blackbird decline and its large range made it a perfect candidate for a citizen science project. Thus, the Rusty Blackbird Spring Migration Blitz from early March through mid June this year. 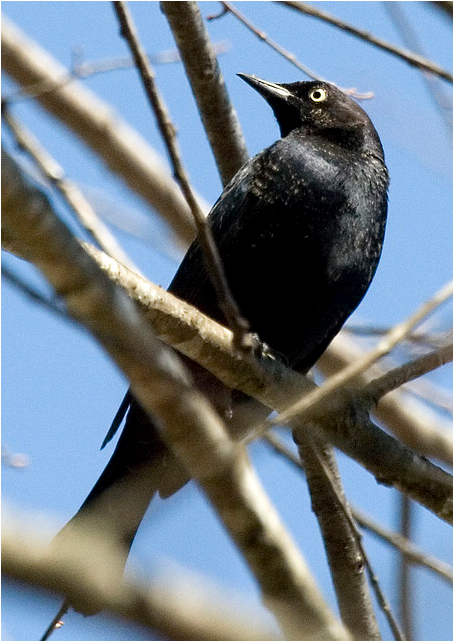 “The Migration Blitz will provide new information on migration timing and migratory hot spots that will help us focus conservation efforts for this species where and when they will have the greatest impact.” says Randy Dettmers, one of our biologists studying the bird’s behavior.

Birders from 38 U.S. states, 9 Canadian provinces and 3 Canadian territories tracked these elusive songbirds on their northward migration from the southeastern U.S. up through Canada and into Alaska. Presence or absence information is entered into the Cornell lab of Ornithology eBird site, and scientists will use the data from the Blitz to target future conservation efforts and research initiatives.

During the first full month of the Blitz, birders submitted 6,281 checklists into eBird that included location information of rusty blackbirds–a 41 percent increase from 2013. These data provide much more than the typical snapshot of a single location; it’s like a collective collage that shows a much fuller picture. While the final tallies are still coming in, if the upward trend of submitted information continues, there will be a wealth of knowledge for scientists to sort through.

The Blitz presented a unique opportunity for citizens to both get outside and enjoy nature in the spring, and to actively participate in an effort that sets a new precedent for conservation.

“The Blitz focuses on rusties, but it also demonstrates the power and potential for leveraging citizen science for conservation,” noted Blitz coordinator Judith Scarl of the Vermont Center for Ecostudies.

Even though the rusties have already passed through many of our region’s states, there’s some fascinating birding to be done this month. Check out these tips from eBird!

In recent years, the population of rusty blackbirds has fallen off a cliff—biologists estimate current numbers are 85-90 percent lower than 40 years ago. As if that’s not bad enough, there’s another problem: scientists have no idea why. Some speculate it might be a “perfect storm” type of situation, where a number of factors are rapidly reducing the bird’s numbers.

We actually know surprisingly little about this species, among the most rapidly declining in North America. So, we’re staging a call to action: the Rusty Blackbird Spring Migration Blitz!

If you’re a citizen scientist or a birder, we’re asking you to record sightings of rusties in eBird, the Cornell Lab of Ornithology’s excellent tool for gathering and interpreting bird data. With your help, scientists are able to compile data regarding bird sightings and analyze the migratory patterns of rusties, in order to figure out what’s causing their precipitous decline.

“The Rusty Blackbird Spring Migration Blitz is an exciting endeavor of the International Rusty Blackbird Working Group,” says Randy Dettmers, a Service biologist studying the bird’s behavior. “The Migration Blitz will provide new information on migration timing and migratory hot spots that will help us focus conservation efforts for this species where and when they will have the greatest impact.”

Any observation is useful—even if you couldn’t find a rusty during your state’s observation period, that information is valuable to biologists as it tells them where the rusties aren’t.

“With about half of the rusty blackbird total population estimated to breed in Quebec and Newfoundland, the Northeast plays a critical role in supporting this species during its migratory periods,” says Dettmers. 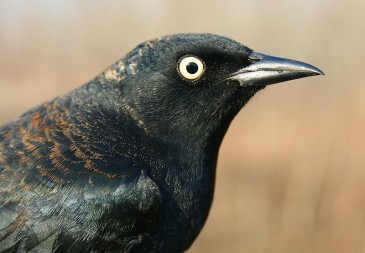 Make sure you’re looking at a rusty, and not another more common species, like Brewer’s blackbirds. Male rusties are black with rusty-tipped feathers, and females are gray with some rusty shades. Check out this identification guide!

Cooperation is essential to bringing important changes to the world, and here’s one way we can all contribute. So let’s get out there and get to work, together we can bring this species back from the brink! 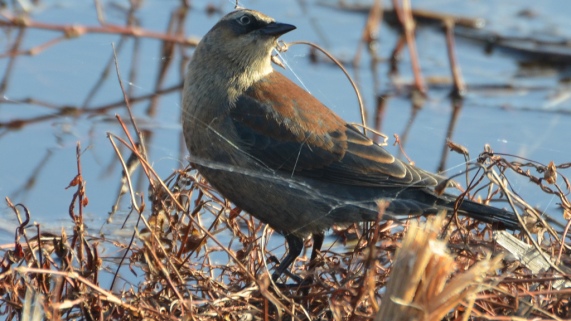