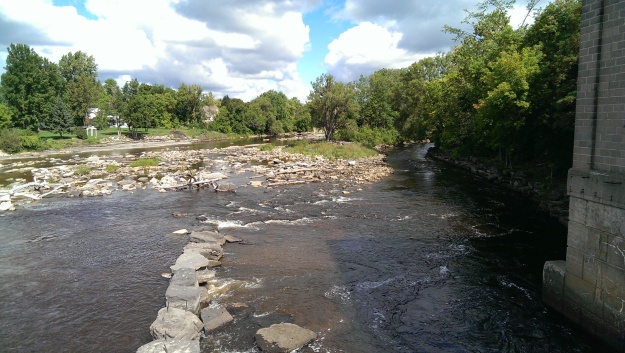 Check out the rapid changes to the St. Regis River even after just removing the west side of Hogansburg Hydroelectric Dam. More like a river, less like a lake! Photo courtesy of Tony David. 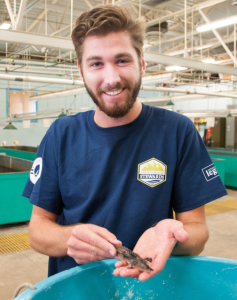 Today you’re hearing from Justin Dalaba, our new outreach coordinator for the New York Field Office. He graduated this summer from St. Lawrence University with a bachelor of science in conservation biology. Welcome Justin!

Near the mouth of the St. Regis River in Franklin County, New York, are the final remnants of the Hogansburg Hydroelectric Dam.

The 330-foot-long dam blocked migrating fish and hindered a way of life for over 85 years. The dam neighbors the Saint Regis Mohawk reservation, also known as Akwesasne, and is part of the Tribe’s decades old boundary claim. Talk among stakeholders about decommissioning the Hogansburg Hydroelectric Project, owned by Brookfield Renewable Energy, began in the early stages of Federal Energy Regulatory Commission, aka FERC, relicensing nearly five years ago.

Here’s what you should know:

Stephen Patch, senior fish & wildlife biologist at the New York Field Office, stands among the final remnants of the Hogansburg Dam. Steve has been an integral part of the dam removal. Credit: Anne Secord, USFWS.