Who doesn’t like a pat on the back for a job well done? Today, we’re sharing our excitement to be part of a partnership that’s received a prestigious environmental award for work on the Musconetcong River in northwest New Jersey. The award comes from Coastal America, which recognizes outstanding collaborative projects and excellence in leadership for protecting, preserving and restoring the nation’s coastal resources. Four partnerships were picked this year from across the U.S. Read today’s news release.

The Musconetcong River Restoration Partnership has restored 3.4 miles connecting the Musconetcong to the Delaware River. In 2011, the partnership completed removal of Finesville and Riegelsville dams, the first two obstructions upstream of where the river meets the Delaware River. Many of the members of the partnership also worked together to remove the Gruendyke and Seber dams further upstream.

The dam removals along the 42-mile Musconetcong, also called the Musky, have restored natural stream flows, opened the way for migratory fish including American eels, alewife and blueback herring, and improved habitat for trout, bass and other local fish populations. Additionally, the projects alleviated some flooding by restoring the natural flood protection features of the riverside wetlands.

Where are we today?

A man-made dam continuously harnessed the Musconetcong River at Finesville for more than 250 years, influencing the settlement of the region and providing visitors and residents of this northwest New Jersey village with a connection to its industrial origins powered by the teeming water of the river.

Like all of the dams on the 43-mile Musconetcong, also known as the Musky, the dam in Finesville had become obsolete. It wasn’t running a mill, contributed to flooding, kept water too warm for coldwater species like trout, degraded water quality, attracted invasive plants and nuisance species and was dangerous for swimmers and kayakers.

So in 2011, this 9-foot high, 109-foot long concrete dam became the fourth dam to be removed on the Musky, with several more proposed projects on the way.

The public process of dam removals isn’t simple – research, assessments, engineering and public meetings – but the return is worth it.

“Dam removals bring change and sometimes people need time to get used to the changes,” said Beth Styler Barry, executive director of the Musconetcong Watershed Association. “But in the end, people will be happy with the results. It will be different, but beautiful.”

Text from the Musconetcong Watershed Association.

An after photo at the former Finesville dam site. Credit: Eric Schrading/USFWS

Box turtle off the shore of the Musconetcong River. Credit: John Czifra

An example of the extensive survey and planning efforts leading up to the removal. Credit: Musconetcong Watershed Association

Today you’re hearing from Eric Schrading, private lands coordinator in our New Jersey Field Office, as part of our series on fish passage.

The expense of owning a dam can be quite surprising to a landowner. Dr. Calvin Shen owned a 220 acre farm on Pohatcong Creek in central New Jersey, and on that creek was an earthen dam.

In late 2008, Dr. Shen realized the unreasonable costs of maintaining that 80-year-old Class 2 dam. That’s when he reached out to the U.S. Fish and Wildlife Service to explore ways to breach the dam and restore the Pohatcong Creek.

The dam—Willever Lake dam—was built in Mansfield Township in the early 1900s. It was a “run-of-the-river” style dam probably for recreation and for irrigation water for local farms. Downstream of the dam, forested wetlands handle floodwater and agricultural lands support crops. The Pohatcong Creek itself is known for its high water quality and its trout production. Not to mention, the Pohatcong Creek runs directly into the well-known Delaware River.

The Service visited the dam several times, bringing potential partners with interest in dam removal and restoration of the river’s banks and nearby land. The Natural Resources Conservation Service quickly became a significant partner, assisting through several Farm Bill programs.

Ultimately, we came up with an ambitious plan to:

Dr. Shen was happy to see permits in hand and work begin.

“I began the Willever Lake dam breach for public safety reasons—a road crossed the dam and was in bad condition—but learned a lot about the negative biological impact the dam had on the Pohatcong Creek,” Dr. Shen said.

“In the course of the breach, I met some impressive, dedicated people at the U.S. Fish and Wildlife, NRCS, Trout Unlimited and the New Jersey Audubon Society who helped the project with time, money and energy. I feel the success of the project was primarily due to the collaboration of all these interested parties.”

Most construction work was funded by NRCS, the Service and Dr. Shen. But money only got us so far.

We needed to plant willows, dogwoods, and a variety of riverside vegetation in the newly created creek and floodplain. And it got done, thanks to donations from Pinelands Nursery and hard effort and sweat from New Jersey Audubon Society, Trout Unlimited, students from Warren County Community College, and employees from NRCS and the Service. 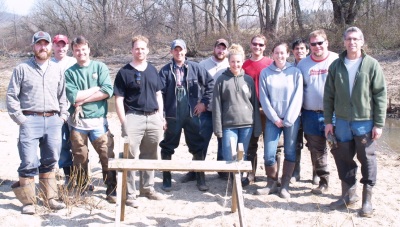 Both pictures are of planting crews. Credit: Eric Schrading/USFWS

We finished most of the work and are now monitoring the response of wildlife. The project reconnected 2 miles of the Pohatcong Creek for native fish and restoration of over 25 acres of forested wetlands.

Though that may not seem like much, it’s a lot for the thousands of frog and toad tadpoles, the solitary sandpipers and the killdeer that we’ve already seen—not to mention the future nesting for wood duck, a variety of warblers, woodcock, and flycatchers.

Now we just wait, and let the plants grow.

This is part of a series on fish passage. Read the other blog posts here.