Marcia is the project leader at the Chesapeake Marshlands National Wildlife Refuge Complex in Maryland.  Marcia brings a wealth of knowledge from her diverse experiences with us and other conservation agencies. Learn more about Marcia and her goals for managing the refuges that comprise the Complex: Blackwater, Eastern Neck, Glenn L. Martin and Susquehanna National Wildlife Refuges.

What is your professional background and experience with the Service?

I joined the FWS Division of Migratory Bird Management in DC where I oversaw our national efforts to partner for bird conservation and was later Deputy Division Chief.  I then became the Division Chief for Visitor Services and Communications for the refuge system for over four years.  Working on “the people side of things” with all the Regions and refuges has been very rewarding.

What are some of your goals as a new project leader for the Chesapeake Marshlands NWR Complex?

Our biggest threats include sea level rise and invasive species.  An important goal is dealing with marsh loss, and focusing our land protection within the Nanticoke Division and future areas for marsh migration.  Other goals include continuing to manage for migrating and overwintering waterfowl, as well as beginning to monitor and manage for the Northern long-eared bat after discovering the first ever on the Eastern Shore of Maryland a month ago.

We had over 200,000 visitors to the Complex last year, and this will grow with the opening next March of the new Harriett Tubman National Park and State Park adjacent to us. The landscape that shaped Harriett Tubman is intact today thanks to Blackwater NWR. We will also focus on opportunities to engage both new and regular visitors including hunting, birding, paddling and wildlife viewing, to name a few.

How is Chesapeake Marshlands preparing for the dramatic loss of wetlands due to sea level rise and the degradation of marshlands due to the nutria population?

Blackwater NWR has lost over 5,000 acres of marsh since established in 1933.  Our approach is facilitating adaptation and resiliency through partnerships.  We partnered with APHIS Wildlife Services to eradicate the invasive nutria, with great success.  We also partnered with The Conservation Fund and Audubon Maryland-DC to develop a comprehensive sea level rise adaptation plan.  We are facilitating marsh migration into what is now upland habitat through controlling phragmites and focusing our land protection efforts where future wetlands will be.  We are also building resiliency into our marshes through living shorelines, restorations, and marsh thin-layering.

What do you believe is your greatest accomplishment with the FWS?

A highlight was spearheading the Urban Wildlife Conservation Program with the “Conserving the Future” vision team.  The primary goal is to engage new audiences in conservation. The Service’s mission ends with “for the continuing benefit of the American people.”  If people enjoy and care about wildlife, and realize how it benefits them, they will support conservation. This is a common goal now shared by the States, NGOs, and other countries.

Marcia would like you all to know more about these resources:

Planning for marsh migration at the Blackwater National Wildlife Refuge

Blackwater 2100: A strategy for salt marsh persistence in an era of climate change, 2013

In honor of International Migratory Bird Day May 9, we’re sharing #ScienceWoman profiles of biologists who are helping us save our feathered friends! Our #ScienceWoman campaign honors women across the U.S. Fish and Wildlife Service who are making history in our agency and in conservation. With each #ScienceWoman, we share a photo and a couple questions and answers about her work. Stay tuned for more posts later this week.

Meet #ScienceWoman Pam Loring, a Pathways Intern in our Division of Migratory Birds.

Q. What’s your favorite thing about working for the U.S. Fish and Wildlife Service? A. Having the opportunity to work with so many talented biologists and managers, on many different and important projects, including bird movement studies, AMAPPS surveys, waterfowl surveys, the shorebird plan, etc.

Q. What’s your favorite species and why? Common and roseate terns – they are just stunning to observe in the field and their various life history strategies never cease to amaze!

The northeastern population of the roseate tern is listed as endangered. Credit: Sarah Nystrom/USFWS 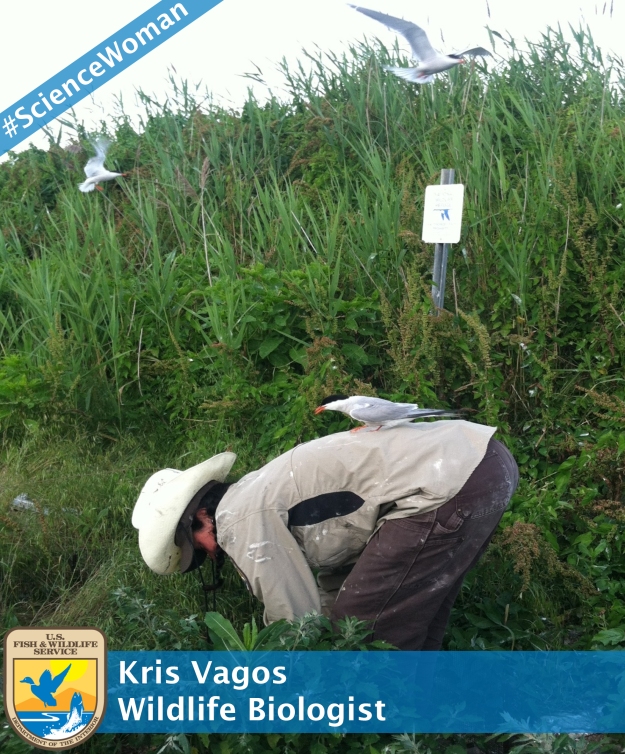 In honor of International Migratory Bird Day May 9, we’re sharing #ScienceWoman profiles of biologists who are helping us save our feathered friends! Our #ScienceWoman campaign honors women across the U.S. Fish and Wildlife Service who are making history in our agency and in conservation. With each #ScienceWoman, we share a photo and a couple questions and answers about her work. Stay tuned for more posts later this week.

Kris went to Boston College for undergrad, where she studied biology and environmental science. She then went on to complete her Master’s Degree in natural resources at the University of New Hampshire. 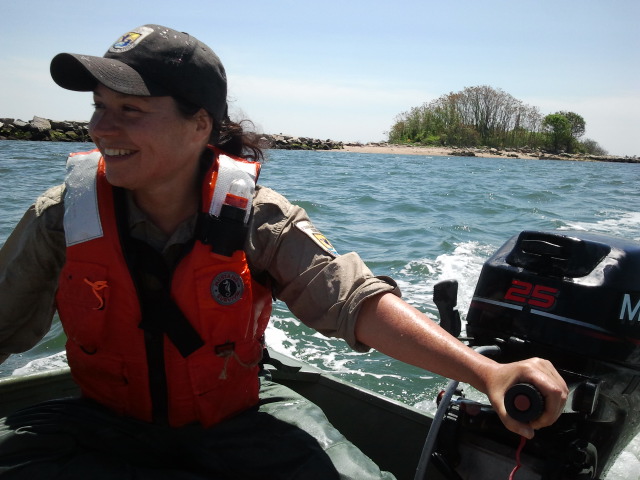 Kris driving a boat after putting up symbolic fencing for least tern on Menunketesuck Island in Long Island Sound.

Q. How did you get interested in conservation? A. I worked as a Habitat Restoration Intern with the National Park Service in San Francisco. They were turning old Army dumps into coastal dune ecosystems and parking lots into working salt marshes. It was amazing – I wanted to do that.

Q. If you could have one incredible animal adaptation, what would it be? A. Shapeshifting camouflage.