Marlon Errol Hariram was caught coming in to New York from Guyana with the sleeves of his shirt hiding finches hidden in these toilet paper tubes. Click here for another photo of the tubes. Credit: USFWS

Where are we today?

If asked to name reasons someone might smuggle birds into the country, chances are you wouldn’t think first of finch singing contests.

For the Guyanese population in New York, N.Y., however, these contests are a cultural tradition, and many competitors believe the best feathered singing virtuosos must be brought in from Guyana.

Finch contests are similar to horse races. As a bird out-competes its opponents, it becomes more valuable. Its owner plays for bragging rights and money, and the stakes can become high. Finches that have proven their worth in competition can fetch in excess of $5,000. 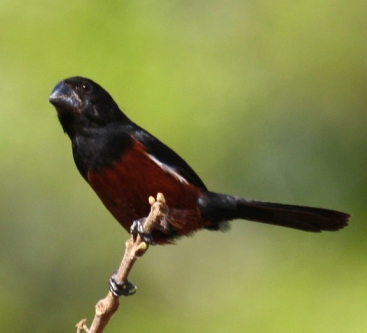 A New York City man was sentenced recently in federal court for smuggling finches into the United States. A year ago, Marlon Errol Hariram was caught when he arrived on a flight from Guyana at John F. Kennedy International Airport with nine finches hidden in toilet paper tubes stuffed into the sleeves of his shirt. A repeat offender, Hariram has been caught three times in the U.S. and once in Guyana with hidden finches.

Under the federal Lacey Act, it is unlawful for any person to import into the U.S. any wildlife taken, possessed, transported, or sold in violation of any law or regulation of any foreign government. The Lacey Act is the oldest wildlife protection statute in the country and is used as a tool to combat the illegal trafficking of live wild animals and wildlife products.

On April 16, 2013, Hariram was sentenced in federal court in the Eastern District of New York to six months in prison followed by two years of supervised release, as well as a $2,000 fine. Hariram pled guilty in October 2012 to three felony charges stemming from his May 2012 finch smuggling attempt. Charges included violation of the Lacey Act, smuggling and making a material false statement.