It’s still winter in the Northeast Kingdom of Vermont, and with three feet of snow on the ground, the only way to get around the Nulhegan Basin division of the Silvio O. Conte National Wildlife Refuge is on snowmobile.

In the basin, winter temperatures sometimes fall to -30 degrees, but for dedicated refuge biologists it’s just another chilly day at work.

This past February, two interns (myself included) from the U.S. Fish and Wildlife Service’s Northeast Regional Office in Hadley, Massachusetts, bundled up and headed north to brave the weather and experience the remote refuge life for a week.

From the rear passenger seat of the zooming snowmobile, half enthralled, half terrified (I was, at least), we saw the expanses of the refuge, covering many miles in a single day.

Stretching over 26,000 acres, the refuge is open for the public to explore during all seasons, either on foot or via a network of groomed snowmobile trails that act as a backwoods highway of sorts.

Through stunning spruce-fir forests we caught glimpses of red squirrels, ruffed grouse, moose and even a lone bobcat as it bounded across the trail in front of our snowmobiles.

At the very southern periphery of the boreal forest, the Nulhegan basin is home to species found nowhere else in Vermont except within these dense northern forests that stretch to meet Canada.

Species like the boreal chickadee, spruce grouse, and even the elusive Canada lynx are sustained by the thick conifers and pristine wetlands that define the boreal forest.

Only one lynx has been confirmed in Vermont since 2014, though the nation’s largest population of lynx resides in the state of Maine. That lone Vermont lynx made its home in the Nulhegan basin.

One of the best ways to identify Canada lynx, especially when compared to similar looking species like the bobcat, is by taking a look at its hind legs and paws. Canada lynx have distinctly long back legs.

In the frigid north, these long back legs and wide feet allow both species to navigate through deep snow and hunt (or run away) more efficiently.

Here on the refuge, we followed UMass Amherst PhD student Alexej Siren as he tracked snowshoe hare using radio telemetry and camera traps that take photos when they are triggered by movement.

Earlier in the year, Alexej and his team fitted snowshoe hares with radio collars so that they could track the signal that the collars emit, detecting the location of the animal and gauging how the population is doing.

Not only did we get to see the incredible work being done by Service biologists and state and university partners every day on the refuge, we got to learn a thing or two about how to identify different wildlife tracks.

And at the end of a long winter’s day, who wouldn’t want this view from their office?

Winter has arrived in the Northeast and snow is in the forecast. While we are piling on the cozy layers and feasting on soup and hot chocolate, outside temperatures are dropping and food for wildlife is getting scarce. Animals across the region are tackling the season head-on and have some impressive strategies to cope with winter conditions. 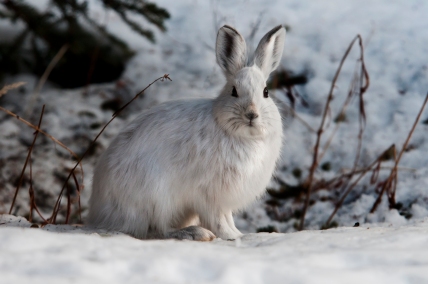 In the winter, snowshoe hares completely transform, their fur changing from brown to white for better camouflage in the snow. They spend their time eating and hiding which helps to conserve energy for their encounters with predators, such as the lynx. Further south, the New England cottontail uses its brown coat to blend into thick underbrush, and uses snow as a ladder to reach higher shoots, seedlings and twigs.

A snapping turtle peeks out of the water. 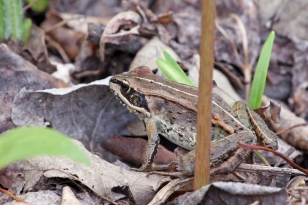 Have you ever wondered where amphibians and reptiles go in the winter? Most frogs, turtles, and snakes dramatically decrease their activity and enter a state of brumation, or dormancy, where their temperature drops and the heart rate slows down dramatically. Many turtles will bury themselves in mud at the bottom of a pond and absorb oxygen through their skin from the surrounding water. Wood frogs are even capable of freezing solid under leaves in forested areas. They are able to do this by filling their cells with a sugary substance that acts like antifreeze. The frog’s heartbeat stops and stays dormant all winter until they thaw again in spring! 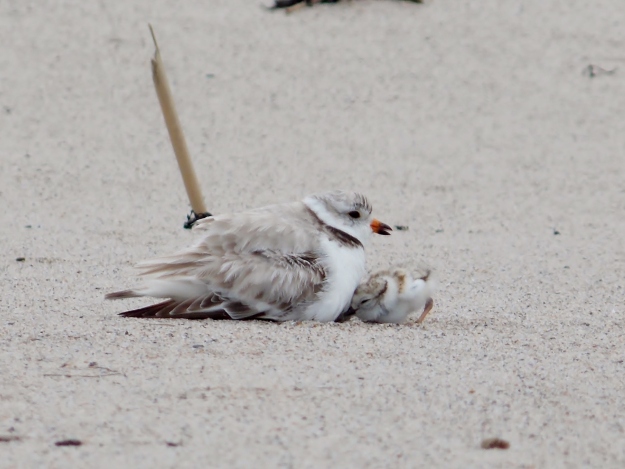 A piping plover and chick by Kaiti Titherington/USFWS

For many birds, the cold is just too much to bear. Like many of us in the winter, migrating birds including the piping plover, leave their homes on the chilly northern coast and take a vacation down south to the warmer shorelines and sandy beaches. Most piping plover are already in their vacation nests by mid-September and come back to work (and mate) by mid-April. Bird migrations vary in length, but some range from hundreds to thousands of miles each year.

An American black bear in a tree. Photo by Courtney Celley/USFWS

If long distance migration isn’t your thing, why not just sleep through winter like the American black bear? Bears aren’t true hibernators, but they can doze for up to 100 days at a time by slowing their metabolism and dropping their core temperature. Bears usually put on fifteen pounds a week during the fall to prepare for their long nap and stretch without food.

As Andrew King took this shot, an Indiana bat flew beneath a large hibernating cluster of Indiana bats on the ceiling of Ray’s Cave, IN (taken pre-white nose syndrome.)

The Indiana bat, a true hibernator, accumulates layers of fat and spends months tucked away in its hibernaculum, like a cave or mine. Throughout winter, bats periodically rouse to move between hibernacula, before their heart rate and body temperature is dramatically lowered to conserve energy. Sadly, white-nose syndrome is plaguing bat hibernacula and causing populations of bats to plummet. Learn more about white-nose syndrome here. 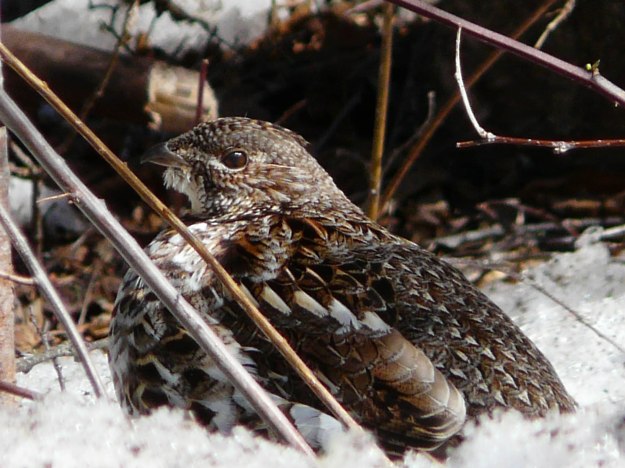 Ruffed grouse are non-migratory birds. They stick out the winters in their usual homes in a protected thicket or burrowed in the snow.  In the late fall, feathers begin to grow on their legs to protect from the cold and help conserve body heat. Pectinations (fleshy comb-like projections along their toes) help them walk on soft snow, roost and burrow. Down feathers allow birds to trap air against their body to stay warm, and many birds will even cuddle together to keep warm. 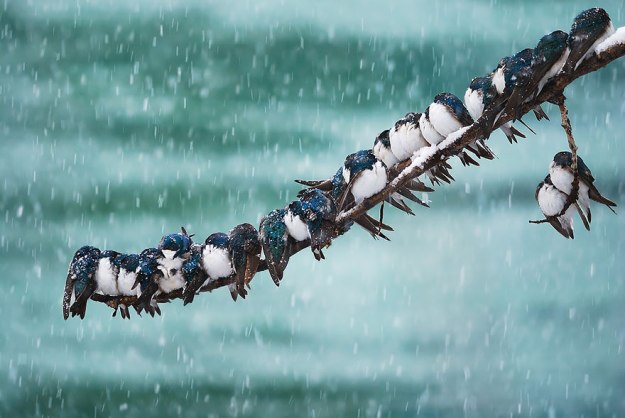 We can learn a thing or two from wildlife this winter. Cuddling, sleeping, or vacationing through winter doesn’t sound half bad, especially if you’re not a fan of winter weather!