Celebrating  National Volunteer Week on this Wednesday Wisdom day with an inspirational quote from American educator and author Helen Keller, who overcame her physical challenges  to become a supremely effective ambassador for disabled persons worldwide. Her life was dedicated to helping others and she understood the necessity to combine forces with others to reach a common goal.  Her amazing vision as a humanitarian to help other’s with disabilities was the seed to build sustainable communities to weather inequality and prejudice.

Witness the crew of FWS staff and volunteers  restoring tidal marsh pre-Hurricane Sandy at Edwin B. Forsythe National Wildlife Refuge (NJ) in June 2012.   Is it possible that their work made some  difference in how this habitat was impacted when four months later – October 29, 2012 – Hurricane Sandy made landfall in NJ and battered the East Coast?  Now in 2016, teams of FWS staff, partner organizations and volunteers continue to work tirelessly to restore coastline and marshlands habitats to brace for any future storm incidents or climate change-related sea level rise.  #StrongAfterSandy

The aerial view of an Atlantic coast saltmarsh depicts an intricate labyrinth of marshland grass and sediment. From 20,000 feet the marsh appears static, unchanging. Yet at ground level, there is an evolving struggle for survival that happens twice a day during high tide.

In a recent PBS documentary episode “Animal Homes: Location, Location, Location,” the drama plays out as a female saltmarsh sparrow is shown strategically weaving her nest into the top layer of marsh grass. Her goal is to build her nest high enough to protect offspring from the danger of high tide. But the combined forces of climate change, rising sea levels and increased storm intensity have caused nest flooding to become a very real threat. Hatchlings are unable to climb out of the nest until they are about five days old, according to Chris Elphick, a U.S. Fish and Wildlife Service partner and Associate Professor of Ecology and Evolutionary Biology at University of Connecticut. So many may not survive to see low tide or their mother’s return to the nest.

From Maine down to Virginia, salt marshes provide a home to species like the saltmarsh and seaside sparrow and act as a buffer to counter the effects of sea-level rise and storm surge. In Hurricane Sandy’s wake, many of these coastal areas have deteriorated, leaving both wildlife and people more vulnerable to the forces of future storms. 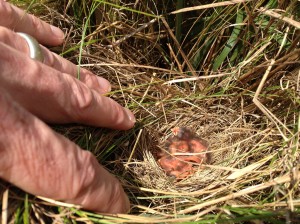 Three projects included in a larger research study, A Stronger Coast, are supported through federal funding for Hurricane Sandy recovery and work together to pinpoint coastal refuge lands’ strengths and weaknesses along more than 70 miles of shoreline. A portion of these efforts will also determine the current stability of 30,000 acres of Atlantic coastal marshes. Staff and partners are using the latest monitoring technology and surveys to analyze current status, changes and trends for sandy beach shoreline, dunes, coastal marshes, and waterbird populations, which builds on data gathered more than a decade by the Refuge System’s Inventory and Monitoring (I&M) program. Collectively, this will provide critical scientific information to help manage refuge lands, waters, plants and wildlife for future conservation.

A Nelson’s sparrow and a saltmarsh sparrow at Barn Island in Conn. Credit: Chris Elphick/Associate Professor of Ecology and Evolutionary Biology

Elphick, who is a research partner in another Hurricane Sandy funded tidal marsh bird research project, says studying the saltmarsh sparrow can provide important information about the ecosystem as a whole. His work is connected to a program founded by a group of academic, governmental and non-profit collaborators known as SHARP – the Saltmarsh Habitat and Avian Research Program – which provides critical information for the conservation of tidal-marsh birds. Understanding saltmarsh ecology, Elphick says, also helps scientists understand how the resource contributes to a range of vital natural benefits, from human food consumption to recreation.

In the end, the simple truth is that the steps we take to conserve the saltmarsh sparrow’s home can help conserve our homes, too.

What do thousands of southern New Jersey students, millions of young oysters and Gandy’s Beach have in common? They all benefit from Project PORTS — Promoting Oyster Restoration Through Schools — an education and community-based oyster restoration program, run out of Rutgers University’s Haskin Shellfish Research Laboratory. 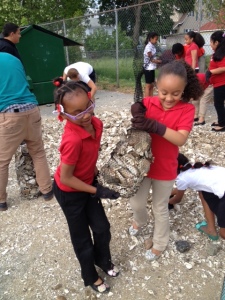 Whew…shell bags are heavy! First grade friends from the Boys and Girls Club of Vineland, N.J., help carry a shell bag they built to load on the trailer. Credit: Project PORTS staff

In 2013, U.S. Fish and Wildlife Service was awarded nearly $900,000 from Hurricane Sandy resilience funds through Department of the Interior towards a Gandy’s Beach shoreline protection project, which will improve the ability of the beach to withstand future storm surges and coastal erosion while helping to stabilize the decreasing oyster population. A portion of this work engages youth in oyster education and conservation at the Gandy’s Beach oyster reef breakwater project site.

Since this past March, the Service’s New Jersey Field Office has partnered with The Nature Conservancy (TNC) and Project PORTS to involve several thousand local students who are building nearly 15,000 shell bags. The bags will be placed by hundreds of local volunteers this fall just off the shoreline at Gandy’s Beach in Downe Township.

Gandy’s Beach is gradually disappearing, losing an estimated 500 feet of shoreline since 1930, based on TNC field observations and historic aerial images. The communities of Money Island and Gandy’s Beach have experienced increased flooding during high tide events and major storms due to the reduction of surrounding salt marsh and beach buffers. This also reduces habitat for spawning horseshoe crabs and foraging habitat for migratory shorebirds such as the rufa red knot, which is listed as threatened under the Endangered Species Act.

Katie Conrad, a fish and wildlife biologist at the Service’s New Jersey Field Office and project lead, says the work will construct nearshore oyster reef breakwaters along high energy shoreline, coir biolog living shoreline (logs of coconut fiber wrapped in mesh) on low energy sites, and hybrid living shoreline that uses both techniques in one location. “This will help stabilize approximately 3,000 feet of beach and tidal marsh shoreline, and ongoing monitoring will measure how well the oysters recruit on the different structures, so future restoration projects can benefit from what we have learned,” says Conrad.

The benefits of these living shorelines are three-fold: they help prevent erosion for wildlife and public recreational use; buffer coastal communities against impacts of future storms; and provide habitat for underwater species in the face of climate change and sea-level rise. 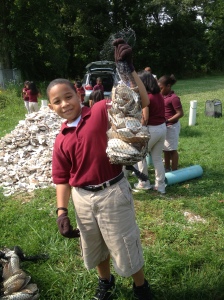 For the past year, project partner TNC has been collecting clam and oyster shells from restaurants during scheduled weekly pickups in Atlantic City, as well as a local surf clam processing plant in Millville, N.J., which delivered the shells to a management site maintained by TNC. The “cured” mollusks are then distributed to schools where students build shell bags. There is also a shell pile at the Haskin Lab in Port Norris, N.J., where they are stored or used for bagging activities with after-school groups such as scouts, homeschoolers and Habitat for Humanity teams.

Since mid-March, Project PORTS has engaged more than 650 students at several local southern New Jersey schools, teaching curious K-12 pupils about oyster anatomy, lifecycle and ecosystem benefits while building shell bags that will help prevent erosion and preserve wildlife habitat along the shoreline. Students work in teams of two or three and pull stretchy mesh bags over large diameter PVC tubes, then fill the tubes with shell to efficiently build bags.  “We were at a middle school just last week, and there were 6 classes of seventh graders who worked with us for an hour each, and built 722 bags in a day!” says Paterno.

“A class of 20, 4th graders can build 100 shell bags in a half an hour. Never underestimate the power of a fourth grader. They always impress us with their enthusiasm.” – Jenny Patnerno, lab technician and project leader for Project PORTS

Each bag measures approximately 17-inches long by 10-inches wide and weighs around five to ten pounds per bag. So far, over 3,000 bags have been built by participating students and there are six more Project PORTS partner schools scheduled for activities through mid-June.

As a leader of classroom education and shell-building activities, Paterno recently completed her Master’s thesis on the diverse species which inhabit the Project PORTS Gandy’s Beach subtidal oyster reef, such as striped bass, weakfish, croakers and blue crab. She plans to continue her work with Rutgers and Project PORTS as a lab technician, explaining the reason she enjoys her role in the project. “I really like education and outreach while doing the science and research, so when I get to incorporate those elements together, it’s really rewarding,” says Paterno. “Some kids have never been to the bay even though they live 15 miles from it. I like to inspire kids to be outside and get interested in science — and realize that becoming a scientist is definitely within reach and it doesn’t necessarily mean you’re a crazy white-haired, lab-coat clad man with bubbling test tubes,” she says.

Service partners along with an estimated 500 community volunteers will help construct the nearshore oyster reef breakwaters along the shoreline. The design will be broken into multiple sections and staggered, with each breakwater between 20 to 30-feet long, placing taller sections in front with the shorter breakwater behind it. “Oysters can live under both conditions in intertidal zones, sometimes covered by water, sometimes exposed to the air”, says Paterno. 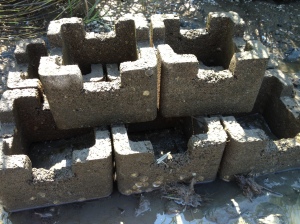 In addition to the oyster reef, man-made oyster castles will be placed along the shoreline as part of the restoration project. “The use of oyster castles, which are stackable concrete, blocks that make oyster reefs, will be used as we monitor oyster recruitment. With help from our partners, these living shorelines can help enhance oyster communities in the Delaware Bay,” says Conrad. Reef construction work is expected to start this August and both the reefs and oyster castles will be monitored for effectiveness by the Service and Rutgers staff after the project is completed.

Project PORTS is an education and community-based oyster restoration program, which targets elementary and middle school communities in New Jersey’s Delaware Bay Shore region, promoting hands-on activities that teach scientific concepts and emphasize the importance of oysters as a resource to the region.

Read more about the Gandy’s Beach effort in an overview of the federally funded living shoreline projects led by the Service, making progress in New Jersey, Maryland and Virginia.