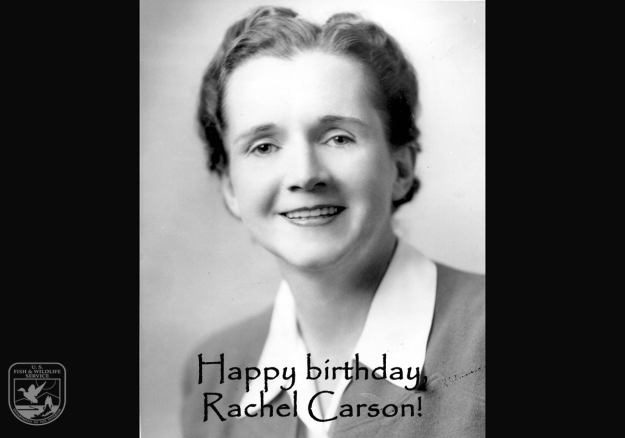 Posting our #WednesdayWisdom on this Friday, May 27, so we can say, “Happy Birthday, Rachel Carson!” May 27, 2016 marks the 109th anniversary of the birth of Rachel Carson, one of the world’s foremost leaders in conservation and former U.S. Fish and Wildlife Service employee. Her work as an educator, scientist and writer revolutionized America’s interest in environmental issues. Whether it was her passion for the oceans and coasts, her inspiration as one of the first female scientists and government leaders, or her overall footprint on the history of conservation, her legacy is certainly one to be honored and celebrated.

The Rachel Carson National Wildlife Refuge , headquartered in Wells, Maine, protects various kinds of habitat, including barrier beach, tidal estuary, dune, salt marsh and rocky coastline.  The piping plover, an endangered species, nests on refuge land.  The refuge was established in 1966 and was first known as the Coastal Maine National Wildlife Refuge, was renamed in honor of Rachel Carson in 1968, five years after her passing.

World Fish Migration Day is Saturday, May 21.  A day for creating awareness on the importance of migratory fish and keeping rivers open so fish can move freely from place to place.

What better way for #WednesdayWisdom to celebrate than with a glorious image from the Pawcatuck River right above the White Rock Dam on the border of Stonington, Conn. and Westerly, R.I.; the dam has since been removed by the U.S. Fish and Wildlife Service – in partnership with the Nature Conservancy and others – to enhance fish passage benefiting river herring, American shad, and American eel.  This Hurricane Sandy-funded dam removal project helps reduce the risk of flooding from future storms and significantly increases benefits to commercial and sport fishing.

Speaking of fishing:  Known for his book  A River Runs Through it and Other Stories, author and scholar Norman Maclean knew the metaphor of fly-fishing and salvation, and his stories reflect how nature and the beauty of the river becomes a sanctuary for renewal and connects family and community in a deep and abiding way.  We can only imagine his thoughts on restoring river connectivity and letting the rivers run free for the fish that spawn and migrate to and from there.

More on the White Rock Dam removal project and all Building a Stronger Coast projects!

International Migratory Bird Day (IMBD) is the second Saturday of May every year and this year we celebrate on May 14.  We snatched this poetic quote for today’s #Wednesday Wisdom from avian ecologist  Dr. Jeff Wells who is currently the Science and Policy Director for the Boreal Songbird Initiative.  The Boreal Songbird Initiative (BSI) is dedicated to outreach and education about the importance of the boreal forest to North America’s birds.

Jeff’s words reference the sublime sounds bird night migration. Did you know birds migrate at night to avoid predators and the atmosphere tends to be calmer?  As birds use celestial cues in the dark, we humans sleep unaware of the massive bird populations overhead.  Jeff has documented these migrations with many hours of recordings and especially in the boreal forest areas of North America.

Our silhouetted greater scaup image was taken at sunset by a FWS employee in the Warwick, RI area near the John H. Chafee National Wildlife Refuge.  It is a beautiful visual reminder how wildlife refuges are waystations along so many migration routes; the sweet light of dusk is a great time for photographing these nighttime travelers.  An estimated 55% of the Greater Scaup species’ North American population breeds within the Boreal Forest.

So “spread your wings for bird conservation” as the IMBD slogan says and learn more about the legislation that has protected birds over the years and especially the Migratory Bird Treaty Act.  #birdday