Happy Endangered Species Day! Our biologists team up every day with people across the Northeast to bring our over 100 protected wildlife and plants closer to recovery. Today we’re bringing you updates on a few projects that are doing just that. 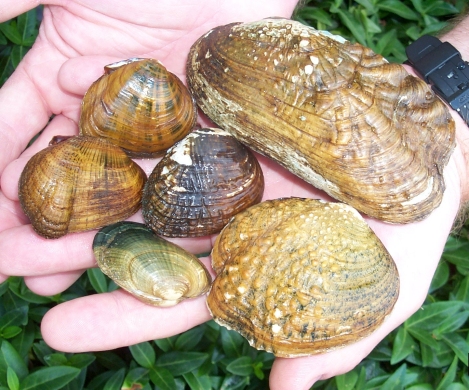 At the bottom of a river, a rock-like creature extends a single muscular foot from its shell. This creature – capable of filtering through several gallons of water per day – sounds like a sci-fi character but is actually a freshwater mussel. Mussels clean our streams, rivers, and lakes as they feed on small food particles and algae. If you find mussels, you can usually find good water quality. We are working to establish 2-4 new populations of four endangered species of mussel; the club shell, orange-foot pimpleback, spectiaclecase and purple cat’s paw on or near the Ohio River Islands National Wildlife Refuge. Together, with the help of 15 cooperators, the Service has already established 5 new populations of the clubshell mussel and successfully raised 3 different year classes of purple cat’s paw mussel. 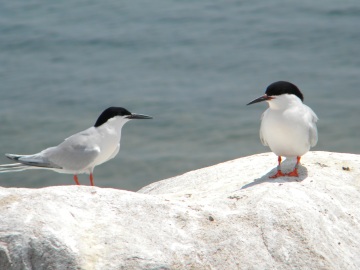 A pair of Roseate Terns on Gull Island, NY. Studies in 1975, on Gull Island, reported the hybridization of common terns and roseate terns. Similar crosses have not been documented since. Photo Credit: Sarah Nystrom

If you’ve ever been to Gull Island in New York or traveled along a saltwater coastline, you may have witnessed a Roseate Tern diving headfirst into the water after its prey. Six National Wildlife Refuges, Ecological Services and Coastal Program offices partnered with state agencies and non-governmental organizations are working to protect this Federal and state endangered species. These agencies are reducing the risks from predation, habitat loss, and disturbance to Roseate tern breeding and staging sites across the North Atlantic breeding range. 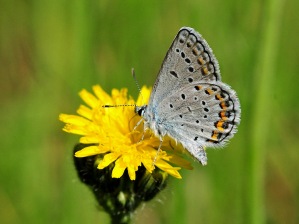 While adult Karner blue butterflies feed on the nectar of flowering plants, Karner blue caterpillars feed only on the leaves of the wild lupine plant. Credit: Joel Trick/USFWS

Karner blue caterpillars work together with ants, providing nectar in exchange for protection against the caterpillar’s natural enemies. 2-3 subpopulations of Karner blue butterflies are being restored on the Great Bay National Wildlife Refuge through habitat restoration, captive rearing and propagating lupine, to save the species from extinction. Funding has already allowed for prescribed habitat burns, the removal of fencing, lupine propagation and the release of 750 butterflies into the wild.

Plant species face extinction too! Seabeach amaranth is an annual plant species endemic to the Atlantic Coast from South Carolina to Massachusetts. The species has rapidly declined over the past 13 years from over 200,000 plants to only 1,320 in 2013 – largely due to climate change, sea level rise, development of beach front property and increased beach use. More than 3,800 seeds have been collected from four sites to establish more self-sustaining populations on 6 National Wildlife Refuges in areas less vulnerable to man-made threats.

These projects are funded by a special initiative in our agency called the Cooperative Recovery Initiative. The initiative was established in 2013 to restore and recover federally listed threatened or endangered species on national wildlife refuges and surrounding lands. It funds on-the-ground conservation projects that provide high conservation benefits.

Through the $6.86 million in CRI funding, the Service is working to recover threatened or endangered species across 27 states on or near national wildlife refuges. The 16 CRI funded projects will benefit a number of other species as well; including piping plover, bull trout and the Yellowstone grizzly.

For more information about Endangered Species Day – May 20, 2016, click here.

For more information about the 2016 Cooperative Recovery Initiative, click here.