Today you are hearing from Bill Perry who manages boating related grants for the northeast region. He loves to spend his free time on the water (usually in paddle powered watercraft).

Ever dream about spending 6 months on a boat traveling the world? Or possibly staying closer to home and traveling down the Intracoastal waterway for a few months in the fall? Or maybe a smaller dream of renting a boat that you could stay on for a week of vacation with a couple of stops to check out some seaside towns?

You probably don’t spend much of that dream time pondering the logistics of such a trip. Things like whether there will be a place to tie up for the night, where you will refuel, and whether there is access to a town with a decent restaurant or pharmacy along your route.

Along the coast, many marinas concentrate on providing seasonal boat slips. The owners can rent a spot to a boater for a fee for the season and have a guaranteed income stream from that dock or mooring. Renting to transients (those boats that happen to want to stop in for a night or a couple of weeks) is a less certain prospect. The possibility that there won’t be anything available along your majestic getaway or that you would not be able to secure a spot for the night when you really want to enjoy some time on land can make your trip less of a dream.

That’s where the Boating Infrastructure Grant (BIG) program tries to help. The BIG program provides funding to state agencies for tie-up facilities and associated amenities that are dedicated for use by transient boats greater than 26’ in length. State agencies, in turn, often partner or sub-grant funds to local communities, counties, or private marinas to build the docks and services that boaters need as they travel between locations. 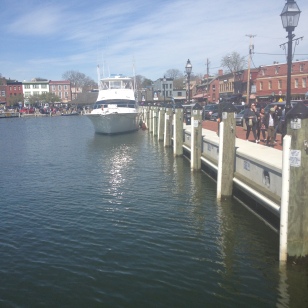 These stops are important opportunities not only for the boaters, but for local communities as well. More communities are looking for options to open their waterfronts and convert them from the working waterfronts of days gone by to attractions with scenic views, restaurants, and open space. Large transient boats bring revenue to these areas in the form of tourist dollars for local businesses, fuel purchases, and taxes.

In the northeast, we have some great opportunities for transient boaters to travel along the coast. For example, Newburyport, MA recently opened its transient boater facility along the Merrimack River that includes mooring opportunities for 6 transient boats, a boater’s lounge, and restroom and shower facilities. In addition, Annapolis, MD renovated transient tie-up facilities that provide opportunities to visit its downtown area. The State of Connecticut includes seven BIG funded locations along the Connecticut River that provide tie-up options. Yorktown, VA provides easy access to local restaurants along with restrooms for boaters at its BIG funded dock. The list goes on.

So, as you dream about that carefree time boating the coast, the BIG program is working to ensure that there will be places to keep you comfortable, well-stocked, and safe, when those dreams become reality.

Today’s blog was written by Richard Zane from the Wildlife and Sport Fish Restoration program. Richard came from a small farming town in VA who graduated with a B.S. from Virginia Tech and a M.S. from James Madison University. He has worked as a high school teacher, and a wildlife biologist conducting disease research, recovering endangered species, managing a National Wildlife Refuge and now managing Aquatic and Hunter Education grants for the USFWS.

On May 14th the Washington D.C.’s Department of Energy & Environment (DOEE) held their annual Family & Youth Casting Call at Fletcher’s Cove on the Chesapeake & Ohio Canal.  This kids fishing day had 295 kids participate along with 277 adults.  It was a gorgeous day, a break from all the rain that has hit the city over the past few weeks.  At the event there were 15 educational stations from fish printing to fly casting along with a great fishing opportunity along the canal with free bait and fishing rod use.

The DOEE Aquatic Education program is funded through the Sport Fish Restoration Act, which collects excise taxes on fishing equipment, motorboat and small engine fuels.  Currently DOEE is receiving over a half of a million dollars a year to support their aquatic education program.  Their programs are linked with local schools to meet the education standards for DC along with special events like this for the community.

Lucas enjoyed a day catching fish with his dad. 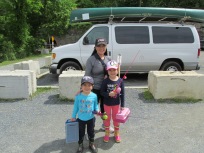 Morgan and Ryan were so excited to come to this event. They even bought special fishing poles for just the occasion, which actually help fund the event through the Sport Fish and Restoration Act. Just add worms and they are ready to fish. 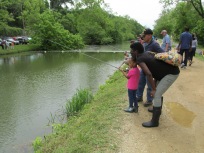 Little girl fishing with family and a Veteran that volunteered his time to help teach people fish.

This youngster loved fishing as long as the volunteer took the fish off the hook for her. She was so excited she pulled out her phone.

Today we’re hearing from Anthony Ortiz and Tanya Lama, of the University of Massachusetts Department of Environmental Conservation and Pathways Biological interns with the Division of Wildlife and Sportfish Restoration, about their recent experience studying black bears in the wild.

One of the authors of this blog, Tanya Lama, with a female black bear cub. Credit: USFWS

In late March, staff from the Northeast Division of Wildlife and Sport Fish Restoration (WSFR) were generously invited by Massachusetts Division of Fisheries and Wildlife (MassWildlife) to tag along on a black bear den visit. For many folks, even those with 25+ years of federal service, it was a first!

We gathered mid-morning to caravan together to the undisclosed location of the bear den – information which was picked up by MassWildlife via a GPS telemetry collar attached to the mother bear. GPS tracking has long been a part of black bear research and conservation in Massachusetts. Each collar is capable of recording the location of a bear over the course of two years. This highly valuable data helps biologists determine where bears spend their time foraging, rearing young, and hibernating.

Anthony Ortiz holds another black bear cub. They were only a couple of weeks old! Credit: USFWS

Upon arrival at the site, we waited in our vehicles while a small team of highly experienced biologists and game wardens approached the den. The mother bear was safely and temporarily sedated from within the den, and mother and cubs were carefully removed to collect biological data on sex, weight, age and health. At this time, our group was called in and escorted about 500 yards to the den site.

The bear den, nestled in a landowner’s backyard woods, lay under the tangled root mass of a large multiflora rose. Hidden from view, the space within the den was ample and insulated by heavy snow cover. Each bear was weighed and sexed – three female cubs, each weighing in at about five pounds in comparison to their 178 pound mother! The cubs were estimated at about six weeks old, and until then had never left the den.  Exposed to the crisp air and bright sunshine, the cubs held tightly to our bodies and tucked their faces into our warm jackets while they awaited their return to the den.

Black bear research and the associated den visits are part of the longest standing Wildlife Restoration projects supported by the Division of Wildlife and Sport Fish Restoration. Federal funds, administered through the Pittman-Robertson Wildlife Restoration Grant Program have enabled States to carry out black bear conservation work since the mid 1980’s. Black bear projects in the region include studies of wind turbine effects in Vermont, stable- isotope diet analysis in Massachusetts, and spatial ecology throughout the region.

The bear den, close up. Closer than I’d get, in fact. Credit: USFWS

This is the bear den from farther away. Not far enough in this writer’s humble opinion! Credit: USFWS

These biologists are working on the mother bear’s radio collar. She’s been safely sedated for the brief study. Credit: USFWS

Studying one of the three black bear cubs that were in the den! Credit: USFWS

The objectives of these studies have generally examined habitat use, home range, survival of adults and cubs, sources and rates of mortality, important landscape corridors and genetic profiles of bear populations.  Maine, Pennsylvania, and Massachusetts have the longest running bear monitoring projects in place, tracking bear movements via radio collars for the past 30 years. Information collected during den visits is used to write statewide management plans for bears and to adjust hunting season regulations.  Black bears are classified most often as a big game animal in the Northeast Region, but sometimes as a furbearer elsewhere.

There are regulated hunting seasons in the fall, and most states have over 15 regulations in place for bear hunters.  Black bears are sought for their meat, for their pelts, as rugs, taxidermy mounts, claw and bone jewelry, and the fat is used in cooking and in water proofing leather. The sale of bear meat is prohibited under most state laws – a reminder that we value our wildlife intrinsically and not for profit.

As students of wildlife conservation and part of the WSFR team – it was a pleasure to witness some of our federally funded conservation work on the ground. Many thanks to the MassWildlife biologists and environmental police officers for sharing their knowledge and experience with us!