This story was originally published on our new Medium blog platform

This year’s severe storms underscore the power of nature and the vulnerability of our coasts. While nature can destroy, it can also defend. Supported by federal funding for Hurricane Sandy recovery, we’re working with partners to restore and strengthen natural systems that provide not only habitat for wildlife, but also protection against rising seas and storm surge. This is one in a series of stories highlighting results of our ongoing efforts to build a stronger coast.

On October 29, 2012, Hurricane Sandy plowed ashore near Atlantic City, N.J., with sustained winds of 75 miles per hour. In its wake, state officials declared it the most destructive natural disaster in the history of New Jersey. It changed communities dramatically.

There were flooded roads, fallen power lines, and 346,000 damaged homes.

Natural features of the coastline underwent significant changes too, but in some cases, those changes presented new conservation opportunities that could protect people and wildlife in the face of future storms.

“We were able to identify places where piping plover habitat had been enhanced by the storm,” explained Todd Pover, a senior biologist for the Conserve Wildlife Foundation of New Jersey who has been involved in monitoring the federally threatened shorebird for 25 years. Places like Edwin B. Forsythe National Wildlife Refuge, where the storm erased the dunes in a three-quarter mile stretch of beach, creating an open expanse from ocean to bay.

Senior biologist for the Conserve Wildlife Foundation of New Jersey Todd Pover releases a piping plover, a species he has helped monitor for 25 years. (Jim Verhagen)

“It’s what we refer to as an overwash fan,” Pover said. “The most desirable habitat for plover.”

It was a good sign for the future of these birds in New Jersey. Although the number of nesting pairs along the Atlantic coast has nearly doubled since piping plover was placed on the Endangered Species List in 1986 — the species has since been downlisted from from endangered to threatened — New Jersey’s breeding population has failed to launch by comparison. There were 94 nesting pairs in the state in 1986. In 2017, there were 105.

Piping plover with a chick on sandy beach. (USFWS)

It was also a good sign for the New Jersey shore. Those overwash fans where piping plover like to nest are the product of wind and wave action continually reshaping the coastline, sometimes dramatically as in Sandy. Allowing coastal processes to play out naturally in areas like these helps absorb impacts of future storms.

But although the creation of habitat gave biologists a reason for hope in the wake of this storm, it also gave them a reason to plan ahead next time. Agencies that typically respond to natural disasters, like the Federal Emergency Management Agency and the National Oceanic and Atmospheric Administration, follow standard operating procedures — a sort of playbook that identifies roles, responsibilities, and actions to make sure all the bases are covered.

Assistant professor of ecology at Rutgers University Brooke Maslo focuses on developing science to support habitat for beach-nesting shorebirds, including piping plover, black skimmer, and American oystercatcher, the bird in her hands in this photo.

“There wasn’t a similar protocol for biological conservation,” Maslo said. If there was a way to quickly assess and communicate benefits for endangered species, they could incorporate that into the response process too.

Now, thanks to collaboration between Rutgers and CWF New Jersey, there is.

With support from U.S. Fish and Wildlife Service Hurricane Sandy resilience funding, the partners have developed a standard assessment protocol for identifying opportunities to protect functional beach habitat after big storms based on what they learned from the last one.

They started by comparing nesting habitat for four beach-nesting species — piping plover, American oystercatcher, black skimmer, and least tern — before and after Sandy.

“Where did habitat persist? Where was it lost? Where was it newly created? We wanted to be able to quantify habitat changes that occurred as a result of the storm, and to quantify the new habitat areas that could be prioritized for conservation,” Maslo said.

The results have already proven useful as a screening tool when working with communities to develop beach management plans — mandatory for towns that receive federal funding to protect piping plover.

“We suggest what could be the most suitable habitat based on the results, and they give us feedback about what they know to be true about that site on the ground,” Pover said.

It also helps natural resource managers plan for constant change. “The beach will change, so creating set-aside areas interspersed throughout the state gives the birds someplace else to go when it does,” Pover said. 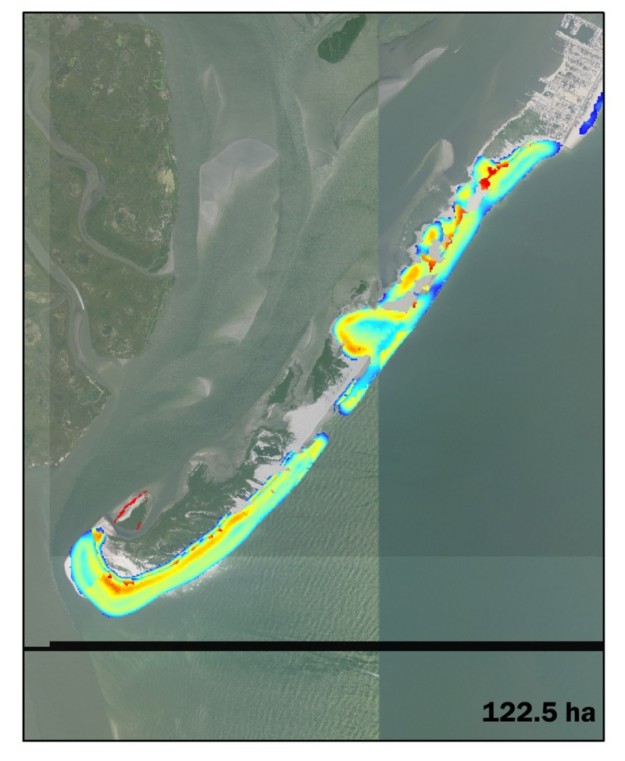 A map showing habitat suitability for piping plover at the Holgate unit of Edwin B. Forsythe National Wildlife Refuge after Hurricane Sandy. Any area in color in the above image is considered “suitable”, with warmer colors indicating higher suitability. (Maslo)

It’s like habitat insurance for plover, and it’s clear they will make the most of their safety net. Although most of the new habitat created by Hurricane Sandy was stabilized to pre-storm conditions, resource managers were able to let nature take its course at the site at Forsythe — a wilderness area where no human infrastructure was at stake.

“In the years after Sandy, we went from 12 to 25 pairs at that site,” Pover said. With a secure place to nest, the birds became more productive, with twice as many fledglings as a typical pair in New Jersey.

“Forsythe is a poster child for what could happen if we protect these sites,” he said.

Biologists now know what to look for in potential nesting sites. With the protocol, resource managers, landowners, and town officials can look for these opportunities in their own communities as well.

And because it was developed with input from agencies like NOAA and FEMA that are on the front lines after a natural disaster, the protocol will help factor benefits for wildlife into the existing response process. That will benefit people too. Wildlife tend to good indicators of threats to communities, or as in New Jersey, a sign that they have reason to hope.