Some conservation practitioners might question how a regional conservation plan covering a 15-state area could apply to their local communities. Rick Huffines is not one of them.

“No matter what scale you are working at, we all have compatible conservation goals as part of a shared landscape,” says the Executive Director of the Chattanooga-based Tennessee River Gorge Trust. 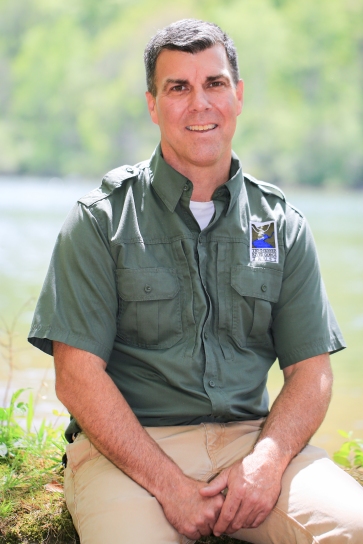 He knows because he has worked at both ends of the spectrum. Huffines came to the Trust after retiring from a 26-year career with the U.S. Fish and Wildlife Service, where he last served as Deputy Regional Chief of the National Wildlife Refuge System in the Southeast. In that transition, his jurisdiction went from about four million acres across 10 states, Puerto Rico, and the U.S. Virgin Islands, to the 17,064 acres protected by the Trust.“As a small organization I don’t have access to the information, science, or infrastructure that I was accustomed to when working for the Service,” Huffines says.

But now he has NatureScape, an online landscape conservation design that delivers maps, datasets, and analytical tools designed to help partners working at any scale identify the best opportunities to advance conservation locally and regionally.

Supported by the Appalachian conservation partnership — which includes representatives from federal, state, tribal, academic, and nongovernmental organizations — NatureScape reflects the needs, goals, and values of members of a diverse regional conservation community because they directly informed its creation.

“Every target that is included in the design framework was something that bubbled up from conversations involving more than 60 experts and stakeholders in the region,” explains Paul Leonard, a computational ecologist who developed the modeling foundation for NatureScape as part of his dissertation research at Clemson University.

Although he completed his degree, Leonard has continued to build upon that foundation. He and his graduate and postdoctoral advisor Rob Baldwin, Professor of Conservation Biology at Clemson, and Daniel Hanks, a post-doctoral researcher in the Clemson’s Forestry and Environmental Conservation Department, just published a paper in Scientific Reports — an online journal from the publishers of Nature — describing how they developed a new modeling approach that captures the dynamics of aquatic systems and integrated it into the conservation design.

Sounds pretty impressive, right? In the field of conservation, it’s actually momentous. Here’s why: Aquatic systems and terrestrial systems are thought of in terms of different units, and analyzed based on different characteristics. For researchers who are trying to model the interactions between these systems in the real world where they overlap, that creates a problem. How do you relate what’s happening in a stream reach to what’s happening on the surrounding landscape, or farther downstream?

It’s like comparing apples and oranges, and until now, scientists haven’t had the computational tools to help reconcile these differences for practitioners. With support from the Appalachian partnership to fund the researchers at Clemson to figure out how to use supercomputers to marry different models into a single prioritization approach that better represents what is actually happening on the ground.

“The goal was to provide a tool that could offer decision support to people who are already looking at this landscape and trying to figure out how to best allocate resources,” says Baldwin.

People like Huffines, who points out that just because the pixels in the NatureScape maps are “big” relative to his jurisdiction doesn’t mean they aren’t informative. “The science provides options and information that I can apply based on our own ground truthing of the data,” he says.

It’s also just the beginning. “We know better data are coming, methods are improving, and that conservation outcomes are a moving target,” explains Leonard. “This is a never ending plan, and we have lots of flexibility to use local data to refine it.”

“When we looked at the Appalachian region, the Tennessee River Basin popped out for a variety of reasons,” explains Baldwin. Chief among them, its rich biodiversity and strong legacy of conservation: The ideal parameters for a tool like NatureScape, which can help partners identify places where they can leverage resources to make a bigger collective impact.

More than just a catalog of data products that people can pick and choose from, NatureScape was envisioned as a sort of consultation service to tailor information to the needs of partners, while making sure it still fits within a regional framework.

Just ask Huffines. He first connected with the partnership because he was interested in using a regional climate change vulnerability assessment — which is also rolled into NatureScape — to evaluate ecological communities in the gorge. “They helped us downscale the information to create something that would be relevant to the population in Chattanooga,” he says, explaining that they developed a 35-year climate vulnerability model and a 75-year climate vulnerability to capture time frames that would be meaningful for the two largest age demographics in the community.

“They helped us translate the information to make it understandable and applicable.”

Now that the complete NatureScape tool suite is available online, Huffines wants to use the information to create a model that can help the Trust refine its land-selection criteria and justify prioritizing certain parcels for acquisition. “It can show us local areas that fall within important regional corridors for fish and wildlife, and it can give us the information to say their importance is tied directly to species we care about, like green salamander.”

Whether you care more about green salamander or green space, NatureScape provides datasets and tools designed to meet the needs of a diverse conservation community. Photo: FWS.

If salamanders aren’t your thing, NatureScape also shows you areas that are tied to numerous environmental benefits for society — like clean water, access to natural areas, and unique species and habitats found only in this region — that are included in the conservation targets underlying the design.

Leonard points out that Huffines former employer can use NatureScape similarly to connect the dots between specific projects and overarching mandates. “As of now, many FWS programs operate independently,” he explains. “The benefit of NatureScape is that it allows you to look for places where the interests of different programs overlap to ask: Where should we focus to get the most bang for our buck?”

No matter what scale you work at in conservation, finding the answer to that question is mission critical.

“We have all been thinking about those kinds of large questions from the beginning, and now we are beginning to be able to answer them,” says Leonard.