Beneath the surface of the water, embedded in the bottom of rivers and estuaries lie thousands of little suspension-feeding bivalves called freshwater mussels. They are a fascinating group, with a unique role in our freshwater ecosystems. The presence of mussels benefits all the life around them, and in return, they receive a little help from their fishy friends.

Mussels begin their life in an unusual fashion with males releasing gametes into the river to an awaiting female. The female captures these through normal filter-feeding; her eggs are then fertilized in special “brood chambers” in the gills called marsupia. Once fertilized, a female mussel will carry her developing larvae for several months. For the larvae to complete metamorphosis, however, the female mussel must attract an unsuspecting fishy host. With her flashy mantle tissue, she puts on a show, and the performances are impeccable!

Like an improvisational dancer, disguised as some delicious food item – black fly larvae or other insect larvae, a small minnow, or perhaps a crayfish- 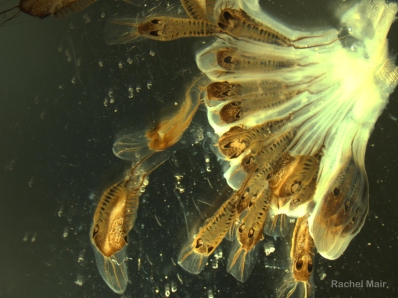 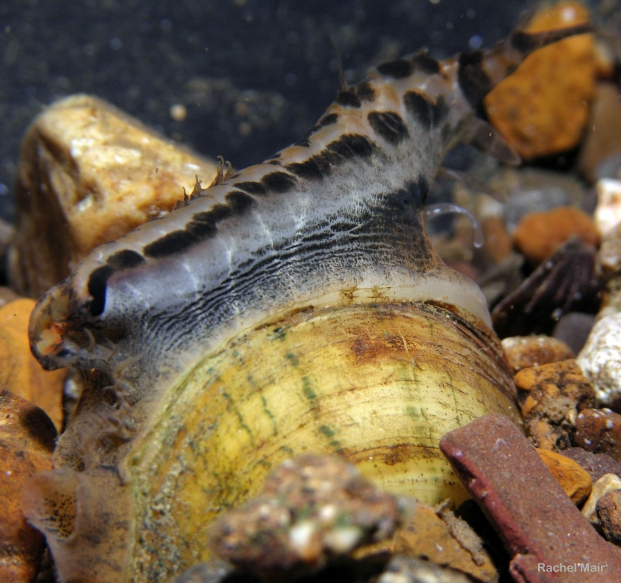 undulating and waving in the water, she captivates her audience.

Or like an expert fly fisherman, she casts out a delicious lure. (Barnhart, M. C.  2008. Unio Gallery)

When the fish approaches, she expels her parasitic larvae at the unsuspecting fish, where they get lodged in the fish’s gills. The young mussels drop to the river bottom after a few weeks, with no harm to the fish. This is where the real magic happens! 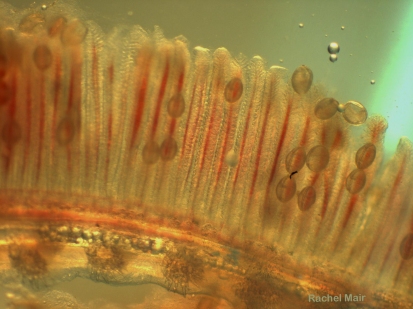 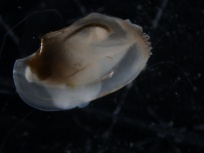 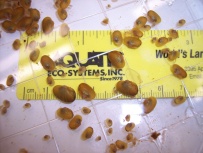 There’s more to these fish-charming bivalves than their underwater showmanship, they also take out the trash, clean the water and stabilize the foundation of the community for all the other aquatic critters living near them. Indeed, freshwater mussels play an important role in engineering the ecosystem. Like cobbles and rocks, they help stabilize the river bottom during high flows. And they help aerate sediments with their movements. But these shells aren’t just pretty rocks; they’ve got gills and guts! By recycling nutrients into the food web they provide food for other aquatic life, while also creating habitat.

Freshwater mussels are also one of nature’s greatest natural filtration systems. “A single freshwater mussel typically filters 5 to 10 gallons of water per day, 365 days a year” reports Dr. Danielle Kreeger, Science Director for the Partnership for the Delaware Estuary. She added, “Since healthy mussel beds can contain tens of thousands of mussels per acre, they function like natural water treatment plants that help keep the water clear and remove many types of pollutants.” Imagine 10,000 mussels filtering 10,000 gallons of water a day. Now imagine all that happening over 300 miles in a river such as the Allegheny or the Susquehanna or the James. 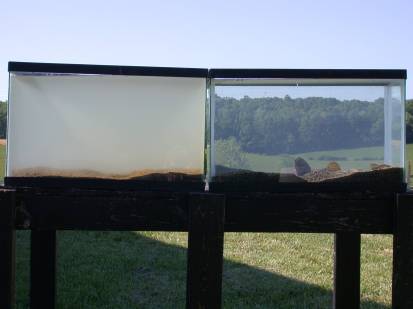 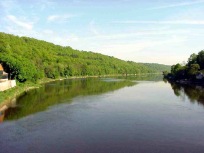 By feeding on microscopic particles that cause turbidity, freshwater mussels remove vast quantities of algae, bacteria, nitrogen, phosphorus and other chemical compounds in the river. And what they don’t use is repackaged into little organic baskets of food for organisms like aquatic insects, which are valuable food items for fish, or aquatic fungi that facilitate decomposition processes in the river. Put it all together, and where there are mussels, you find more aquatic insects and more fish and better water quality. 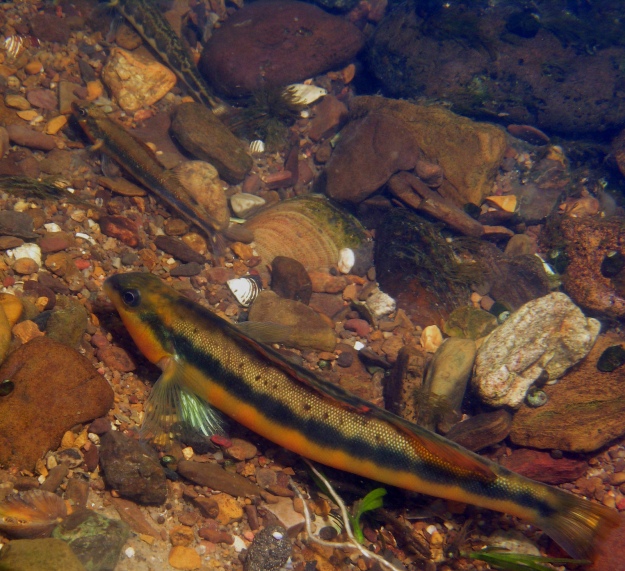 Tangerine and gilt darters near Dromedary pearl mussel (Dromus dromas) in a bed of other mussel species. Credit: Rachel Mair/USFWS

Catherine Gatenby is a tap-dancing biologist turned communications coordinator for our fisheries program. She grew up in Minnesota surrounded by lakes and rivers and music–everything her family did involved music, dancing, fishing or swimming. Some day she plans to write about a real “river dance.”