Susan Adamowicz, Ph.D. and Nancy Pau have been working with local communities to defend coastal ecosystems against storms in the wake of Hurricane Sandy. The two biologists are key players behind invasive species removal and high salt marsh restoration projects at Parker River National Wildlife Refuge.

Local communities and landowners play a major role in the success of these projects. Pau cites local conservationist and Town of Newbury selectman Geoff Walker as an example.

“There is only so much we can do on protected lands to address resiliency issues,” she says. “A lot more can be done off refuges through decisions made by landowners and towns, especially as towns think about resiliency projects of their own. Having people like Geoff involved, people who understand the big picture of the marsh and how dependent the towns are on the natural ecosystems, is really great. He can speak to the issues that are important to the town.”

Collaboration between biologists and landowners is important when it comes to protecting vulnerable natural areas from storms and sea-level rise. Adamowicz says the high salt marsh habitat is crucial to helping people and wildlife alike withstand and recover from events like Hurricane Sandy.

Healthy salt marshes also serve as nurseries for fish that support offshore fisheries and support birds such as the saltmarsh sparrow, black rail and black ducks, which rely upon this unique habitat.

This work will allow future generations of wildlife and people to call the shoreline home — and that benefits everyone. 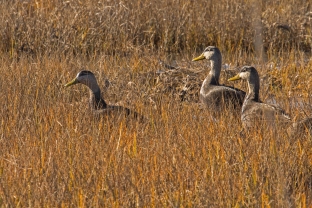 The work of biologists and partners to restore high salt marsh is important to both human and wildlife communities. In addition to supporting coastal resiliency, the marsh acts as a nursery for small fish that support offshore fisheries. American black ducks seek solitude and refuge in salt marshes like these, which provide critical wildlife habitat along the Atlantic Flyway.

Nancy Pau is a wildlife biologist at Parker River National Wildlife Refuge. Much of her work focuses on restoring resilient salt marsh habitats in the aftermath of Hurricane Sandy. One way she restores resiliency is removing invasive plants, like perennial pepperweed and Phragmites in the Great Marsh. Here, Nancy poses along Plumbush Creek, with Plum Island Turnpike’s drawbridge and causeway in the background.

Historically, this bridge spanned the width of Plum Island River, which connected Plum Island Sound to the Merrimack River. When it was upgraded, fill was placed on the sides of the bridge that limited the amount of water entering and exiting Plum Island Sound. Biologists are using models to look at ways to restore more natural flows under the bridge.

Looking inland across the salt marsh at sunrise, you can see sturdy grasses and shrubs that protect sand dunes from erosion. The marsh protects coastline property by buffering waves and swallowing storm surges, while also providing habitat for wildlife.

Working with partners, volunteers, and landowners is essential to the success of these interrelated projects. The U.S. Fish and Wildlife Service can do only so much on protected land. Working with volunteers like Geoff Walker, a conservationist, long-time hunter, activist, and selectman in nearby Newbury, helps conservation organizations accomplish more within the community.

An immature bald eagle soars above the salt marsh, scanning for prey.

Perennial pepperweed is an invasive plant newly colonizing salt marshes on the East Coast. With seeds that spread with the tides, it readily out-competes native marsh plants, decreasing biodiversity. Pepperweed has been eradicated in many parts of the refuge. The focus is now on eliminating it throughout the Great Marsh watershed and other sites in New England.

Monitoring erosion in the marsh is vital to understanding the way water and sediment move throughout Plum Island Sound. Scientists believe that marsh erosion is an integral part of a resilient marsh. In systems with low sediment supply, when sediment from these eroding banks gets deposited on the marsh surface, it will help marshes keep pace with sea-level rise. 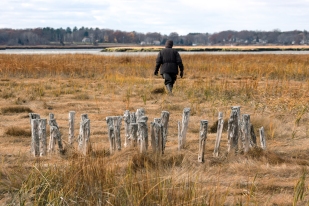 Susan Adamowicz walks through the salt marsh beyond the remains of one of the refuge’s many relic “marsh hay” “staddles,” or platforms.

Natural landscapes and human-built structures are both important for protecting coastal homes and residents from the threat of storm surges. Together, they make a more resilient coast.

All photos by Steve Droter